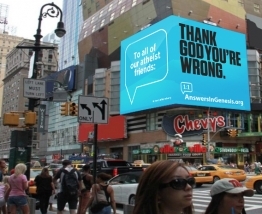 Answers in Genesis, a creationist group that promotes the belief that the world is only 6,000 years old and that “God did it”, has been putting up billboards in New York City and San Francisco with the purpose of engaging atheists. They read (as you can see from the picture) “To all of our atheist friends: Thank God You’re Wrong” and also have a URL to the Answers in Genesis website.

Ken Ham, the founder of this group of kooks, is quoted as saying …

“The atheists have been pretty aggressive in putting billboards up across the nation and some of the billboards have been very much focused on attacking Christianity,“

“billboards” = “Aggressive” … LOL, he is quite clearly a nut, ah but you had probably already worked that out.

OK, so obviously as a non-believer, I’ve been clearly invited over to his website to be shown some “evidence”, so let’s pop on over and take a look.

They start off with “How do we know there is a god? Ah, good start, so lets see what we have.

The first paragraph consists entirely of bible quotes and nothing else.

What can I say except to observe that they have no idea what the word “evidence” actually means. The bible is of course a claim, and it not evidence.

This is essentially a declaration as follows – “we cannot prove by any human standard “. Their “proof” is that they admit they have no actual evidence at all … seriously!!

They expand and explain …

So, even if we could observe and scientifically test God by our own standards of operational science, we would be unable to prove all of His divine, eternal attributes because of our own limited mortality.

To be frank, nobody is asking for “all”, that would be just daft, “any” would be just fine. The problem here is that they claim that there is a god that manifests in our reality, so some evidence should be available, but apparently no, so far all we have been presented with is exactly “none”.

Ah good, so we get some evidence after all, here we go then, and the evidence is … lots more bible quotes.

Yes it is time to face-palm.

The twist here is a claim that there were “fulfilled prophecies” … except for the rather inconvenient fact that a truly honest appraisal shows that to not be factual at all.

That claim is debunked here on RationalWiki.

The fact that this claim has indeed been robustly debunked, and that this debunking in the public domain has been ignored and swept under the carpet shows a complete lack of any honesty or integrity on their part.

They then move on to argue as follows:

So essentially the argument is … “gosh, look how complex everything is, I have no idea how everything could have happened naturally, so obviously my specific god concept did it“. The fun point here is that you can use this as “proof” for anything at all. Pick any god concept you like, or even a magic pink unicorn, hyper-dimensional aliens, time travellers, whatever you can dream up, and then claim … “nope no idea how it happened naturally, hence X did it“. This of course is simply an appeal to ignorance and tells you nothing at all about reality.

The problem with this claim is that the non-believer “rejects the truth” for the rather obvious reason that embracing their “truth” is akin to a gullibility test due to the lack of any actual verification of anything they claim.

Yes, they have a summary, but like the rest of their “proof”, it is essentially content free religious babble. What is rather surprising about all of this is that they actually bothered to go to the considerable expense of putting up billboards that then link to all this non-“proof”. So who exactly are they attempting to convince here? Clearly anybody who is a non-believer is not going to find any of this to be anything except laughable, so the only people actually being successfully fooled are themselves or those that support them financially. Now perhaps that last bit explains it a bit, being seen to do stuff like this perhaps encourages their financial supporters to maintain that role.

For those familiar with them, none of this is an actual surprise. They promote some truly wacky stuff such as the claim that dragons are real (yes really), and also that unicorns are real (yes, once again they really do). I guess it makes sense in a crazy sort of way, if you are going to buy into myths that have no evidence, then you might as well jump fully into a fantasy world that is only 6,000 years old and is populated with dragons and unicorns.

Convinced  by the evidence? … nope, neither am I and nor is anybody else.