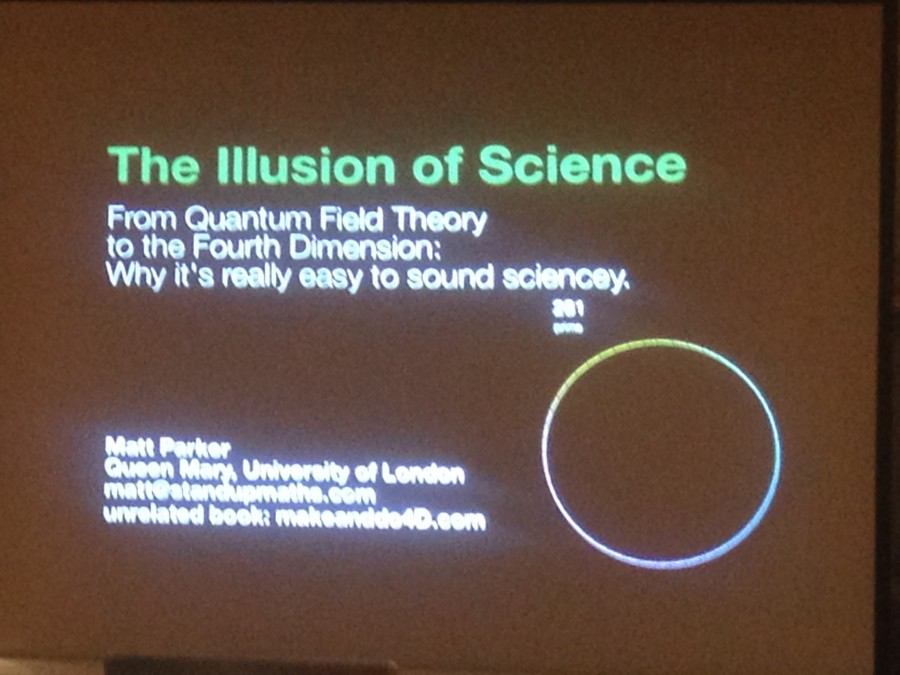 So I attended a great talk last night that took place at Reading Skeptics in the Pub by Matt Parker, a mathematician, stand-up comedian, and skeptic. It sounded fun, and even if the maths went zooming over the heads of all, the standup comedy would still make it worth attending.

It was indeed great fun, and Matt took us all on a fascinating journey then went via Conservapedia, Rubrics cube, a maths formula that actually when run rendered itself, oh and we also had fun tying our shoelaces and cutting up bits of paper in a rather amazing way (make a mobius strip, cut it down the middle right around and you still have just 1 mobs strip, and other similar mind blowing illustrations that what you think will happen is not what will actually happen at all).

The key message was this – it is very easy to be fooled by stuff that looks and sounds sciencey and so when you look at troll central such as Conservapedia, you find it is littered with anti-science stuff that does quite successfully fool many. The science literate might indeed laugh at such nonsense, but we should not be so smug because we can also be fooled.

Matt put up two paragraphs for us to look at …

Without knowing which was which, we got to vote and pick the one we thought was the fake.

What was interesting is that the room was evenly split almost 50/50, so clearly half the room got it wrong and had indeed been successfully fooled by sciencey sounding stuff.

Now remember, this was in essence a self-selected crowd of skeptics and science geeks, so if we could be so easily fooled, then anybody can be fooled, and that includes you.

So how can we ever really know?

If something is inside your area of expertise, then you would most probably nail it immediately, but if it is outside your field, then all bets are off. So if you truly don’t know then ask yourself what the consensus is amongst the subject matter experts.

Evolution is a topic that many often rant against with sciencey sounding arguments that most biologists would laugh at, and while many religious people reject the evidence, 99.97% of life-science scientists don’t, and that includes the religious ones.

Climate change is another area where a percentage of the public are swayed by sciencey sounding arguments, and yet once again, 97% of climate scientists, the guys familiar with the evidence, have no doubts.

You can and will be fooled, so be skeptical.