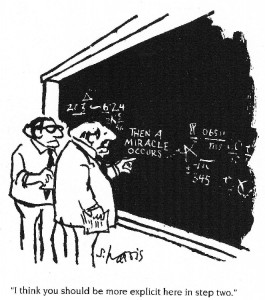 The first most obvious question might be who? Well, Eric Weinstein is a Harvard math Ph. D. who has been working as an economist in New York.

The news here is that he has been working on some of his own far out of the mainstream ideas about geometry and physics for decades, and … no wait, don’t roll you eyes and sigh, “another crank”, because what he has is interesting enough to be of interest to some. He gave a lecture in Oxford, something that was arranged by Marcus du Sautoy (the Simonyi Professor for the Public Understanding of Science and a Professor of Mathematics at the University of Oxford).

Now, before we go any further, how has the media reacted?

OK, so what exactly is the claim?

I’ll not go too far into the details, but basically New Scientist puts it like this …

…all the problems plaguing physics have been solved. Dark matter, dark energy, quantum gravity – one amazing insight has delivered us from decades of struggle to a new knowledge nirvana.

And of course there is a wee problem …

I’m unable to tell you what that insight is. Neither I, nor any of my professional physicist friends, have the faintest clue. In fact, nobody except Eric Weinstein and mathematician Marcus du Sautoy are sufficiently familiar with the claims to venture an opinion.

If this all sounds familiar, then you would be right it is indeed, for here we have science being done by press release (Hint: cold fusion), and also a lecture. As Marcus du Sautoy explains, “I’m trying to promote, perhaps, a new way of doing science. Let’s start with really big ideas, let’s be brave and let’s have a discussion,” … er, that might not be such a good idea …

If you are going to give a presentation in the Physics department at Oxford university that claims to discuss a solution that solves many of today’s big physics problems, it might actually have been a cool idea to invite a few of the resident Oxford physicists. They were close by in a room not too far away listening to another speaker talk about a new source of CP violation in charm physics, and no they did not boycott this, they simply were not invited.

So lets suppose they had been, how exactly would that “discussion” have worked? Because there are no published papers on any of this, the nitty-gritty mathematical details would have been … “surprise surprise … here you go”. But this is not the sort of stuff you can discuss without actually pondering over it first.

Even if it is all true and factual and Mr Weinstein has indeed truly got a good idea (that is still a possibility), a press story is not the way you do science. I would have thought that the cold fusion fiasco would have taught us that lesson long ago … but apparently not.

It does perhaps in some ways also remind me of Garrett Lisi, the surfer and theoretical physicist who gained fame at one point for his “An Exceptionally Simple Theory of Everything,” paper that proposed a unified field theory based on the E8 Lie group, combining particle physics with Einstein’s theory of gravitation. It drummed up a lot of excitement at the time (2007), but is not widely accepted by the physics community. Why not? Well because his theories are incomplete and did not make enough predictions that could be tested in experiments. Mt Lisi himself does acknowledge this and states that his paper “cannot be considered much more than a speculative proposal“.

Garrett himself commented yesterday on Eric Weinstein’s work as follows …

Eric’s been working on this for a long time — I’m happy he’s now publicly airing some of his ideas. And I’m looking forward to seeing what he puts on the arXiv.

The watch words are “Paper, or it didn’t happen”, and so Mr Weinstein plans to put a manuscript on the Arxiv preprint server.

Ah but what do the Subject matter experts think?

Well, this is where it gets interesting, because those that have dug into all this do find that it has merit, in other words he is not just a crank, there may real substance and coherence here …

David Kaplan, a particle theorist at Johns Hopkins University in Baltimore, has seen and discussed some of Weinstein’s ideas with him. On the plus side, Kaplan says it is “phenomenal” that someone coming from outside academia could put together something so coherent. “There are many people who come from the outside with crazy theories, but they are not serious. Eric is serious.”

But he says the theory is incomplete and should have spent more time being critiqued by academics before receiving any wider public attention. “What I would encourage him to do is modest things and take steps and commit to a physical manifestation of his theory – to say ‘here is a set of instructions and a set of equations, do this calculation and you can make the following predictions.’ And then see if his theory matches with the real world or not. He doesn’t have enough of a case. What I’d like him to do is to keep working.”

Edward Frenkel, a mathematician at the University of California, Berkeley, has been discussing Weinstein’s ideas with him for the past year. “I think that both mathematicians and physicists should take Eric’s ideas very seriously,” he says. “Even independently of their physical implications, I believe that Eric’s insights will be useful to mathematicians, because he points to some structures which have not been studied before, as far as I know. As for the physical implications, it is quite possible that this new framework will lead to new answers to the big questions, after necessary work is done to make precise predictions which can be tested experimentally.”

Jim al-Khalili, a nuclear physicist at the University of Surrey who has seen a summary of Weinstein’s ideas (but not the maths) is sceptical. He says Weinstein will need to do a “heck of a lot of convincing” if he wants physicists to take his ideas seriously. “My main concern with Weinstein’s claims is that they are simply too grand – too sweeping. It would be one thing if he argued for some modest prediction that his theory was making, and importantly one that could be tested experimentally, or that it explained a phenomenon or mechanism that other theories have failed to do, but he makes the mistake of claiming too much for it.”

So while he may indeed have got off on the wrong foot here by attempting to engage in a rather odd way with the community, what he has is sufficiently interesting to motivate some to have an interest here.

So is it really possible for an outsider to have ideas which fundamentally alter our world view, no of course not. Oh wait, there was some chap who worked as a clerk in a patent office in Switzerland, now what was his name again? OK, that is too simplistic, our Swiss clerk had a Ph.D and had already published other papers, so yes we are back to the missing bit here …

“Paper, or it didn’t happen”

At what point during this long and difficult process does it become legitimate to proclaim a breakthrough? It’s a line in shifting sands, but that line has certainly been crossed. Du Sautoy – the University of Oxford’s professor of the public understanding of science, no less – has short-circuited science’s basic checks and balances. Yesterday’s shenanigans were anything but scientific.

But to be strictly fair, if interested in the details of Mr Weinstein’s thinking, then you can read about it here in Mr Du Sautoy’s Guardian article (but remember to digest with a pinch of salt). Or perhaps also by browsing his 2012 Edge article here (you will need to scroll down to find it).