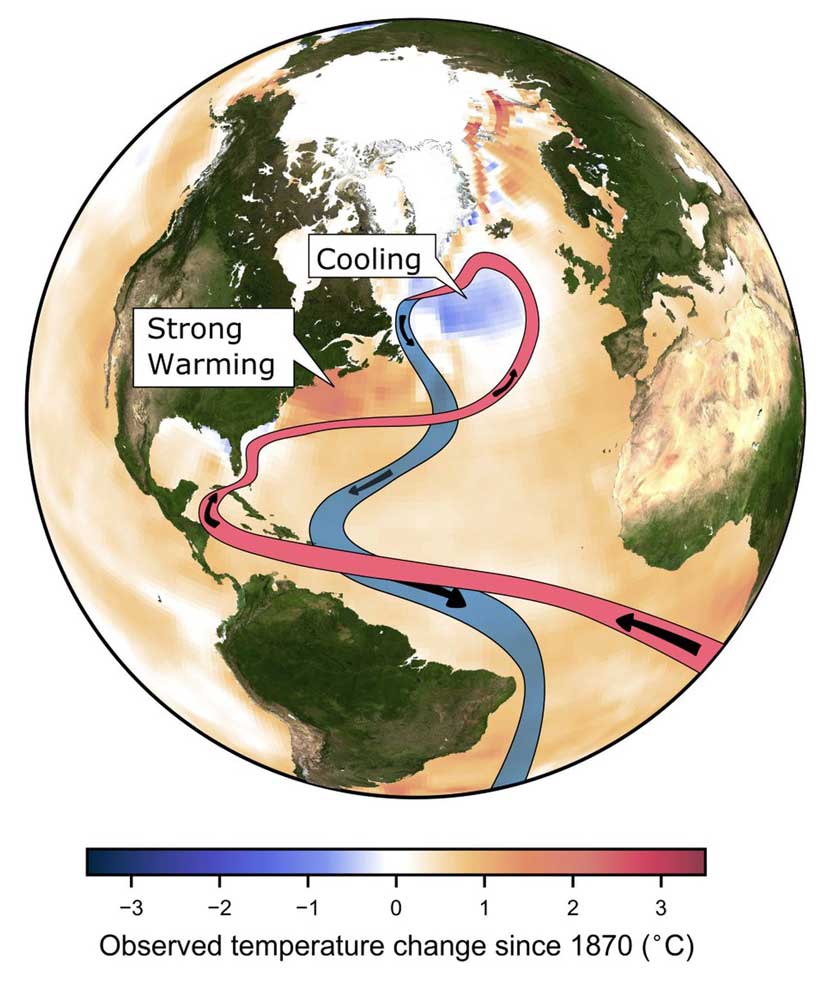 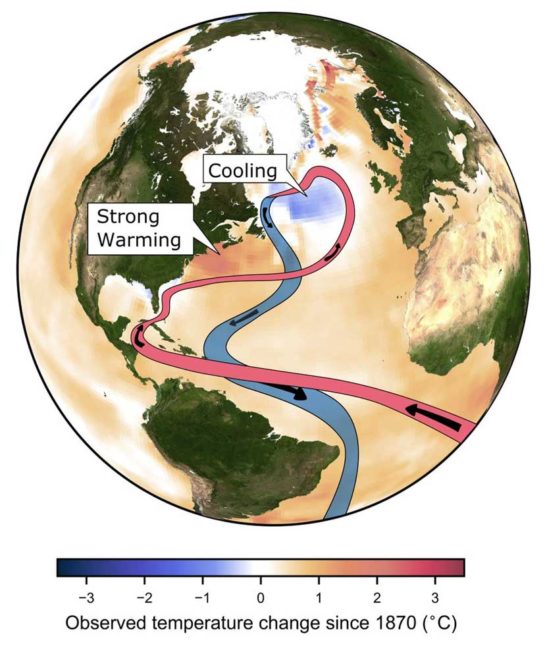 Two new and quite independent studies have been published in Nature with some rather dire news concerning a slowdown of ocean circulation due to climate change.

Both concern the Atlantic meridional overturning circulation (AMOC) that is perhaps better known as a Gulf Stream.

These are not simply obscure papers of interest to a small community of climate scientists, but instead this is big news that concerns all of us and will impact us in a negative way.

The Atlantic meridional overturning circulation (AMOC)—a system of ocean currents in the North Atlantic—has a major impact on climate, yet its evolution during the industrial era is poorly known owing to a lack of direct current measurements. Here we provide evidence for a weakening of the AMOC by about 3 ± 1 sverdrups (around 15 per cent) since the mid-twentieth century.

A 15% drop might not sound like much, but that is a decrease of 3 million cubic meters of water per second. This system transports heat and so a change in this will impact climate and also fishery patterns.

The circulation is also critical for fisheries off the U.S. Atlantic coast, a key part of New England’s economy that have seen changes in recent years, with the cod fishery collapsing as lobster populations have boomed off the Maine coast.

… “A lot of these changes are happening relatively fast, and our fisheries management is unable to keep up,” Saba said. “We’re trying to figure out how to deal with some of these species shifts that we’re seeing.”

It’s not just fisheries: If the slowdown trend continues, it is expected to drive strong sea-level rise against the Eastern Seaboard. Previous research has already shown that from 2009 to 2010, sea level in the region suddenly shot up five inches, thanks in part to a brief slowdown of the circulation.

This occurs, Rahmstorf explains, because the northward flow of the Gulf Stream pushes waters to its right — which means that the ocean piles up against the coast of Europe. But as the current weakens, some of the water flows back toward the United States’ East Coast instead.

As for the future, Rahmstorf predicts the circulation will only weaken further as climate change advances. It may not be slow and steady: There is great fear that there may be a “tipping point” where the circulation comes to an abrupt halt.

The thinking is that the melting of the Greenland ice sheet creates a flow of fresh water into the Northern Atlantic, and that is responsible for this AMOC disruption.

It works like this. Warm water on the surface flows north. It then eventually cools, sinks, and flows south, hence it is a bit like a conveyor belt.

Cold salty water sinks, but because the fresh water flowing off Greenland reduces the degree of saltiness, it disrupts things.

A few additional words from the lead author of the study

This is “something that climate models have predicted for a long time, but we weren’t sure it was really happening. I think it is happening,” said one of the study’s authors, Stefan Rahmstorf of the Potsdam Institute for Climate Impact Research in Germany. “And I think it’s bad news.”

“I think in the long run … Greenland will start melting even faster, so I think the long-term prospect for that ocean circulation system is that it will weaken further,” Rahmstorf said. “And I think that’s going to affect all of us, basically, in a negative way.”

The idea here is that the stronger a current is, the greater its ability to carry thicker grains of sand. So by examining sediment samples from the deep ocean, they can look back and infer how strong the current has been over a long period of time.

Entitled “Anomalously weak Labrador Sea convection and Atlantic overturning during the past 150 years“, they conclude this …

Here we provide several lines of palaeo-oceanographic evidence that Labrador Sea deep convection and the AMOC have been anomalously weak over the past 150 years or so (since the end of the Little Ice Age, LIA, approximately AD 1850) compared with the preceding 1,500 years. Our palaeoclimate reconstructions indicate that the transition occurred either as a predominantly abrupt shift towards the end of the LIA, or as a more gradual, continued decline over the past 150 years; this ambiguity probably arises from non-AMOC influences on the various proxies or from the different sensitivities of these proxies to individual components of the AMOC. We suggest that enhanced freshwater fluxes from the Arctic and Nordic seas towards the end of the LIA—sourced from melting glaciers and thickened sea ice that developed earlier in the LIA—weakened Labrador Sea convection and the AMOC. The lack of a subsequent recovery may have resulted from hysteresis or from twentieth-century melting of the Greenland Ice Sheet

One of authors of this study comments as follows …

“The last 100 years has been its lowest point for the last few thousand years,” said Jon Robson, a researcher at the University of Reading and one of the study’s authors. (The study’s lead author was David Thornalley of the University College London.)

There is a difference

The second paper suggests that the slowdown started in 1850 for natural reasons. Both papers do however confirm that the AMOC has further weakened as human induced Climate Change has kicked into action.

In other words, the initial drop was probably natural, but climate change has now amplified it.

Two papers using completely different approaches have been published in Nature. They contain evidence that verifies that the ocean circulation is weaker than it has ever been during the past 1,500 years.