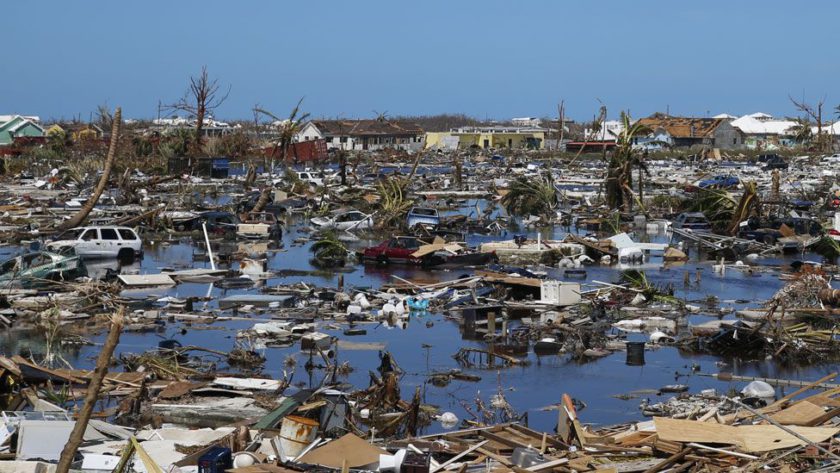 Dorian has been one of the strongest, and also longest-lasting hurricanes on Record in the Atlantic.

It was slow-moving and that was itself devastating. It was also the most powerful storm to hit the Bahamas since records began. Sustained wind speeds of 185mph, storm surges, and flooding has resulted in an unprecedented scale of destruction.

Nobody knows yet how many died. The official count is 50, but numbers are expected to be much higher as hundreds of people are still missing.

“What has happened in the Bahamas is like nothing I have ever seen in my career, and I have been doing this for more than 30 years,” said Rob Young, a professor of geosciences and natural resources and director of the Western Carolina University Program for the Study of Developed Shorelines.

Stephen P. Leatherman, a professor in the Florida International University Department of Earth and Environment, and an expert on hurricanes, likened the destruction to a bombing. “The sheer devastation in the northern Bahamas is pretty much unprecedented,” he said.

Was Dorian caused by climate change?

We can’t say that, but there are a few things that we can say.

Symptoms of a Warming Planet

In Nov 2018 US Fourth National Climate Assessment was published.  A total of 300 government and independent scientists contributed. This repost was rigorously peer-reviewed, and leans upon the peer-reviewed scientific literature. It contains these insights …

A Hurricane, which is also called a Tropical Cyclone or Typhoon in other geographic locations, is basically a rotating storm system. The hub contains a low pressure system at the centre, and the spirals are a collection of thunderstorms that dump rather a lot of rain. Because it is rapidly rotating, the wind speeds it generates can be extremely destructive.

The energy source that drives this is the evaporation of water over warm bodies of ocean. The water vapour rises, then condenses and falls again. Due to the conservation of angular momentum imparted by the Earth’s rotation the entire mass rotates. The vast areas of warm ocean are the fuel that drives these weather engines.

There are many different aspects to it all.

Sea level is rising, and that is a measurable fact. The net impact from this is that storm surges will be far worse.

The observation that sea level is not only rising, but rising at an accelerated rate due to climate change, will inevitably result in an even greater impact from such storms in the decades to come.

Remember that the primary energy source for these weather systems is warm oceans. If you pump more energy into the oceans and warm them up even further, then the rather obvious and quite measurable result is that you will increase the strength of the Hurricanes that they generate. This is not an opinion, it is basic physics. The Hurricane wind speed will increase by roughly eight meters per second for each degree Celsius of warming. The strongest storms are getting stronger and that trend will continue as the pace of warming continues.

Additionally, a stronger storm will in turn also lead to a bigger storm surge and so we also end up with even more costal flooding.

The warmer the atmosphere is, the greater is its ability to transport more moisture and then drop it on us. This also is very basic Physics and is measurable. The Clausius-Clapeyron equation enables us to understand that each degree of Celsius will lead to roughly seven percent more moisture.

Beyond the above we also have the observation that there are other factors also in play. For example, the storms are moving a lot more slowly. The current climate models predict exactly this for human caused climate change. It is a consequence of an expansion of the sub-tropical region of high-pressure and also a far northward-shifted jet stream

Via Inside Climate News … 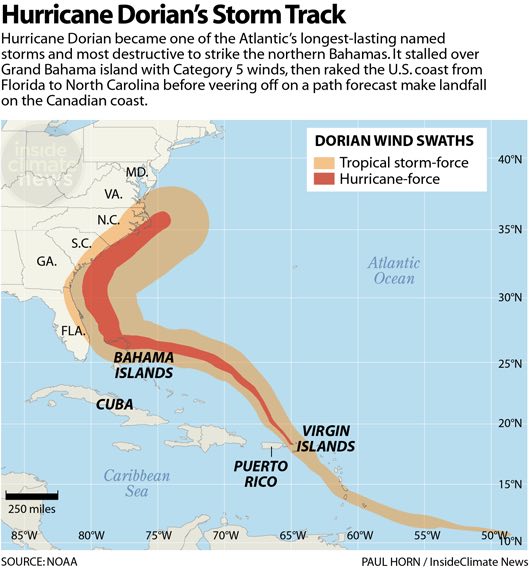 Dorian was also among the longest-lasting named storms, Klotzbach said.

As of Friday evening, it had been a named storm for more than 13 days, nine of them as a hurricane.

“It’s quite unusual for a hurricane to remain a hurricane for as many days as Dorian has,” said climate scientist Michael Mann, a professor and director of the Earth System Science Center at Pennsylvania State University.

Mann said that can be attributed in part to a very warm Atlantic Ocean, and also to the path the storm took, which he described as a matter of chance. The result, he said, is that Dorian remained a “threat to human lives for days on end.”