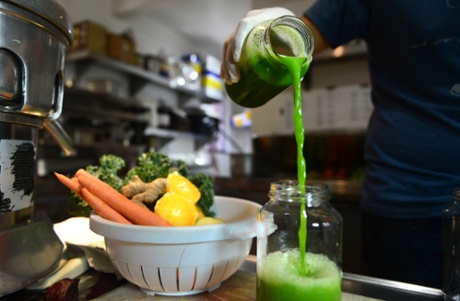 There is a really really good article over on the UK’s Guardian by Dara Mohammadi. For background, he is a Health and Science writer at the Guardian, also presents the Lancet’s news podcast, and is a senior assistant editor at the Lancet.

“Detox” is one of those extra special words that if encountered should trigger your skeptic alarm, and is almost on par with Mr Chopra deploying the word quantum. It sounds impressive, and can indeed befuddle many – “Hey look at all those evil E numbers in the food you eat, you need to detox your body by buying our special detox diet” – or similar.

The quick short summary is this, the very concept of detox is nonsense and has no scientific basis at all. Well, OK, that is not quite correct, so let me extract a quote from the article that helps to clarify that point, because it all boils down to how we utilise the word …

“Let’s be clear,” says Edzard Ernst, emeritus professor of complementary medicine at Exeter University, “there are two types of detox: one is respectable and the other isn’t.” The respectable one, he says, is the medical treatment of people with life-threatening drug addictions. “The other is the word being hijacked by entrepreneurs, quacks and charlatans to sell a bogus treatment that allegedly detoxifies your body of toxins you’re supposed to have accumulated.”

Yes, quoting a professor of “Complementary” medicine might also set your skeptic alarms ringing, especially one who is not just a doctor but also received training in acupuncture, autogenic training, herbalism, homoeopathy, massage therapy and spinal manipulation, but be assured, he really is one of the good guys and is seen as “the scourge of alternative medicine” for publishing critical research that exposes methods that lack documentation of efficacy.

Having been formally trained in it all, and then spent much of his career performing clinical studies, he knows what really does and does not work and so he now exposes it when it is shown not to work, and recognises that most of it does not. He also has what is perhaps the ultimate form of skeptic credential, Prince Charles hates him, and that is perhaps because he tells the press that Prince Charles is just a “snake-oil salesman” … yes really. Also of note is that he is the co-author along with Simon Singh, of the fabulous book “Trick or Treatment?: Alternative Medicine on Trial“, a book that is not just the ultimate verdict on alternative medicine, but explains and exposes it all in a manner that is fearless, intelligent, remorselessly rational, and evidence based.

So back to the detox article

… there’s something you should know: detoxing – the idea that you can flush your system of impurities and leave your organs squeaky clean and raring to go – is a scam. It’s a pseudo-medical concept designed to sell you things

…“The healthy body has kidneys, a liver, skin, even lungs that are detoxifying as we speak,” he says. “There is no known way – certainly not through detox treatments – to make something that works perfectly well in a healthy body work better.”

… Much of the sales patter revolves around “toxins”: poisonous substances that you ingest or inhale. But it’s not clear exactly what these toxins are. If they were named they could be measured before and after treatment to test effectiveness. Yet, much like floaters in your eye, try to focus on these toxins and they scamper from view

… When the scientists asked for evidence behind the claims, not one of the manufacturers could define what they meant by detoxification, let alone name the toxins.

So please, go read the full article, it really is worth a read.

“It’s a scandal,” fumes Ernst. “It’s criminal exploitation of the gullible man on the street and it sort of keys into something that we all would love to have – a simple remedy that frees us of our sins, so to speak. It’s nice to think that it could exist but unfortunately it doesn’t.”

First comment after the article is some guy promoting milk thistle tablets as a hangover cure, and is then promptly followed by a lot of other readers who proceed to rip his claim apart and suggest that he might like to actually go read the article.