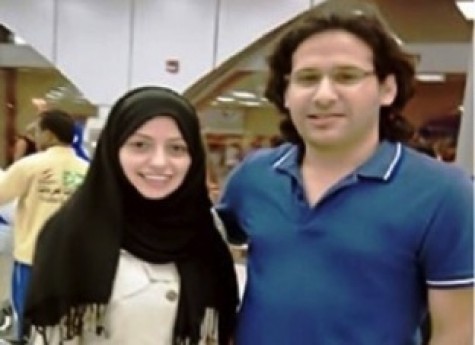 Not too long ago I blogged about the utterly absurd case of Raif Badawi, who was sentenced to 10 years in jail and 1,000 lashes for the (from the viewpoint of the Saudi authorities) hideous crime of starting a progressive website.

The latest update is that things are getting even worse, you would not think it possible, but alas the Saudi authorities truly do exceed at being complete and utter turds.

We already know that Raif’s lawyer, Waleed Abu Al-Khair, has been imprisoned. He was listed by Forbes magazine as one of Top 100 Most Influential Arabs on Twitter, and on July 6, 2014, Abulkhair was sentenced to 15 years in prison by the Specialized Criminal Court for the crime of simply criticising the ongoing human rights abuses in Saudi Arabia. Putting a peaceful activist behind bars for at least a decade over his social media comments and statements to news media was at that time a new low.

Can they sink any lower?

The sister of Raif Badawi and also the wife of Waleed Abu Al-Khair, Samar Badawi, is a human rights activist who went to Geneva and stood before the United Nations Human Rights Council in September. There she told them about the many human rights violations in Saudi Arabia and proceed to demand the release of both her brother and also his lawyer Abu Al-Khair.

The Saudi response to that is now this ...

On 2 December 2014, Badawi was informed by staff in the Passport Office at King Abdulaziz International Airport that she is not allowed to travel abroad anymore by an order from the Ministry of Interior, without any reason given or any prior investigations.

She was on her way to get a flight to participate in the 16th European Union (EU) NGOs Forum on Human Rights being held on 4 and 5 December in Brussels, Belgium. According to the EU, “The EU-NGO Forum on Human Rights is an annual conference that provides a venue for direct interaction and in depth discussion between representatives of global civil society and the EU institutions, EU Member States and international organisations on various topics related to the promotion and protection of human rights.” The theme of this year’s Forum is “Freedoms of expression on line and offline”.

Reports confirm that the travel ban was ordered by the Ministry of Interior following her speech in September about the human rights situation in Saudi Arabia at the United Nations Human Rights Council in Geneva. Badawi appeared before the Council and called for the release of her husband, prominent human rights lawyer Waleed Abu Al-Khair, who was sentenced to 15 years in prison earlier this year.

Saudi Arabia is not a friend to anybody

Apparently Saudi Arabia is a “friend”, but be under no illusions, they are in reality an enemy to humanity and an enemy of basic human rights. We now live in a world that is awash with violence and intolerance all inspired by an extreme form of Islam whose propagation has been funded by Saudi oil revenues.

There is a great article in the Washington Post that dives under the covers and explains it ...

With the advent of the oil bonanza — as the French scholar, Giles Kepel writes, Saudi goals were to “reach out and spread Wahhabism across the Muslim world … to “Wahhabise” Islam, thereby reducing the “multitude of voices within the religion” to a “single creed” — a movement which would transcend national divisions. Billions of dollars were — and continue to be — invested in this manifestation of soft power.

It was this heady mix of billion dollar soft power projection — and the Saudi willingness to manage Sunni Islam both to further America’s interests, as it concomitantly embedded Wahhabism educationally, socially and culturally throughout the lands of Islam.

The seeds of the intolerant and violence we see being manifested today has its roots in this transplantation of Wahhabism, and so it is time to call a spade a spade and recognise that Saudi Arabia is no friend to anybody, not even its own citizens.