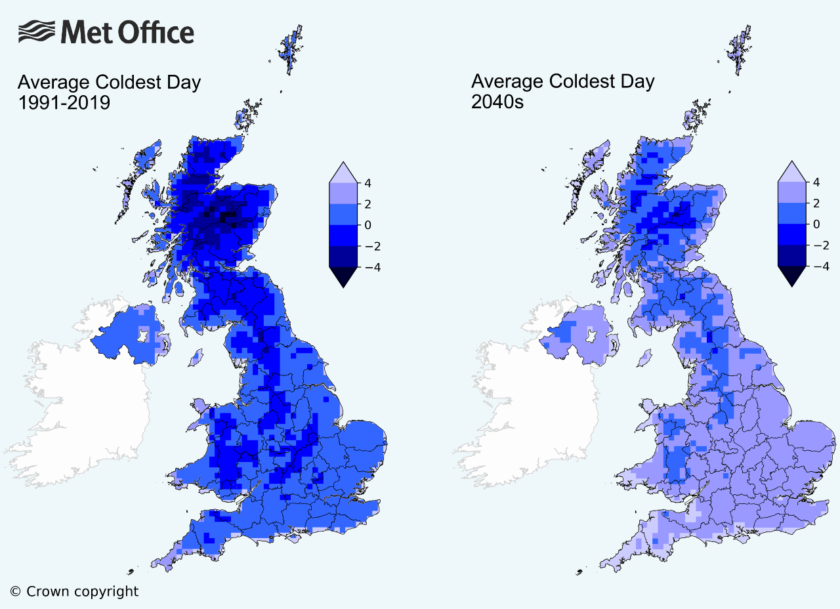 Currently the BBC is running a program titled “Panorama: Britain’s Wild Weather“. They have been talking about the dramatic change that climate change will bring to the UK. Their data source is the UK’s Met office.

To illustrate what the not too distance future will be like, here is a map …

What does that actually mean?

The quick translation is this.

Scenery such as this …

… will become a historical memory and not a current reality.

The BBC are of course good at promoting themselves, and so they have an article up on their website about all of this. You can find that here – Climate change: Snowy UK winters could become thing of the past

I’ve cherry picked a great quote from that …

…It could mean the end of sledging, snowmen and snowball fights, says Dr Lizzie Kendon, a senior Met Office scientist who worked on the climate projections.

“We’re saying by the end of the century much of the lying snow will have disappeared entirely except over the highest ground,” she told Panorama.

If the world reduces emissions significantly the changes will be less dramatic, the Met Office says….

To distill it all down the essence of it all is this; warmer, dryer, wetter. The combination of those last two sounds weird. It basically means hotter dryer summers, then sudden downpours.

That combination will mean flooding.

Hotter means that west London, which experienced a high of 32C in 2000, will be experiencing a high of 40C by 2070. That is an astonishing change for one person to see in one human lifetime.

What does this mean for you locally in the UK?

The Met Office, in conjunction with the BBC, enable you to key in your postcode and see what all of this actually means on a very localised scale – What will climate change look like near me?

Is this projection inevitable?

Actually no, it is not. This is simply a projection of the worst case scenario, or to put that another way, the “do nothing” option.

There are plans in play.

The new goal is to cut the UK’s greenhouse gas emission by 68% by the end of the decade, based on 1990 levels. The official press release for that announcement can be found here.

It is basically a ten point plan that is as follows …

What is driving that is the UK hosting a virtual Climate Ambition Summit on 12 December. That summit will coincide with the fifth anniversary of the historic Paris Agreement.

Details of that summit can be found here.

Bottom Line: Climate Change is perhaps the greatest threat our species has ever faced. We must take decisive meaningful steps because doing nothing is really not an option.