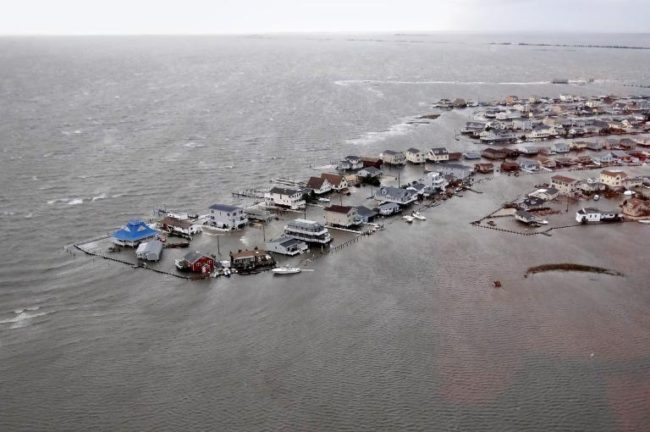 We often read stories about the ice in the Arctic, Antarctic, and Greenland melting, but how can we know if this is really true, can we ever be sure? One rather robust and quite irrefutable bit of evidence would be sea level. If indeed there was an on-going trend of a warming Arctic then there should also be an on-going trend of a rising sea level. Rather obviously you can’t have one without the other.

In short, yes there is.

I should perhaps also add another obvious observation. The melting of the ice sitting on the Arctic ocean is irrelevant because that is ice that is floating, hence melting it will not directly contribute to a rise in sea level. It is the ice in Greenland and also the Antarctic that we should truly worry about because together they contain enough frozen water to rase sea level by roughly 66 meters.

OK, so the point is this. Calculating sea level rise is not all that easy, and instead is very complicated. It is not akin to simply filling a bathtub and then measuring a universal water level. Instead, it has rather a lot of other aspects that do need to be taken into account.

For example, if a tidal gauge sits in a seismic region then the land itself will have moved up or down and that will distort any historical measurements, so you need to handle data from tidal gauges in seismically active regions in an appropriate manner.

We also do not live on disk-world. As is highlighted within the paper …

“Sea level change due to the melting of ice on land is not spatially uniform, because the Earth is a self-gravitating, viscoelastically compressible, rotating planet, as a result, when an ice mass melts, sea level falls nearest the ice and rises faster than the global mean rate in the far field”

To address all this the paper utilised a newer better model that reflects this reality and concluded that sea level rise during the 20th century was probably about 5% to 28% higher than previous models indicated.

Side note: it is not just down to tidal gauges anymore, satellite observations are the tool of choice today.

As Climate change kicks in and the warming trend accelerates, we should also observe an acceleration in sea level rising.

We do, this is exactly what is being observed. The current rate is now roughly 1.2 inches per decade.

It’s not just the Ice Melting

I did warn you that it is complicated.

It would be way too simplistic to simply suggest that this is all ice melting. We also need to take account of what is known as thermal expansion. In simple terms, if you heat sea water, then the additional kinetic energy of the water molecules increases. The molecules move more and so they maintain a greater average separation. In other words, warm the ocean up and the water in it will expand.

Roughly about 50% of the current sea level rise can be attributed to thermal expansion.

The “So what” is that it is going to keep rising decade after decade after decade. Knowing this matters because about 39% of the US population (that is 123.3 million people) live in relatively high-population-density coastal areas, where sea level plays a role in flooding, shoreline erosion, and hazards from storms.

If you would like to see what will happen with just a couple of feet, then check out the NOAA Sea Level Rise viewer (Don’t get too excited, it is US only)

Here is how things have played out since 1993. This first chart illustrates a record of what has been happening via satellite sea level measurements … 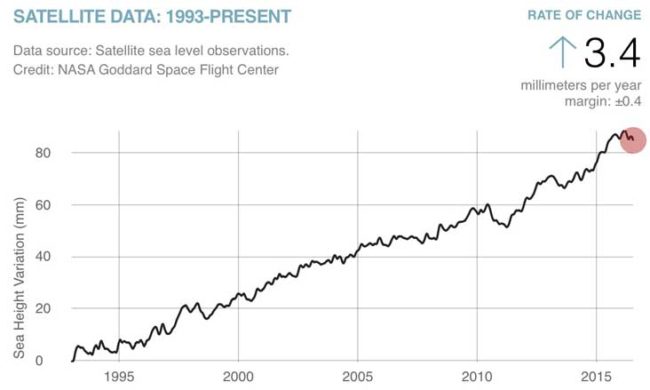 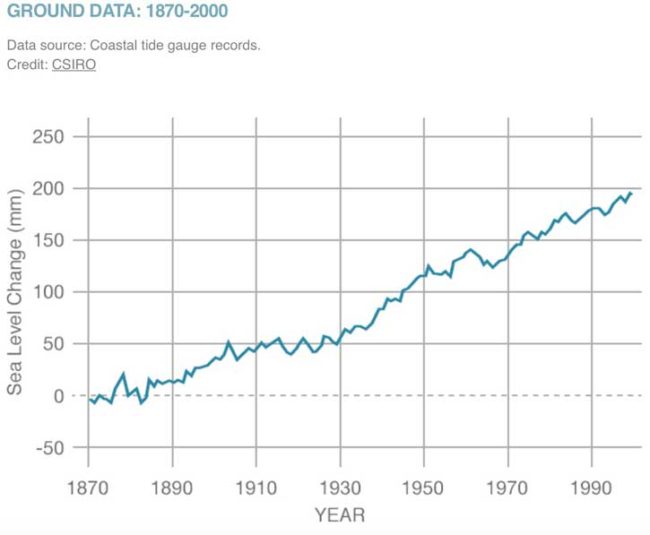 As previously articulated, the prevailing consensus is that during most of the 20th century the rate of increase has been roughly 1.6mm per year, and that during the past couple of decades the rate ate which sea level has been rising has accelerated to about 3.2mm per year.

I’ve mentioned this twice now because it is a rather important observation. We do not have a flat predictable curve, the arc is bending upwards – it is accelerating.

There are of course regional variations.

If you want to understand the future, then you start by looking back to see what has happened, and why it has been happening. This yields insights into what comes next and when.

Our ancestors were naturally selected because of their pattern seeking abilities, it gave them a distinct survival advantage. They could see seasonal variations, and while they might have perhaps deployed mythology and superstition to explain such patterns, the very fact that they grasped the existence of such patterns enabled them to prepare for winter and so survive.

Today we can see climate change patterns and trends. Facing us is a choice of leveraging that information to take meaningful steps to avoid a catastrophic future or to simply sit back and do nothing. If you care about the future then doing nothing is not really a viable option, and so like our ancestors did, we also can potentially leverage such patterns.