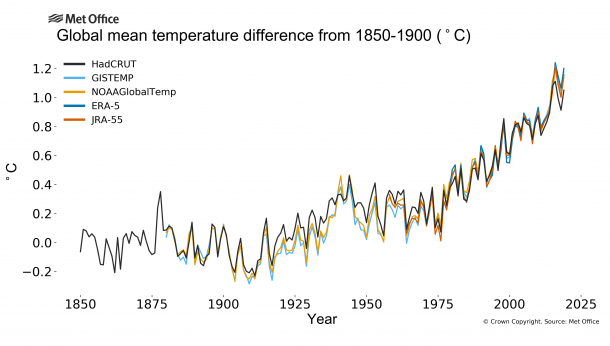 The official 2019 Global Climate data is now available. What it tells us is not a surprise. If it concluded that 2019 was just an average year, nothing special, then that would have been a bombshell.

Key update: 2019 was the second warmest year on record.

This is the conclusion of not one source, but multiple independent sources.

The year 2019 was the second warmest year on record after 2016. This is via the World Meteorological Organization’s consolidated analysis of leading international datasets.

Average temperatures for the five-year (2015-2019) and ten-year (2010-2019) periods were the highest on record. Since the 1980s each decade has been warmer than the previous one. This trend is expected to continue because of record levels of heat-trapping greenhouse gases in the atmosphere.

Averaged across the five data sets used in the consolidated analysis, the annual global temperature in 2019 was 1.1°C warmer than the average for 1850-1900, used to represent pre-industrial conditions. 2016 remains the warmest year on record. This is because of the combination of a very strong El Niño event, which has a warming impact, and long-term climate change.

\“The average global temperature has risen by about 1.1°C since the pre-industrial era and ocean heat content is at a record level, On the current path of carbon dioxide emissions, we are heading towards a temperature increase of 3 to 5 degrees Celsius by the end of century.”

“The year 2020 has started out where 2019 left off – with high-impact weather and climate-related events.  Australia had its hottest, driest year on record in 2019, setting the scene for the massive bushfires which were so devastating to people and property, wildlife, ecosystems and the environment,”

“Unfortunately, we expect to see much extreme weather throughout 2020 and the coming decades, fuelled by record levels of heat-trapping greenhouse gases in the atmosphere,”

More than 90 percent of the excess heat is stored within the world’s ocean, and so ocean heat content is a good way to quantify the rate of global warming. A new study published 13 January in Advances in Atmospheric Sciences with data from the National Oceanic and Atmospheric Administration/National Center for Environmental Information and the Institute of Atmospheric Physics showed that ocean heat content was at a record level in 2019. The past five years are the top five warmest years in the ocean historically with modern instruments, and the past ten years are also the top ten years on record.

According to independent analyses by NASA and the National Oceanic and Atmospheric Administration (NOAA), Earth’s global surface temperatures in 2019 were the second warmest since modern recordkeeping began in 1880.

“The decade that just ended is clearly the warmest decade on record,” said GISS Director Gavin Schmidt. “Every decade since the 1960s clearly has been warmer than the one before.”

“We crossed over into more than 2 degrees Fahrenheit warming territory in 2015 and we are unlikely to go back. This shows that what’s happening is persistent, not a fluke due to some weather phenomenon: we know that the long-term trends are being driven by the increasing levels of greenhouse gases in the atmosphere,”

These in situ measurements are analyzed using an algorithm that considers the varied spacing of temperature stations around the globe and urban heat island effects that could skew the conclusions. These calculations produce the global average temperature deviations from the baseline period of 1951 to 1980.

NOAA scientists used much of the same raw temperature data, but with a different interpolation into the Earth’s polar and other data-poor regions. NOAA’s analysis found 2019 global temperatures were 1.7 degrees Fahrenheit (0.95 degrees Celsius) above the 20th century average.

NASA’s full 2019 surface temperature data set and the complete methodology used for the temperature calculation and its uncertainties are available at: https://data.giss.nasa.gov/gistemp

Temperatures averaged over the calendar year 2019 were:

The annual global temperature figures for 2019 confirm that the past decade was the warmest on record.

The data also show that the past five years were the warmest in the 170-year series.

The balance of evidence using multiple data sets suggests that 2019, a year without a strong classical El Niño, is the second warmest year for annual global temperatures in records that begin in 1850. Only 2016 has been warmer, a year when temperature was boosted by a significant El Niño.

“Our collective global temperature figures agree that 2019 joins the other years from 2015 as the five warmest years on record.

“Each decade from the 1980s has been successively warmer than all the decades that came before. 2019 concludes the warmest ‘cardinal’ decade (those spanning years ending 0-9) in records that stretch back to the mid-19th century.”

“While we expect global mean temperatures to continue to rise in general, we don’t expect to see year-on-year increases because of the influence of natural variability in the climate system.”

“While we know that human activities are causing the globe to warm, it is important to measure this warming as accurately as possible. We are confident that the world has warmed by about 1.0 °C since the late nineteenth century because different methods of working out the global temperature give very similar results.”

The main contributor to warming over the last 170 years is human influence on climate from increasing greenhouse gases in the atmosphere. The effects of human-induced climate change are not limited to surface temperature. Warming of the climate system is seen across a range of climate indicators that build a holistic picture of change outside of our expectations from natural variability across the land, atmosphere, oceans and ice.

A more complete NOAA summary of climate conditions and events can be found at: http://www.ncdc.noaa.gov/sotc/global/2019/13