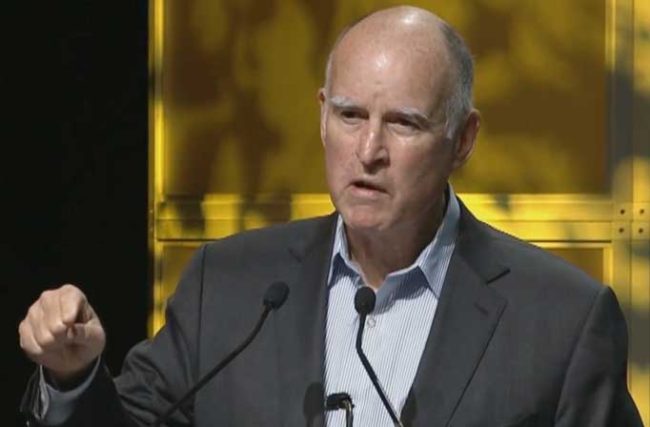 The Trump administration will need to come to terms with the fact that many will not be simply rolling over to accommodate scientific illiteracy. Gov. Brown of California has now made his stance abundantly clear.

We have already observed the start of a witch hunt with a request for the names of specific individuals who have worked on climate change. The Energy Department which received that request quite rightly responded by saying it would not comply.

The Trump disconnect from reality is quite frankly astonishing. We have even seen last Wednesday Anthony Scaramucci, a member of the president-elect’s presidential transition team executive committee suggesting that modern climate science is equivalent to the ancient belief that the Earth was flat. That is perhaps rather ironic given the observation that even the president of flat earth society (which has believers all around the globe) accepts the evidence that fossil fuel usage is contributing to global warming. When your anti-science stance is so disconnected from reality that even the flat earth society president thinks you are nuts, then you can be damn sure that you are indeed pushing the boundaries.

Gov. Jerry Brown at the AGU

The AGU (American Geophysical Union) has been holding its annual meeting in San Francisco (12-16 Dec). This is the largest Earth and space science meeting in the world, and as part of that Gov. Jerry Brown was scheduled as a keynote speaker last Wednesday.

Here is a short extract from that speech where he took the bold stance that is now widely being reported. This is his most heated rhetoric yet and he is clearly drawing a line in the sand …

The Sacramento Bee covers it all in detail …

…“We’ve got the scientists, we’ve got the lawyers and we’re ready to fight. We’re ready to defend,” he said to boisterous applause at the American Geophysical Union conference in San Francisco.

… “And, if Trump turns off the satellites, California will launch its own damn satellite,” he added. “We’re going to collect that data.”

He said if the federal government “starts messing with” the state’s renowned science facilities, such as Lawrence Livermore National Laboratory, “I am the president of the Board of Regents. I am going to say, ‘Keep your hands off. That laboratory is going to pursue good science.’ ”

… He reiterated that the threat is “far more” than one or two politicians – “we’re facing Big Oil. We’re facing big financial structures that are at odds with the survivability of our world.” He petitioned the assembled scientists, whom he called “truth seekers,” to join with attorneys to help California lead the charge.

… “A lot of people say, ‘What the hell are you doing, Brown? You’re not a country,’ ” the governor said, to laughter.

“Well, judged by measures of gross domestic product of over $2.2 trillion, we’re the fifth or sixth economy in the world. And we’ve got a lot of firepower … And we will persevere. Have no doubt about that.”

Others commenting on why Gov. Brown has now cranked up the heat have observed …

Jack Pitney, a politics professor at Claremont McKenna College, suggested it was Trump’s selection of Perry, who is close with the fossil fuel industry and joins a Cabinet largely at odds with Brown over the environment, that spurred Brown’s heightened aggression.

“I think he’s reading the appointment as a rude gesture toward the state of California,” Pitney said, noting Perry’s job-poaching attempts. “If you are Jerry Brown, you see the Trump administration as a gusher of oil, which to him is not a good thing.”

Pitney said that had Trump not picked Perry, along with nominating Exxon Mobil CEO Rex Tillerson for secretary of state, “Brown might be taking a somewhat different tone.

“The appointments so far really put him on the other side of the battlefield on energy and climate change,” Pitney said. “Brown probably looks at these appointments and thinks, it can’t get worse, so we might as well fight back.”

Indeed yes, the Orange King has so far made some rather absurd and quite controversial choices for his administration. Much of it sets the stage for wide scale civil disobedience and non-compliance.

I’ve been quite frankly utterly blown away by some who have supported Trump on the basis that he was … “not as bad a choice as Hillary”. Er … no, seriously no, if this is your stance, then you are quite frankly being incredibly stupid or excessively gullible, and will in time have to come to terms with the reality of the election of an individual who is not simply an incompetent buffoon, but is actively putting in place an anti-science and anti-LGBT rights administration. The grasp that his hand-picked team have of scientific reality is so goddam elusive that not even a scanning tunneling microscope would be able to find it.