The annual Arctic Report card has been published and it spells out some rather dire facts. Global warming in the Arctic region is accelerating and 2016 has been the warmest Arctic year ever recorded.

“temperatures in the region continue to climb at double the rate of the planet as a whole.“

What is the Annual Arctic Report card?

Issued annually since 2006, the Arctic Report Card is a timely and peer-reviewed source for clear, reliable and concise environmental information on the current state of different components of the Arctic environmental system relative to historical records. It is issued every December.

Who is it aimed at?

In other words, if interested in the Arctic and what is happening, then it is for you.

The press conference announcing it each year is held at the American Geophysical Society meeting (which is taking place this week, hence was published last Tuesday), but it is actually an initiative of the National Oceanic and Atmospheric Administration. (NOAA).

What it tells us should not be a surprise, but in short, things are rather dire. The long term warming trend has continued. The sea ice loss is triggering extensive Arctic Changes.

The home page for the 2016 report is here. This is your portal into a flow of highly reliable information that has been written by 61 authors from 11 different countries. The 12 essays it contains were subject to independent peer-review organized by the Arctic Monitoring and Assessment Programme (AMAP) of the Arctic Council, so it’s robustness can be depended upon.

The highlights listed for the 2016 report are as follows:

There is also a short official YouTube clip that introduces it …

The report contains a few graphics that communicate what is happening, and so I’ve picked three.

The excessive warming in the Arctic

Currently, the Arctic is warming at more than twice the rate of lower latitudes … 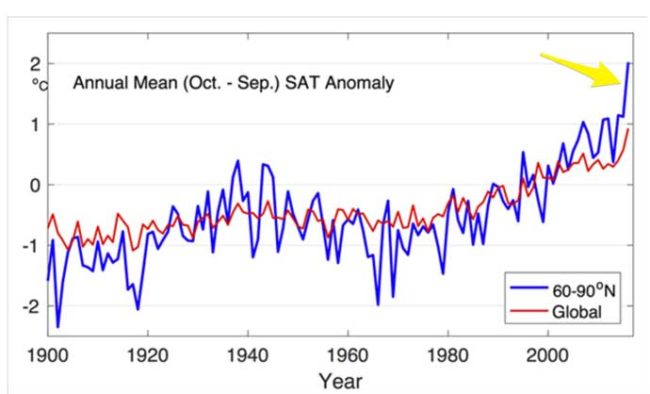 Monthly change in the total mass (in Gigatonnes) of the Greenland ice sheet between April 2002 and April 2016, estimated from GRACE measurements. The red crosses denote the values for the month of April of each year. … 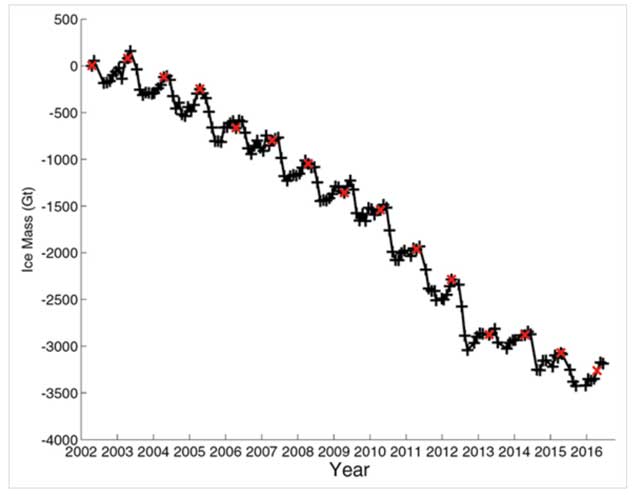 The Decline of Old Sea Ice

There has been a sharp decline in old ice, it is no longer surviving … 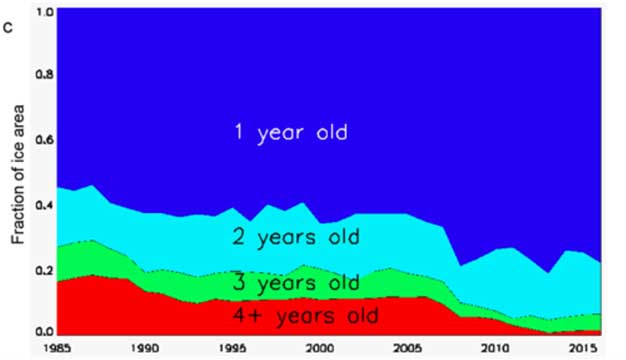 … and yet Trump thinks it is all a Chinese “Hoax” and his friends equate overwhelming evidence like this to be on par with a flat earth belief. That is perhaps rather ironic given the observation that even the president of flat earth society (which has believers all around the globe) accept the evidence that fossil fuel usage is contributing to global warming.

Chris Mooney has a good writeup of the Arctic Report within the Washington Post – The Arctic just had its hottest year on record ‘by far,’ scientists say.