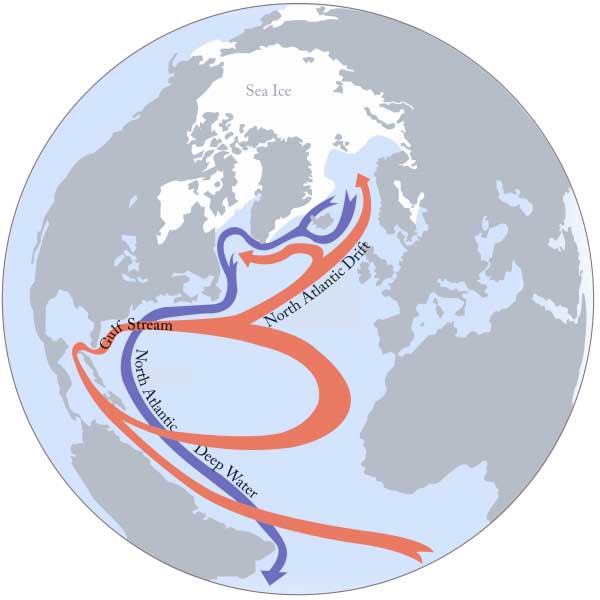 Wei Liu and colleagues from the Scripps Institution of Oceanography in San Diego and the University of Wisconsin-Madison have published a new paper that outlines something that most of the current climate models are not considering when projecting the potential impact of climate change. Ocean currents, or to be a tad more precise, the distinct possibility that ocean currents will be radically altered by climate change.

The paper is entitled “Overlooked possibility of a collapsed Atlantic Meridional Overturning Circulation in warming climate“. It is open source and so the full paper is accessible (no paywall).

It lays out what the paper is all about …

Changes in the Atlantic Meridional Overturning Circulation (AMOC) are moderate in most climate model projections under increasing greenhouse gas forcing. This intermodel consensus may be an artifact of common model biases that favor a stable AMOC. Observationally based freshwater budget analyses suggest that the AMOC is in an unstable regime susceptible for large changes in response to perturbations. By correcting the model biases, we show that the AMOC collapses 300 years after the atmospheric CO2 concentration is abruptly doubled from the 1990 level. Compared to an uncorrected model, the AMOC collapse brings about large, markedly different climate responses: a prominent cooling over the northern North Atlantic and neighboring areas, sea ice increases over the Greenland-Iceland-Norwegian seas and to the south of Greenland, and a significant southward rain-belt migration over the tropical Atlantic. Our results highlight the need to develop dynamical metrics to constrain models and the importance of reducing model biases in long-term climate projection.

The point being raised is wholly valid. The underlying assumption that ocean currents will just carry on behaving more or less as they do today is not a viable assumption.

We know specific things. For example …

What exactly have they come up with?

This can’t have been a sudden realisation, so what is going on here.

If you run current climate models then the projection is that the North Atlantic current, or to use the term they deploy, the AMOC (Atlantic Meridional Overturning Circulation), just weakens a bit and then recovers.

If however you correct the model to take into account to flow from fresh water into the ocean, then in about 300 years you get a complete collapse of the AMOC.

Freshwater continually flows into the northern Atlantic through precipitation, rivers and ice-melting. But supply of salty waters from the south, through the Gulf Stream System, balances this. If however the current slows, there is less salt supply, and the surface ocean gets less salty. This fresher water is lighter than saltier water and therefore cannot sink into the depths so easily. Since this sinking – the so-called deep water formation – drives the Gulf Stream System, the current continues to weaken. There is a critical point when this becomes an unstoppable vicious circle. This is one of the classic tipping points in the climate system.

However, it’s still unclear where exactly this tipping point is. Most models show a significant slowdown in the Gulf Stream System by 20% to 50% in typical global warming scenarios up to the year 2100, but do not exceed the tipping point that would lead to its collapse. However, there is a large spread between different models – which is not surprising since the stability of the Atlantic flow depends on a subtle balance in the salinity and thus also in the freshwater budget, which is only inaccurately known. In addition, there have long been serious indications that the models are not only inaccurate, but perhaps all systematically biased towards an exceedingly stable AMOC

This new study is of direct interest to Stefan, because the starting point for this new study was Stefan’s paper on the topic in 1996.

This new study is certainly not the last word on this important question. Compared to the measured data the correction appears to be somewhat too strong – the adjusted model version might therefore be too unstable. As computing time is scarce and expensive, the CO2 concentration in the experiments was abruptly doubled, rather than gradually ramped up in a more realistic emission scenario. The experiment was carried out with only one climate model;

Now don’t misunderstand that wholly valid criticism. This new study is a good step forward, but it is only one of many more steps that will still need to be taken. Stefan digs into a lot more detail, so reading what he has to say about it all is, if the topic is of interest, highly recommended.

Key points to note from all of this are as follows …

Either leads to a stronger weakening of the Gulf Stream, but what happens when you consider both of the above together within the models?

To answer that we need more research.