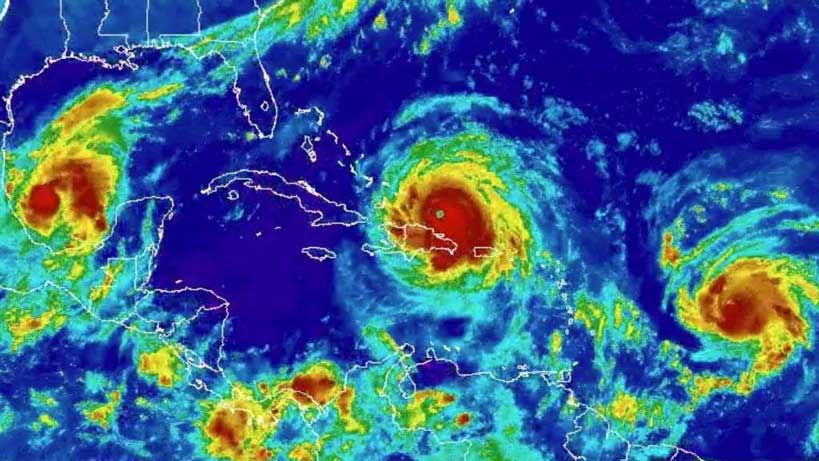 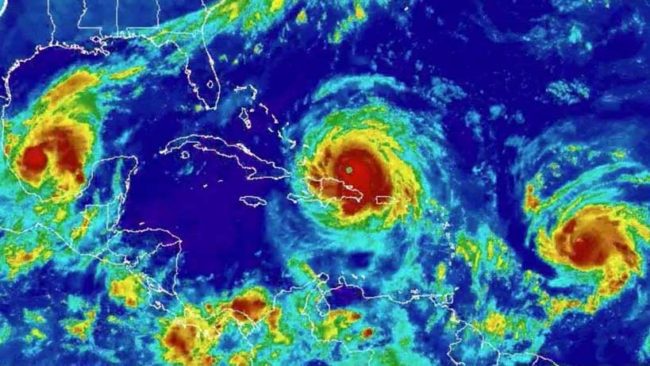 The observation that we are seeing Hurricanes that are unprecedented and also of a size never seen before in the West Atlantic will quite naturally inspire many to wonder if there is a Climate Change connection. There is. This is because Climate Change does indeed directly increase Hurricane intensity.

As I write this, we have three hurricanes in the West Atlantic. This is something we have never seen before, and that has not gone unnoticed …

3 hurricanes threatening land simultaneously in the W Atlantic Basin. Never seen anything like this in the modern record #Irma #Jose #Katia pic.twitter.com/fSHHKxxmzk

The emergence of these three in a short span of time after the record breaking #Harvey Hurricane that was itself quite literally unprecedented is truly astonishing to many.

Are your really Surprised?

If you had been listening to Al Gore then all this will have been confirmation that what he has been saying is correct. He is not a prophet with magical powers, nor does he have some special insight, but instead he simply listened to what the subject matter experts have been saying for quite some time.

There is a Newsweek article that highlights this …

CLIMATE CHANGE MADE HURRICANE IRMA WORSE: AL GORE WARNED THIS WOULD HAPPEN BUT PEOPLE DIDN’T LISTEN TO HIS ‘INCONVENIENT TRUTH’

… The back-to-back disasters may not be directly caused by climate change, but the intensification of global warming certainly played a factor, scientists say. Rising temperatures on the earth’s surface and sea can “badly exacerbate” the impact of a storm, climate scientist Anders Levermann told Bloomberg earlier this week. That echoes research by MIT meteorology expert Kerry Emanuel, who in March said that “climate change potentially affects the frequency, intensity and tracks of tropical cyclones.”

In spite of science, climate deniers and skeptics, like President Trump, who pulled the U.S. out of the Paris Agreement on climate change earlier in 2017, continue to dismiss the effects of human activities affecting our environment. But Irma and company are just the beginning. By the end of the 21st century, according to the Geophysical Fluid Dynamics Laboratory, hurricanes will be a lot more powerful and dangerous due to rising temperatures of seawater.

Someone tried to warn us—even as little as a month ago.

Al Gore’s Inconvenient films, packaged as major motion pictures with all the polished sheen and expensive marketing one expects from a superhero movie, are not just slick popcorn films. They’re packaged that way to make them more palatable to the average Joe. So if you missed the former vice president’s movie when it hit theaters last month, now is the time to see it.

So what exactly is the connection between Hurricane intensity and climate change?

Let’s take a look by first starting with a quick review of what drives a Hurricane and then go from there.

A Hurricane, which is also called a Tropical Cyclone or Typhoon in other geographic locations, is basically a rotating storm system. The hub contains a low pressure system at the centre, and the spirals are a collection of thunderstorms that dump rather a lot of rain. Because it is rapidly rotating then the wind speeds it generates can be extremely destructive.

The energy source that drives this is the evaporation of water over warm bodies of ocean. The water vapour rises, then condenses and falls again. Due to the conservation of angular momentum imparted by the Earth’s rotation the entire mass rotates. Because it is the vast areas of warm ocean that are essentially the fuel that drives these weather engines then whenever it all crosses over land it will lose access to the energy source and become weaker.

There are various different aspects to it all, however some of the most well-understood are as follows.

Sea level is rising, and that is a measurable fact. The Eastern US has a recorded increase of a one foot compared to historical records, and so if nothing else came into play then that alone will inevitably result in a greater impact when such storms hit land. When Sandy hit New York sea level rise did play a role in the flooding that happened.

The observation that sea level is not only rising, but rising at an accelerated rate due to climate change, will inevitably result in an even greater impact from such storms in the decades to come.

Warmer Oceans
Remember that the primary energy source for these weather systems is warm oceans. If you pump more energy into the oceans and warm them up even further, then the rather obvious and quite measurable result is that you will increase the strength of the Hurricanes that they generate. This is not an option, it’s a fact. The Hurricane wind speed will increase by roughly eight meters per second for each degree Celsius of warming. The strongest storms are getting stronger and that trend will continue as the pace of warming continues.

Additionally, a stronger storm will in turn also lead to a bigger storm surge and so we also end up with even more costal flooding.

Warmer Atmosphere
The warmer the atmosphere is the greater is its ability to transport more moisture and then drop it on us. This also is very basic Physics and is measurable. The Clausius-Clapeyron equation enables us to understand that each degree of Celsius will lead to roughly seven percent more moisture.

Other factors
Beyond the above we also have the observation that there are other factors also in play. For example, the storms are moving a lot more slowly. The current climate models predict exactly this for human caused climate change – an expansion of the sub-tropical region of high-pressure and also a far northward-shifted jet stream

Climate Change is having a direct measurable impact. This is not a new insight, but instead has been appreciated for some time now, so much so, that Al Gore and others, who were paying attention to the subject matter experts have been vocally and persistently telling us this.

Unless we pay attention and take bold decisive action to address the very real problem we face, then the ongoing trend will not only continue but will get a lot worse in the decades to come.

NOAA hurricane hunters flew through the eye of Hurricane Irma on Sept. 5, capturing the storm’s massive eye wall on camera …