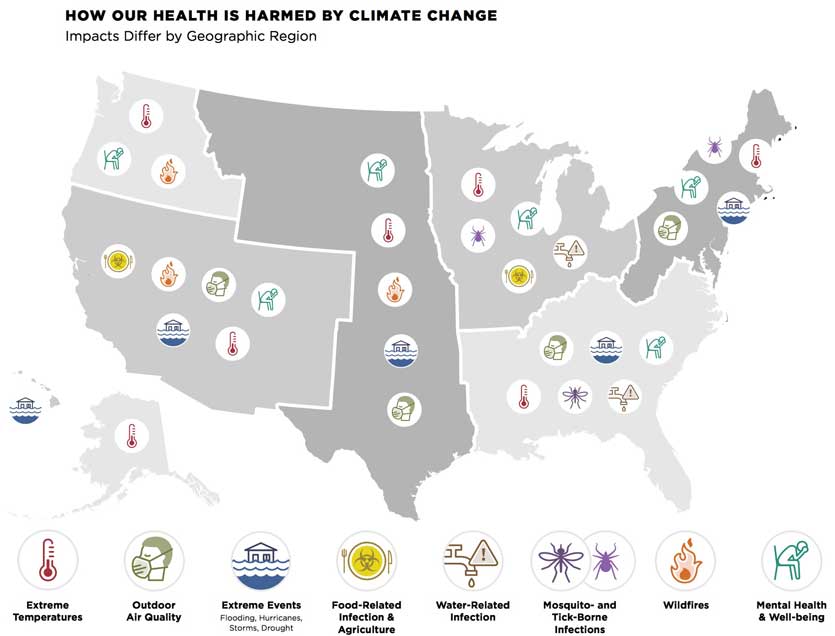 The Medical Society Consortium has published a report that lays out the impact that Climate Change is already having on human health.

They have an about page. There they explain …

The mission of the Consortium is to inform the public and policymakers about the harmful health effects of climate change on Americans, as well as about the immediate and long-term health benefits associated with decreasing greenhouse gas emissions (i.e., heat-trapping pollution)  and other preventive and protective measures.

They also have a list of member societies that is quite extensive.

The background context here is that they conducted a survey of physicians and found that the majority of survey respondents reported that they were already seeing health harms from climate change among their own patients. To be specific, increased cardiorespiratory disease (related to air quality and heat), more severe and longer lasting allergy symptoms, and injuries attributed to extreme weather.

This is not a report written by climate scientists, but rather has been written by doctors.

Global or US centric?

It is not global, but rather is very specific to the US, which is perhaps understandable because it is a consortium of US Health Care associations. That however does not in any way render it irrelevant to others outside the US. This is because the trends that they are observing will be equally applicable elsewhere, so it is still of general interest.

What does the report tell us? 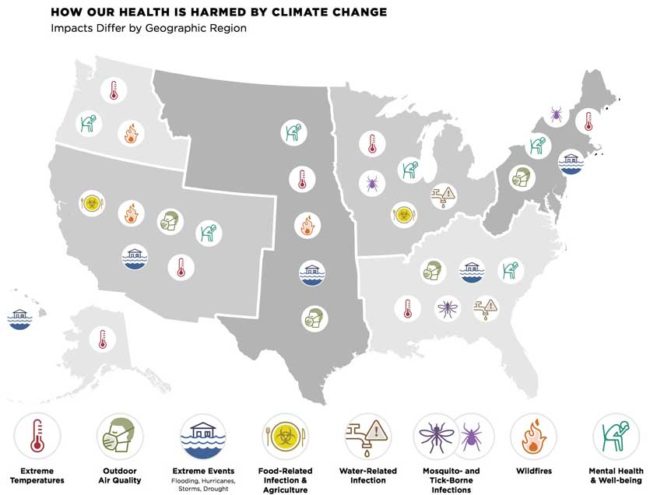 The report then goes on to discuss each of the distinctly different impacts and uses a specific case study to illustrate each of them.

Poor air quality increases asthma and allergy attacks, and can lead to other illnesses, hospitalizations, and deaths. For example, warmer and drier conditions lead to an increase in wild fires. Fire smoke, which can travel hundreds of miles downwind, exposes people to harmful pollutants and increases emergency room visits, hospitalizations, and treatments for asthma, bronchitis, chest pain, and other heart and lung conditions. Warmer temperatures lead to a longer pollen season, and increased carbon dioxide in the air leads to higher pollen levels and more potent pollen. These factors make allergies and asthma worse and more common. Higher humidity and flooding from heavy downpours can lead to dampness and growth of mold indoors, increasing allergies and worsening asthma.

changes can lead to an increase in the number and geographic range of disease- carrying mosquitoes, eas, ticks. Mosquitoes that carry diseases like West Nile virus and dengue fever thrive in conditions that are becoming more common, and there is concern that malaria could reemerge in the United States. Ticks that carry Lyme disease have become more numerous in many areas and have expanded their range northward and westward. The tick that carries Lyme Disease is reported in 45.7% of U.S. counties, up from 30% in 1998. As these insect carriers of infection move to new areas, diseases not normally found in those areas can spread.

conditions can lead to contamination of drinking water, recreational waters, fish, and shell fish—all of which can make people sick. For example, heavy rains can cause fertilizers and animal waste from farms to be flushed into rivers, lakes, and oceans. There, the excess nutrients and warm waters promote the growth of algae, viruses, parasites, and bacteria such as Salmonella, E. coli and Vibrio. People get exposed to these pathogens by drinking or swimming in contaminated water, or by eating contaminated fish and shell fish. This can cause diarrhea and vomiting and, in severe cases, paralysis, organ failure, and death. A 1993 Cryptosporidium outbreak in Milwaukee, which sickened more than 400,000 people, coincided with record high flows in the Milwaukee River, a reflection of the amount of rainfall in the watershed. The toxic algae bloom in Lake Erie that required shutting down the water supply in Toledo, Ohio, in 2014 is another example.

heavy downpours and flooding can spread fecal bacteria and viruses into fields where food is growing. Higher sea surface temperatures can lead to more pathogens and greater accumulation of mercury and other heavy metals in seafood. Foodborne illness has long been known to peak in summer due to the heat. Because pests, parasites, and bacteria thrive in warmer temperatures, farmers are using more pesticides on crops and drugs in livestock, which can cause health problems. The geographic range of mold and associated toxins is also expanding, affecting corn, peanuts, cereal grains, and fruit.

Many people exposed to the worst extreme weather events experience stress and serious mental health consequences including depression, anxiety, post-traumatic stress disorder (PTSD), and increases in suicidal thoughts and behavior. Such disasters are also associated with increases in alcohol or drug abuse. Children may also experience prolonged separation from their parents. Beyond the well-known risks specific disasters pose to our mental health, the physical, social, and economic stresses created by climate change all increase our risk of mental health problems

In summary, Climate Change impacts are not simply some far and distant intangible, they are here and now and are also very specific. As climate changes escalate, so also will its impact.