The Arctic sea ice extent has never been seen this low before at this time of year.

Right now in the middle of winter it should be growing, but it is not, the growth has once again stalled.

To drive this point home, here are a couple of extracts from Michael Le Page’s Jan 16th article in New Scientist …

The area of the world’s oceans covered by floating sea ice is the smallest recorded since satellite monitoring began in the 1970s. That means it is also probably the lowest it has been for thousands of years …

…The extent of Arctic sea ice should be growing rapidly during the northern hemisphere winter. But not only has the Arctic been warming rapidly, this winter repeated incursions of warm air have pushed temperatures even further above average.

It has been so warm that on occasions this winter the sea ice coverage has actually temporarily shrunk,…

…In the Arctic, by contrast, there is a long-term decline in sea ice due to global warming. This warming seems to be weakening the winds that circle the pole, allowing warm air to intrude into the Arctic.

And when warm air intrudes, cold air spills south. This is why parts of Asia and Europe have experienced unusually cold weather at times this winter….

You might perhaps criticise me for repeating myself and yet again posting about this, but right now I would argue that this is the most important story. In the long term, this unfolding saga will be remembered.

It is a continuous and unfolding story of a rapid decline in the extent of the Arctic sea ice. This is not a natural variability, we are doing this. It is a rather stark illustration of the impact of global warming. Total #Arctic sea ice collapse is not an “if”, it is simply a matter of “when” and that “when” is fast approaching.

It is perhaps also worth noting that the sea ice extent might rebound a bit next year. That however would not be a reprieve. Short term bounces should not simply be expected, but should be anticipated. The big picture here is the longer term downward trend, and that will continue unabated. 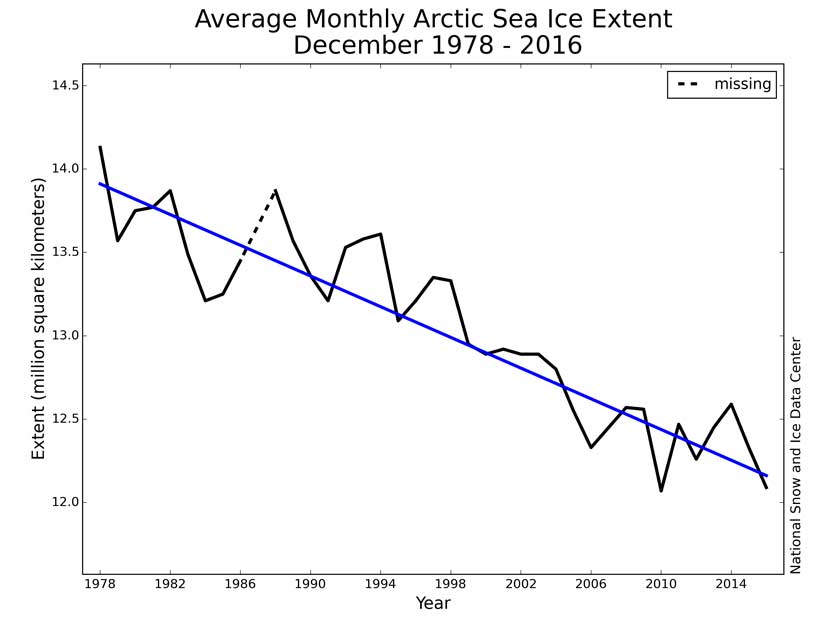 Wait … I thought that Dec 2016 was the lowest ever sea ice extent in the Arctic, why does the above show something different?

NSIDC explains the above diagram as follows …

Maybe daily updates are excessive, but I think it's a story that should be told… Record low #Arctic sea ice extent continues (@NSIDC data) pic.twitter.com/mFZZeNEWO6

Ah, geez, there's the big temperature spike (well above average) today from the current weather setup in the #Arctic… pic.twitter.com/I8xnR8km30

#climatechange is a fact – 4maps of the #Arctic from National Geographic (published 1999-2014) are convincing. pic.twitter.com/votc7iURH9