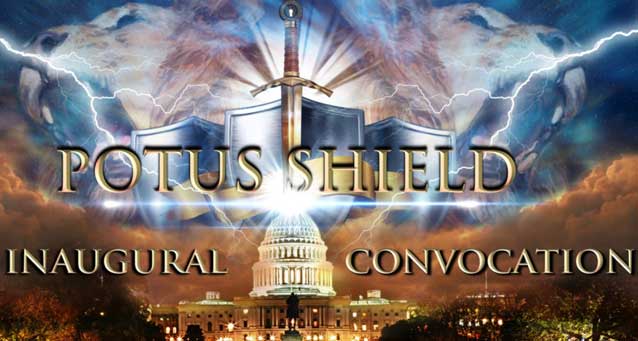 Christian Today reports on the truly weird behaviour of some evangelicals …

hundreds of “prayer warriors” have descended on Washington D.C. to undertake a crucial mission: protect U.S. President-elect Donald Trump by building a “prayer shield” around him ahead of his Jan. 20 inauguration.

Among these prayer warriors are the members of a new group called POTUS Shield (as in President of the United States) who gathered inside the National Press Club on Thursday, CBN News reported.

Pastor Eric Majette from Virginia Beach, Virginia said POTUS Shield is composed of pastors from all over America.

“We’re actually a prayer group. We pray for leaders across our nation — a group of pastors come together to pray for our nation and our leaders, particularly the new administration,” he said.

I’m not actually sure I really grasp what is going on here, and so it rather naturally leads to some questions.

Q1 In the context of Free Will, how does this work?

If indeed there is a belief in free will, namely the religious idea that humans determine their own fate and that the God they believe in will not override that, then what are they trying to achieve here?

Their stated goal is as follows …

“We’re really not looking for Mr. Trump or any human to change America, but we know God can and will do it,” she said.

If humans are not expected to actually do anything or to have their free will tweaked supernaturally, then what exactly is this “change”, how would they measure it and work out if anything actually happened. What are they expecting this to actually do?

Q2 What exactly is Prayer?

It is basically a belief that you can talk to God and ask him to do something. How does this work?

If you give it some thought, then how exactly does this concept work?

Q3 Why is it necessary to be in a specific place?

They claim that this is …

A council of prelates assembling to raise up a spiritual shield in Washington, D.C. prior to President-Elect Donald Trump’s inauguration.

Why specifically Washington, and for that matter what exactly is a “spiritual shield”, what does that even mean?

Words generally mean something, yet such words do not actually appear to have any meaning at all.

Trump as a Christian Icon!!

Why exactly is such emotional support for Trump and his team even a thing?

He is clearly that most dishonest individual to have ever been elected to sit in the White House. I can of course list other numerous character flaws, but I need not even do that, it is all well known and very much in the public domain. All that should disqualify him, and yet here are the folks who claim the high moral ground coming out in droves to support the most corrupt and immoral US president ever seen. We are also now faced with an administration that will be a disaster of epic proportions on so many different levels. Already we have seen the first steps to obliterate ACA and leave millions to either fund themselves with cash they don’t actually have or die.

The rich are to be enriched even further while the poor are being dumped and ground down even further.

In response, the reaction of many (not all) Evangelicals is to rush out and rally around him with reams of support.

Do they not grasp that this support is a self-certified judgement against their very integrity, and that it reveals that the moral high-ground they claim is actually a rather repugnant cesspit.

What is Going On?

It might be tempting to blame “fake news” for the rise and now the support of Trump, but we do also need to understand what caused it to gain such traction. It is complex, very complex and so anything I write is perhaps a tad simplistic. But I shall strive to use a few broad brush strokes to do so anyway. Needless to say, simply identifying what is and is not fake news is just addressing a symptom. While it will help, it does not actually address the real root causes.

Humans often respond emotionally and do not apply analytical thinking.

In economic terms, many have been left behind by change. It is not going to get better, but instead will get far worse. A rising tide of technological change will continue to impoverish many and enrich many others. Jobs have vanished, not to some offshore sweatshop, but instead have simply ceased to exist due to technological change. More of the same is yet to come. To give you a very simple example, imagine if you will, a world in which truck drivers are no longer required because the trucks can drive themselves. How many will that impact and what will happen to them all, how will they feel about being cast aside?

Within a religious context, belief is being challenged as never before. There is a rising tide of disbelief, the number of nones continues its upward trend. Progressiveness within society towards more tolerance also continues unabated. Those with rigid beliefs find that they are at odds with much of this and so that ignites a feeling of deep fear and insecurity.

People quite naturally react at an emotional level.

The emergence of an individual who dispenses meaningless emotional sound bytes that salve and sooth the despair and fear quite naturally sucks in vast numbers who cling to it a hope for something better.

Needless to say, they are going to be bitterly disappointed. Delving into that is perhaps a topic for another day.

So the point is this. The Washington POTUS Spiritual shield is in essence an emotional response and not a rational one. It helps to alleviate the feelings of helplessness by granting the illusion of control.

In many respects belief has always been like this, it is not something new. Humans can and do attribute random events to malicious dark forces, and deploy a ritualistic religious response to gain the semblance of control. It does not actually do anything externally, but does at a psychological level help calm the inner storm, and so things like this thrive, especially in an age of change.