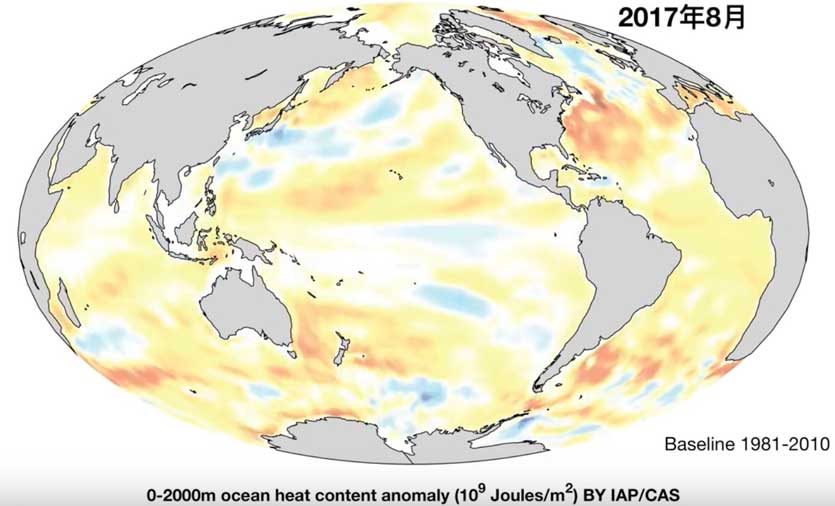 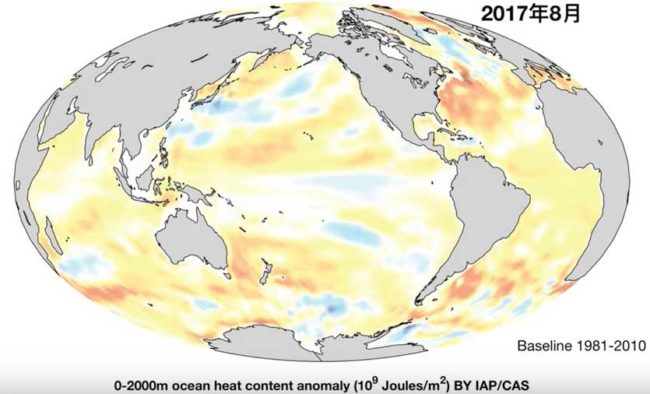 A new paper has been published by the Chinese International Center for Climate and Environment Sciences (That’s part of the Chinese Academy of Sciences). Within it they present their analysis of data gathered from all around the earth’s oceans and demonstrate a very clear ongoing ocean warming trend.

There is a short clip that visualises the data …

As suggested by the title, there has been a continuous upwards trend of ocean warming and 2017 has been the warmest so far.

They are not a lone voice here, the World Meteorological Organization stated in November 2017 that “Global ocean heat content in 2017 to date has been at or near record high levels”.

We know that CO2 acts as a greenhouse gas trapping heat, and we also know that the amount of CO2 within our atmosphere has dramatically increased and it at a record breaking new high (see below) … 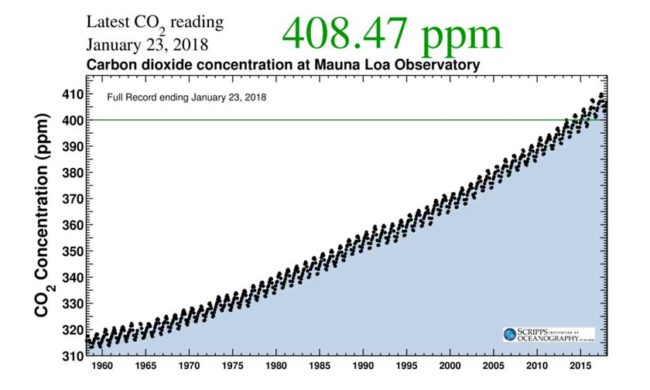 What is perhaps not so well appreciated is that as much as 90% of the excess heat being generated by the increase in CO2 is being absorbed by the world’s oceans. Within the atmosphere there is a great deal of weather related variability that can tend to mask what is actually happening, but turn to the oceans and the ongoing trend becomes a lot clearer.

Below you can see a table from the paper that uses a bar graph to illustrates this, and as you can see, the last five years have been the warmest … 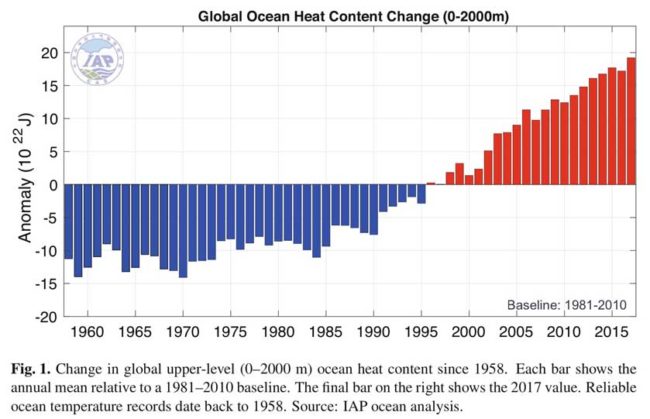 You might perhaps wonder just how global this is.

In 2017 the increase has been observed right around the globe and is not restricted to just one region. Interestingly enough the Atlantic and Southern oceans (south of 30◦S) did show more warming than the Pacific and Indian oceans.

Increase ocean temperatures and there are measurable consequences …

What is their data source?

You might wonder if we have to take their word on this or if the raw data is available for anybody to independently verify. It is the later. The data they used came from the publicly available sources such as the Argo network (this century), and also from the National Oceanic and Atmospheric Administration/National Centers for Environmental Information (NOAA/NCEI).

If indeed under the Trump administration the US turns its back on science and technology, then others are willing and also able to continue forward measuring and analysing.

Argo consists of close to 3,900 ocean based floats that continuously monitor what is going on. It is quite literally a real-time measurement. This is not a US centric program but instead is an international effort.

Each individual float is designed to run a continuous 10 day cycle that involves it sinking down to about 2000m and then ascending again gathering temperature and salinity data. When it hits surface it then phones home the details and starts the cycle again.

The Argo data is freely available to anybody.

This is all perhaps a cue for Donald Trump to once again demonstrate just how disconnected he is from reality by re-tweeting out  his claim that climate change is a Chinese hoax.

Least you wonder, yes, he really did tweet that claim out and that tweet is still there …

Being reality-challenged is not simply something that dates back to the time of that tweet, in an interview just a few days ago he demonstrated a rather astonishing lack of understanding regarding very basic facts.

Meanwhile the oceans will continue to heat up and that trend will not change while the amount of CO2 within our atmosphere continues to rise.

(Hint: “No” is not a realistic reasonable answer)