For those living in the arctic region, there is no debate regarding the reality of climate change. Each and every year they can see the ongoing decline of sea ice. Every season marks another data point.

If you check out the National Snow and Ice data centre then you can find very precise measurements collected via satellite. This grants us a view of the entire arctic and also a yields trend lines over the years. Their latest update (dated 19th Sept) is this … 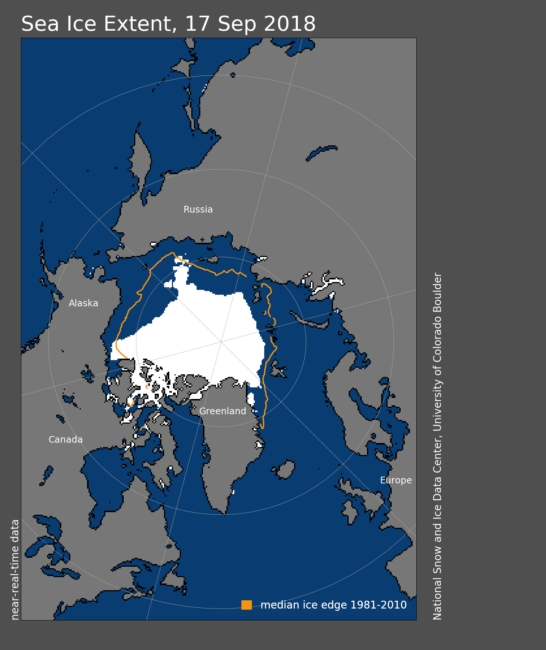 Study: Changing state of Arctic sea ice across all seasons

Subject matter experts from UCL, NSIDC, and the Max Planck Institute for Meteorology have published a new study.

Climate Change is not simply a seasonal summer event, it is impacting the arctic for the duration of the entire seasonal cycle.

They find that relative to the 1981–2010 reference period, recent anomalies in spring and winter sea ice coverage have been more significant than any observed drop in summer sea ice extent throughout the satellite period. For example, the sea ice extent in May and November 2016 was almost four standard deviations below the reference sea ice extent in these months. Decadal ice loss during winter months has accelerated from −2.4 %/decade from 1979 to 1999 to −3.4%/decade from 2000 onwards.

They also make it very clear that this is not part of a normal cycle, we are doing this. Across all months, they identify a robust linear relationship between pan-Arctic sea ice extent and total anthropogenic CO2 emissions. The annual cycle of Arctic sea ice loss per ton of CO2 emissions ranges from slightly above 1 m2 throughout winter to more than 3 m2 throughout summer.

With such a clear relationship between CO2 emissions and sea ice, they can advise on exactly how much more CO2 will lead to total Arctic sea ice loss. They find that the Arctic Ocean will become sea-ice free throughout August and September for an additional 800 ± 300 Gt of CO2 emissions, while it becomes ice free from July to October for an additional 1400 ± 300 Gt of CO2emissions.

Why should we care, it is all far away?

Sea ice plays a critical role in the Earth’s climate by regulating the exchanges of heat, momentum and moisture between the atmosphere and the polar oceans, and by redistributing salt within the ocean.

Because of its high reflectivity, sea ice reflects the majority of the sun’s radiation reaching the surface back to space, which efficiently cools the polar regions of our planet. As sea ice melts at its surface, its surface albedo is lowered, which in turn increases the amount of the sun’s energy absorbed by the ice surface and further enhances ice melt. When the ice completely melts, this solar radiation is absorbed by the darker ocean surface, generating a positive feedback that amplifies Arctic air temperatures in autumn and winter as the ocean returns the heat gained in summer back to the atmosphere. This positive feedback process is one of the reasons why the polar regions react far more strongly to a rise in global mean temperature than most other parts of our planet, and it is part of the explanation for why the Arctic has warmed faster than the rest of the globe during the last few decades.

Impact: Arctic warming may trigger concurrent processes that can be felt not only by Arctic communities, but in communities around the world through its potential influence on large-scale weather patterns

The following table shows the anomalies in monthly sea-ice extent from November 1978 through July 2018. The colors indicate how many standard deviations sea-ice extent in a given month was above or below the mean sea-ice extent of the reference period 1981–2010.

Key Updates from the Study

That last one means we can calculate when the Arctic will be ice free.

To get to an ice free August and September we simply need to add roughly an additional 800 ± 300 Gt.

Our current rate of emissions is 40 Gt CO2 per year … I’ll leave you to do the maths on the last bit.

Arctic sea ice reached its annual minimum extent on Sept. 19, and then again on Sept. 23, 2018. @NASA_ICE & @NSIDC watched as the ice shrunk to 1.77 million square miles on both dates, tied with 2008 & 2010 for the sixth lowest sea ice minimum on record. https://t.co/oTntz8qrBT pic.twitter.com/LihZLbM5Os