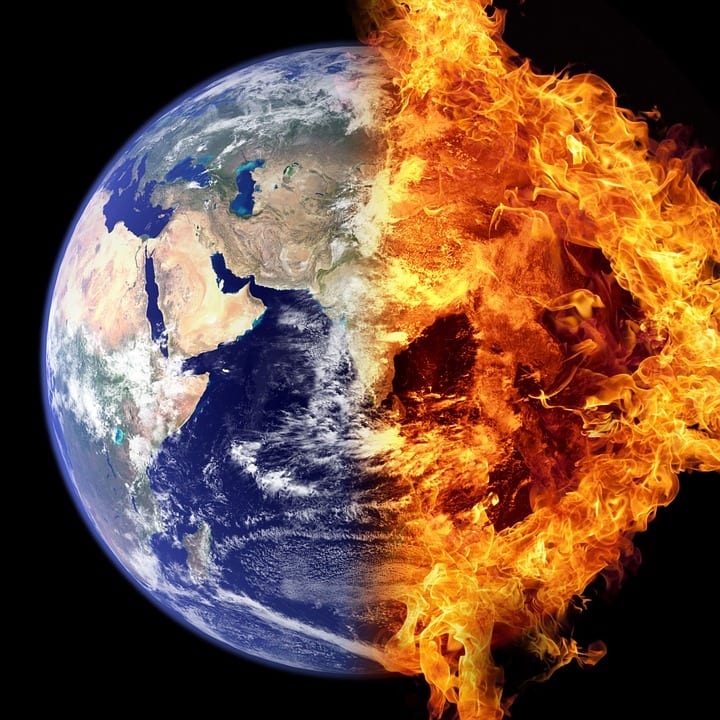 We know specific things regarding climate change. For example, we know that we have already emitted rather a lot of CO2. We can even quantify how much. We know that CO2 hangs about for a long time in the atmosphere. We also know that it is a greenhouse gas. In fact we have known much of this for a rather long time. We are now ramping up mitigation, many nations are rapidly moving towards net zero emissions.

Because we have already emitted rather a lot of CO2, then there is a line of thought that suggests that even Net Zero emissions is not enough. This is because it will still commit us to rather a lot of warming, hence we are all doomed … right?

Actually no, hit pause on that thought.

On Jan 4, 2020, a paper titled “Greater committed warming after accounting for the pattern effect” was published in Nature Climate Science.

Basically what the paper lays out is that the amount of baked-in global warming, from carbon pollution already in the air, is enough to blow us well beyond the international agreed upon goals to limit climate change. They are specifically talking about “committed warming” – the increase in future temperature based on past emissions. They calculate within this paper that we are committed to about 2.3 degrees Celsius of warming from past emissions.

That sounds rather dire and so we are indeed all doomed … right?

A rather important point is this.

How long will it take for us to get to that 2.3 increase?

If we went there rapidly by 2120, then we are indeed well and truly f**ked. We simply can’t adapt to such a rapid climate change. If however, it took us 100,000 years to go there, slowly slowly over a very long period of time, then we can adapt.

The authors of this paper do emphasise this very point….

If the world gets to net zero carbon emissions soon, 2 degrees of global warming could be delayed enough so that it won’t happen for centuries, giving society time to adapt or even come up with technological fixes, he said.

“If we don’t, we’re going to blow through (climate goals) in a few decades,” Dessler said. “It’s really the rate of warming that makes climate change so terrible. If we got a few degrees over 100,000 years, that would not be that big a deal. We can deal with that. But a few degrees over 100 years is really bad.”

Andrew E. Dessler, Department of Atmospheric Sciences, Texas A&M University, one of the co-authors of the paper

Getting to Net Zero truly does matter

Their voice is not unique, nor is this a new idea, this is the current scientific consensus.

Back in Oct 2020, climate scientist Michael E Mann was making this precise point, and so Mark Hertsgaard picked this up and wrote about it within a Guardian article at that time when he interviewed him …

Fortunately, there is encouraging news about climate science as well. It was long thought that Earth’s climate system carried a substantial lag effect, mainly because carbon dioxide remains in the atmosphere, trapping heat, for many decades after being emitted. Even if all CO2 emissions were halted overnight, global temperatures would keep rising and heatwaves, droughts, storms and other impacts would keep intensifying “for about 25 to 30 years”, Sir David King, the former chief science advisor to the British government, said in 2006.

Mann says research over the last decade has overturned this interpretation.

Using new, more elaborate computer models equipped with an interactive carbon cycle, “what we now understand is that if you stop emitting carbon right now … the oceans start to take up carbon more rapidly,” Mann says. Such ocean storage of CO2 “mostly” offsets the warming effect of the CO2that still remains in the atmosphere. Thus, the actual lag between halting CO2 emissions and halting temperature rise is not 25 to 30 years, he explains, but “more like three to five years”.

This is “a dramatic change in our understanding” of the climate system that gives humans “more agency”, says Mann. Rather than being locked into decades of inexorably rising temperatures, humans can turn down the heat almost immediately by slashing emissions promptly. “Our destiny is determined by our behavior,” says Mann, a fact he finds “empowering”.

We are at a key decisive moment and a better future is within our grasp.

The changes required are obvious, we must get to net zero.

There really is a way forward, we are not inevitable doomed.