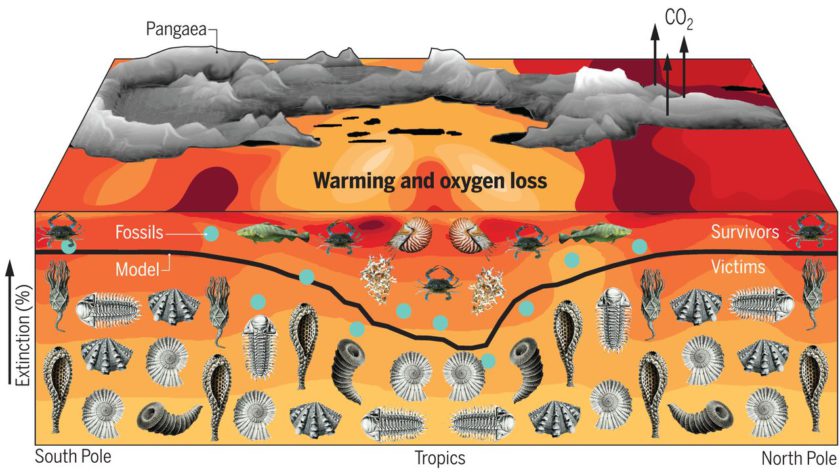 A common rebuttal to the current concern regarding the observed climate changes that are upon us is “Oh but the climate is always changing, this is nothing new, it has been worse in the past“. There is nothing “natural” about what is currently being measured and observed, we know with a high degree of certainty that the root cause is the vast quantity of greenhouse gases that we have been pouring into the atmosphere since the start of the industrial revolution. However, it is also correct to point out that in the deep past there have been very dramatic climate altering events.

These events bring us lessons, they enable us to see that what we are doing has the potential to have extremely dire consequences for life.

In september of this year Phys.org published an article about the end of the Permian which happened roughly about 252 million years ago. I’m going to first lay out snippets from a recent article that presents what happened as a mystery. I’ll then follow that up with the details of a new paper that has the answer – it is an answer that should very much worry us.

Phys.org: End-Permian extinction, which wiped out most of Earth’s species, was instantaneous in geological time

What follows below in italic text has been extracted from a Physical.org article from last Sept 2018. These extracts are designed to give you a quick feel for it all …

…The most severe mass extinction in Earth’s history occurred with almost no early warning signs, according to a new study by scientists at MIT, China, and elsewhere.

The end-Permian mass extinction, which took place 251.9 million years ago, killed off more than 96 percent of the planet’s marine species and 70 percent of its terrestrial life—a global annihilation that marked the end of the Permian Period. ….

…”We can say for sure that there were no initial pulses of extinction coming in,” says study co-author Jahandar Ramezani, a research scientist in MIT’s Department of Earth, Atmospheric, and Planetary Sciences. “A vibrant marine ecosystem was continuing until the very end of Permian, and then bang—life disappears. And the big outcome of this paper is that we don’t see early warning signals of the extinction. Everything happened geologically very fast.”…

So what happened back then, what caused a sudden mass extinction on a global scale?

A new study just published has an answer. (Given the title, and opening of this posting, you can probably guess where this is going)

What happened 252 million years ago is called the “Great Dying,”. What led to the extinction of 96% of all marine life and 70% of all land based life? This new study brings an answer that should very much worry us because it has parallels to what we are currently observing.

The new conclusion is that increased marine temperatures and reduced oxygen availability were responsible for a majority of the recorded extinctions. Because similar environmental alterations are predicted outcomes of current climate change, we would be wise to take note that we face the same fate if we take no action.

Here now is a brief overview via Science that explains the details of this new study.

Climate change triggered by volcanic greenhouse gases is hypothesized to have caused the largest mass extinction in Earth’s history at the end of the Permian Period (~252 million years ago). Geochemical evidence provides strong support for rapid global warming and accompanying ocean oxygen (O2) loss, but a quantitative link among climate, species’ traits, and extinction is lacking. To test whether warming and O2 loss can mechanistically account for the marine mass extinction, we combined climate model simulations with an established ecophysiological framework to predict the biogeographic patterns and severity of extinction. Those predictions were confirmed by a spatially explicit analysis of the marine fossil record.

The impact of climate change on marine biodiversity depends on both its magnitude and on species’ diverse biological sensitivities. Tolerances of marine animals to warming and O2 loss are physiologically related and can be represented in a single metric: the ratio of temperature-dependent O2 supply and demand rates. This ratio, termed the Metabolic Index (Φ), measures the environmental scope for aerobic activity and is governed by ocean conditions as well as thermal and hypoxia sensitivity traits that vary across species. If climate warming and O2 loss reduce Φ below the species-specific minimum requirement for sustained ecological activity (Φcrit), the ocean would no longer support active aerobic metabolism and, by extension, long-term population persistence.

We simulated the greenhouse gas–driven global warming at the end of the Permian using a model of Earth’s climate and coupled biogeochemical cycles that matches geochemical proxy data. The imposed increase in atmospheric greenhouse gas levels raises near-surface ocean temperatures by more than ~10°C and depletes global marine O2 levels by almost 80%.

To predict the impact of these changes on animal habitat and survival, we measured the frequencies of Metabolic Index traits in diverse living species and used them to define a set of model ecophysiotypes. We populated the model Permian ocean with each ecophysiotype wherever conditions provide viable habitat (Φ ≥ Φcrit), yielding an ocean with diverse, locally adapted ecophysiotypes throughout all regions. Across the climate transition, however, ocean warming increases the metabolic O2 demand amid declining supply; this removes large fractions of global aerobic habitat for the vast majority of ecophysiotypes and implies a high likelihood of extinction. We simulated the resulting mass extinction of ecophysiotypes and found a robust geographic pattern: Extinction intensity should have been lower in the tropics than at high latitudes. The cause of lower tropical extinction is that organisms initially inhabiting these warm, low-O2 environments can better exploit those conditions when they arise globally, whereas the habitats of more polar species disappear completely.

To test the geographic selectivity of the model extinction, we compared model predictions to spatially explicit reconstructions of genus extinction from the marine fossil record. We found that across diverse taxonomic groups, the observed extinction intensity indeed increases with latitude, consistent with the predicted signature of aerobic habitat loss. Comparison of the model to the fossil record implies that temperature-dependent hypoxia can account for more than half of the observed magnitude of regional extinction (i.e., extirpation).

Ocean warming and O2 loss simulated in an Earth System Model of end-Permian climate change imply widespread loss of aerobic habitat among animal types with diverse thermal and hypoxia tolerances. The resulting extinctions are predicted to select most strongly against higher-latitude species, whose biogeographic niche disappears globally. The combined physiological stresses of ocean warming and O2 loss largely account for the spatial pattern and magnitude of extinction observed in the fossil record of the “Great Dying.” These results highlight the future extinction risk arising from a depletion of the ocean’s aerobic capacity that is already under way.

The denial by the Trump administration of Climate Change is not simply a denial of a climate change that concerns the climate getting a bit warmer and so leading to a few occasional nasty weather events. Taking no action has the potential to lead to the complete extinction of our species.

It’s not too late … yet. We can still take decisive meaningful action, but the window for doing so is rapidly closing.