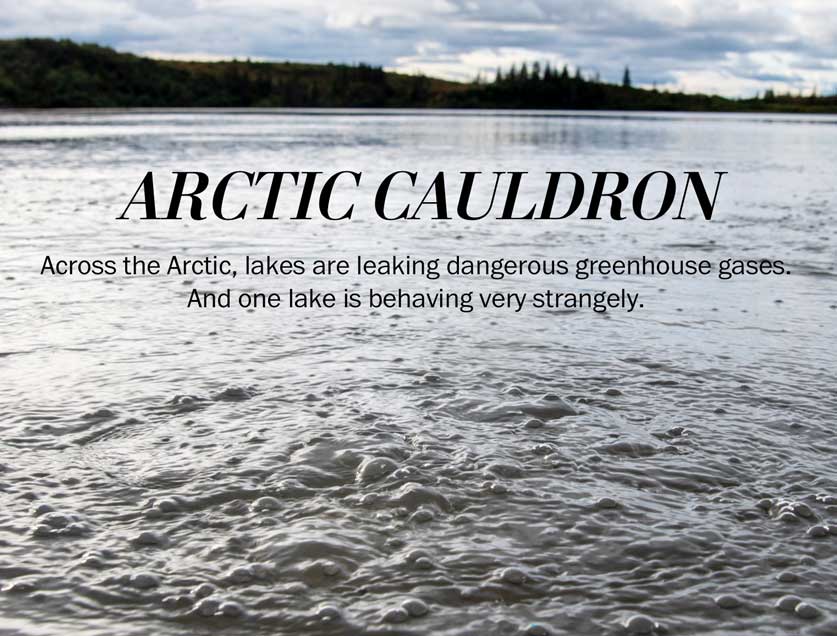 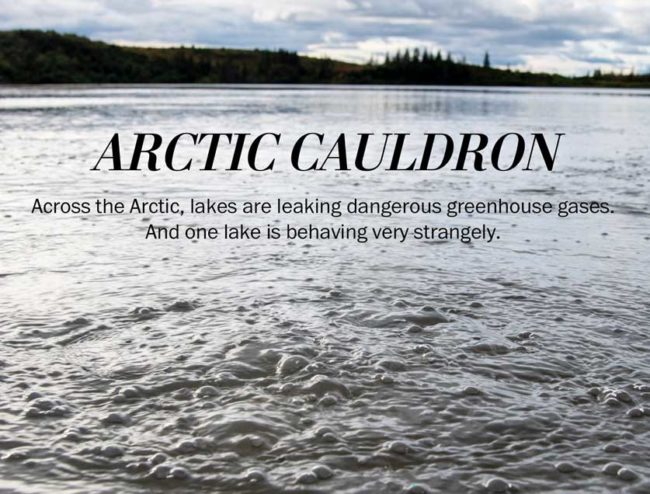 The Washington Past has a great article by Chris Mooney and others. Beyond the words we also have some really cool graphics and images. It all rotates around research by Katey Walter Anthony of the University of Alaska at Fairbanks into an Arctic Cauldron that is emitting huge amounts of methane.

Titled “Arctic Cauldron”, you can find it here. I highly recommend it as a great read.

The article also makes reference to a YouTube clip of Katey …

The first time Walter Anthony saw Esieh Lake, she was afraid it might explode — and she is no stranger to the danger, or the theatrics, of methane. In 2010, the University of Alaska at Fairbanks posted a video of the media-savvy ecologist standing on the frozen surface of an Arctic lake, then lighting a methane stream on fire to create a tower of flame as tall as she is. It got nearly half a million views on YouTube.

Alas no link. Well never mind, here it is …

This is the core of the story …

Scientists have been puzzling over a dramatic spike in atmospheric methane levels, which since 2006 have averaged 25 million tons more of the gas per year. Walter Anthony’s study found that Arctic lakes could more than double this increase as well.

Overall, if Walter Anthony’s findings are correct, the total impact from thawing permafrost could be similar to adding a couple of large fossil-fuel-emitting economies — say, two more Germanys — to the planet. And that does not take into account the possibility of more lakes like Esieh, which appears to be a different phenomenon from thermokarst lakes, emitting gases faster. 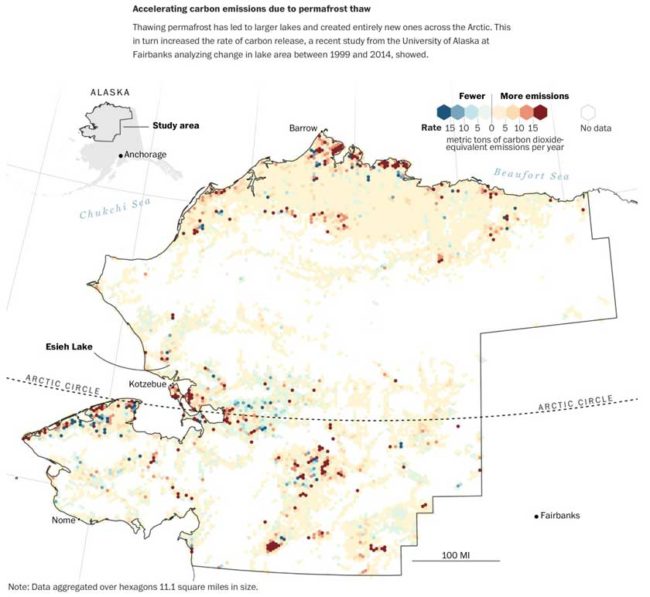 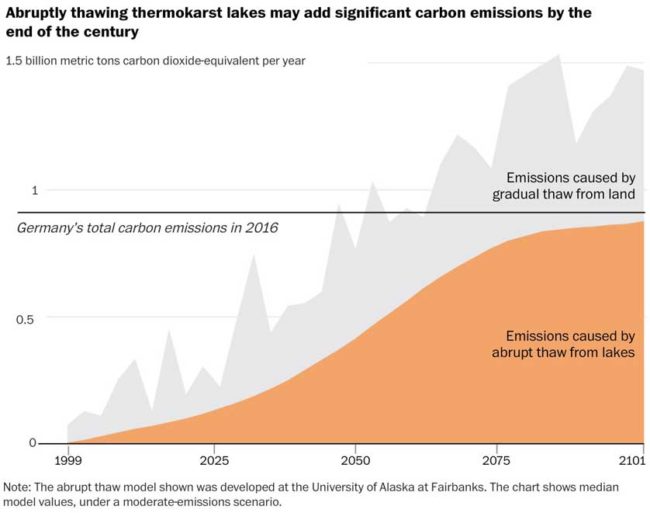 This is actually the Washington Post, not a study, yet such details appear to suggest they behind all this is a study. There is indeed, it tells you that there is indeed a study … but alas no links.

OK, here you go, this is the actual paper.

Yes, this is the right study, Katey Walter Anthony is the lead author. What is also cool is that her husband Peter is a co author. It is an open access article, hence you can read it all.

Permafrost carbon feedback (PCF) modeling has focused on gradual thaw of near-surfacepermafrost leading to enhanced carbon dioxide and methane emissions that accelerate globalclimate warming. These state-of-the-art land models have yet to incorporate deeper, abrupt thaw in the PCF. Here we use model data, supported by ﬁeld observations, radiocarbon dating, and remote sensing, to show that methane and carbon dioxide emissions from abrupt thaw beneath thermokarst lakes will more than double radiative forcing from circumpolar permafrost-soil carbon ﬂuxes this century. Abrupt thaw lake emissions are similar under moderate and high representative concentration pathways (RCP4.5 and RCP8.5), but their relative contribution to the PCF is much larger under the moderate warming scenario. Abrupt thaw accelerates mobilization of deeply frozen, ancient carbon, increasing 14C-depleted permafrost soil carbon emissions by ~125–190% compared to gradual thaw alone.These ﬁndings demonstrate the need to incorporate abrupt thaw processes in earth system models for more comprehensive projection of the PCF this century.

OK, the point is this.

Northern permafrost soils represent the largest terrestrial organic carbon pool on Earth. While frozen, this soil carbon reservoir is stable. However, recent observations and projections of future soil warming and permafrost thaw suggest that permafrost soil carbon will be increasingly vulnerable to decomposition by microbes that generate the greenhouse gases carbon dioxide (CO2) and methane (CH4). This release of permafrost carbon as greenhouse gases constitutes a positive feedback likely to amplify climate warming beyond most current earth system model projections.

Current climate models assume a top down gradual thaw and don’t consider the possibility of an abrupt thaw deeper down. This study highlights how this happens. Thermokarst, the most widespread form of abrupt permafrost thaw, occurs when soil warming melts ground ice, causing land surface collapse. Water pooling in collapsed areas leads to formation of taliks (unfrozen thaw bulbs) beneath expanding lakes, accelerating permafrost thaw far faster and deeper than would be predicted from changes in air temperature alone.

To put all that another way, the word that sums in all up is akin to “Yikes”.

1. Want to thank folks for reading my recent story about Esieh Lake, a strange lake in the Arctic that’s bubbling up lots of methane, and the scientists led by Katey Walter Anthony of @UAFairbanks, who are trying to plumb its secrets. https://t.co/E7nJX4YoBA … #thread pic.twitter.com/L7AH7hf7g8

Lakes in northern Alaska are emitting greenhouse gasses signaling a worrying trend in permafrost carbon emissions. Story by @chriscmooney, graphics by me and @monicaulmanu https://t.co/uu93ZLHZXp pic.twitter.com/VAwZkqyXPU