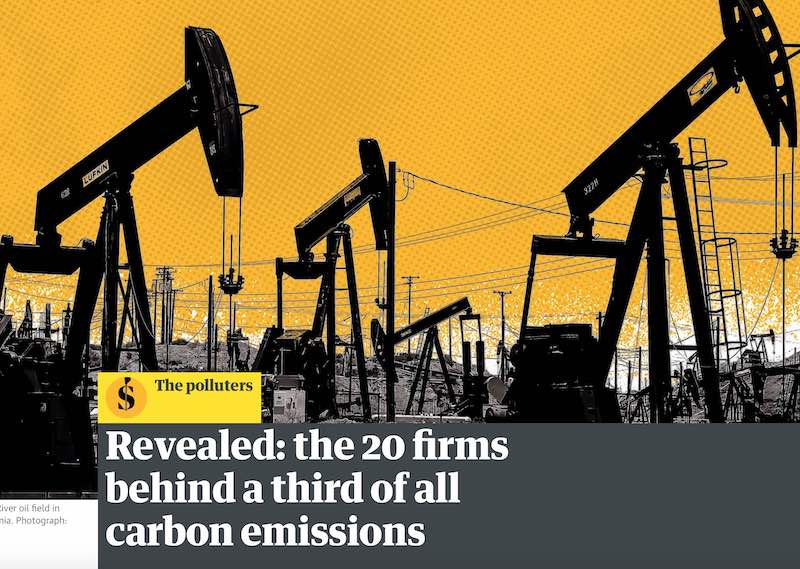 Revealed: the 20 firms behind a third of all carbon emissions

Who is behind this CO2 revelation?

The applause worthy revelation comes from the Climate Accountability Institute. They describe themselves within the press release for the above as follows …

They list their board of directors here. (Side note, Michael E Mann, the well-known climate scientist is one of their advisors).

Who are the revealed 20 tops worst CO2 emitters?

Beyond the Guardian story, what they actually have is a dataset that quantifies how much each of the largest oil, natural gas, and coal companies has contributed to the climate crisis since 1965.

Their revelation is that the Top Twenty companies have collectively contributed 480 billion tonnes of carbon dioxide and methane, chiefly from the combustion of their products. This equates to 35% of all fossil fuel and cement emissions worldwide since 1965 (global total of 1.35 trillion tCO2e).

What naturally drops out of this are a couple more observations

Note 1: It is not them, but rather their products

Basically it is all of us because we happily use their products. However, it is also worth noting that they estimate that the direct operational emissions are roughly ~12% of their total. That includes CO2 from flaring and venting and own fuel use, and fugitive methane.

They chose 1965 as the starting point for this new dataset because recent research has revealed that by mid- 1960s the climate impact of fossil fuels was known by industry leaders and politicians. Although global consumers from individuals to corporations are the ultimate emitters of carbon dioxide, they focus on the fossil fuel companies that, in their view, have produced and marketed the carbon fuels to billions of consumers with the knowledge that their use as intended will worsen the climate crisis.

What else does their data reveal?

What follows below however is perhaps the most important reveal. It is not about what has happened, but rather is focused on what is happening right now …

The climate crisis is worsening, global emissions are still rising, and they must peak immediately in order to reduce emissions by 45% by 2030 and net zero by 2050