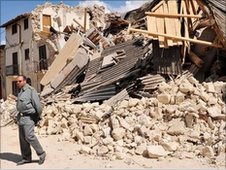 Some utter insanity has apparently broken out in Italy. The BBC Newsnight page reports that seven scientists are, in a Galileo-style inquisition, to stand trial next week for failing to accurately predict the precise timing of an earthquake. Wow … scientists accused of failing to predict an earthquake? Actually no, that is not what is happening here, it is not seismic prediction on trail at all, but is instead a charge that the scientists themselves did not set expectations correctly …

This extraordinary case has attracted international attention because science itself seemed to be on trial, with the seven defendants apparently charged for failing to predict the magnitude 6.3 earthquake that struck on the night of 6 April 2009.
…
The prosecution team said they never intended to put science on trial, that they know it is not possible to predict an earthquake.

What they are questioning is whether the six scientists and the official on trial, who together constitute Italy’s Commission of Grand Risks, did their jobs properly.

That is, did they weigh up all the risks, and communicate these clearly to the authorities seeking their advice?

The local investigator, Inspector Lorenzo Cavallo, said: “The Commission calmed the local population down following a number of earth tremors. After the quake, we heard people’s accounts and they told us they changed their behaviour following the advice of the commission.

The immediate press reaction is to view this as truly outrageous because there is currently no known way to say when an earthquake is going to happen with any precision, and so it should be no surprise to find that over 5,000 scientists from around the world have signed a letter supporting those on trial. But that is not what this case is about.

The prosecution point to a memo issued after a commission meeting on 31 March 2009, which was called because of mounting concerns about the seismic activity in the Abruzzo region, in central Italy. The memo stated that it was “improbable” there would be a major quake, but the threat could not be discounted. At the time commission members also told the local media that it was impossible to predict quakes, adding that six months of low-magnitude tremors was not unusual in the highly seismic region and did not mean a major quake would follow. And so the case they have is that all this assessment “persuaded the victims to stay at home”

Defence lawyers contend that since quakes cannot be predicted, the accusations that the commission’s scientists and civil protection experts should have warned that a major quake was imminent make no sense. “As we all know, quakes aren’t predictable,” said Marcello Melandri, defence lawyer for defendant Enzo Boschi, a scientist who heads the National Institute of Geophysics and Volcanology. Melandri added that the panel “never said, ‘stay calm, there is no risk‘”.

In Italy manslaughter charges for natural disasters are not unusual, but they have previously been focused on obvious failings such as breaches of building codes in areas at risk of quakes, so this trial will be a first. The real focus is about possible negligence in the provision of hazard-assessment advice, for which there is little or no case law or precedent. It is always difficult to convey scientific uncertainty without giving the impression that nothing useful is known, but overstating scientific certainties can be more dangerous. Volcanologists have adopted a protocol on professional conduct in crises (see go.nature.com/wjueqm), and some of the principles could be helpful to seismologists for situations such as L’Aquila.

SO how do I feel personally about all this. In many ways the following sums this up for me,

John McCloskey, professor of geophysics at Ulster University, said these scientists have spent their lives producing some of the most sophisticated seismic maps in the world.

He said it is an “outrage” that they are now on trial for manslaughter, adding that he signed the letter because “their peril is our peril”.

While it is of course always appropriate to learn lessons, it is simply not a great idea to go after the folks who are your only hope for understanding when such disasters might happen. Next time you will find that nobody will be prepared to say anything at all for fear of what might then legally happen.

1 thought on “Claim: “Six Scientists go on trial next week for failure to predict earthquake” – not quite correct.”