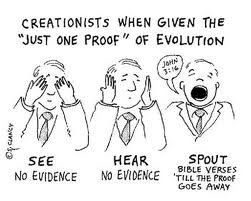 Last April Keith Gilmour, a School Teacher, spoke at an event organised by the Humanist Society of Scotland for the Edinburgh International Science Festival. The topic was “The Threat of Creeping Creationism in Scottish Schools.”. His approach was as follows:

As you might imagine, the creationist loons were all over him after the event. Dr Alastair Noble, Director of the risible Centre for Intelligent Design, claimed that it was “silly” and “scandalous” of him to draw this comparison. And so after the encounter they engaged in a written dialog, or to be more accurate a monologue, Keith sent a letter asking questions, and Dr Nobel refused to answer.