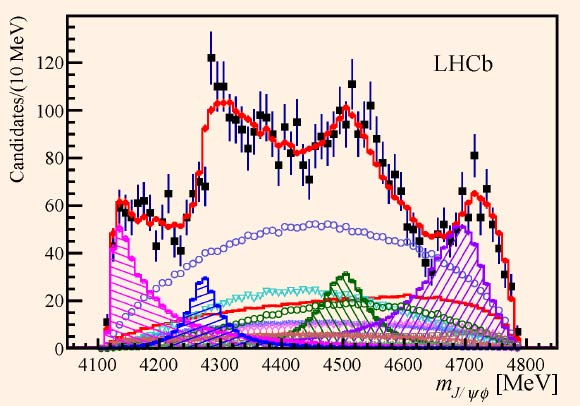 Now this is really interesting news (for some), CERN have announced the discovery of new previously unknown particles …

Physicists on CERN’s LHCb collaboration say they’ve observed three new exotic particles – X(4274), X(4500) and X(4700) – and also confirmed the existence of a fourth one, X(4140). According to the scientists, each of these particles contains two quarks and two antiquarks.

… This result has a large impact on the possible theoretical interpretations, and indeed it excludes some of the previously proposed theories on its nature.

The interest in these four states is also that they are the only known exotic candidates which do not contain u and d quarks, which are the lightest quarks and those which human beings and the matter around us are made of. As such, they may be more tightly bound than other exotic particles.

One other key point made by the discovery team is this …

It is important to emphasise that simple `bump-hunting’ in the mass spectra is not sufficient to learn about the nature of such complicated hadronic structures. Rather, a multidimensional full amplitude analysis, as described in the two papers submitted today, is crucial for data interpretation, and has allowed LHCb to characterise fully the particles, and to determine their quantum numbers.

We know about Mesons which are composed of one quark and one antiquark. There are very short lived and unstable.

We also know about baryons (such as protons and neutrons) that are made up of 3 quarks. This is what most of what we can see and touch is made of.

Now we are beginning to see that there are tetraquarks that are composed of 4 quarks, but it does not end there, there are also hints of pentaquarks – a five-quark particle.

The papers come from the LHCb collaboration. LHCb is an experiment set up to explore what happened after the Big Bang that allowed matter to survive and build the Universe we inhabit today. The LHCb announcement for all this is here

The CERN announcement is here.