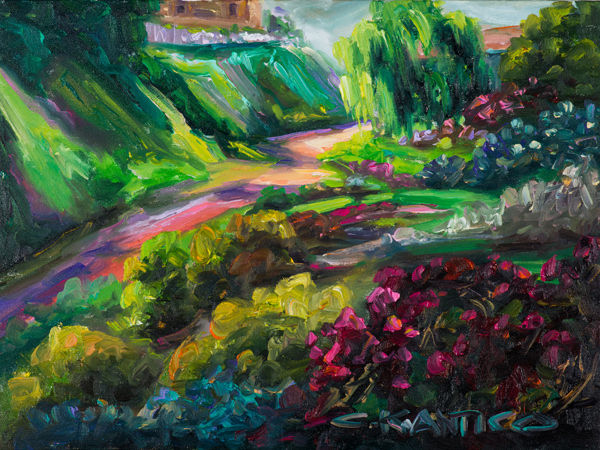 Most humans have three different cone cells within their eyes. It is these three variations that enables you to perceive colours. A word used to describe this is “trichromatic“. What is truly fascinating is that not everybody has just three variations of cone receptors, some have four and are tetrachromatic.

Tetrachromatic vision is something that is found in several species of birds, fish, amphibians, reptiles, insects, some mammals, and also apparently in some humans. Our early non-human ancestors are thought to have had four and so as evolution happened, we lost two and gained one. But, and this is the surprising thing, some humans have four and so can potentially see a lot more.

Do you have tetrachromatic vision?

Now here is a fun little test to find out.

Count the number of colours and shades you can see in the spectrum: 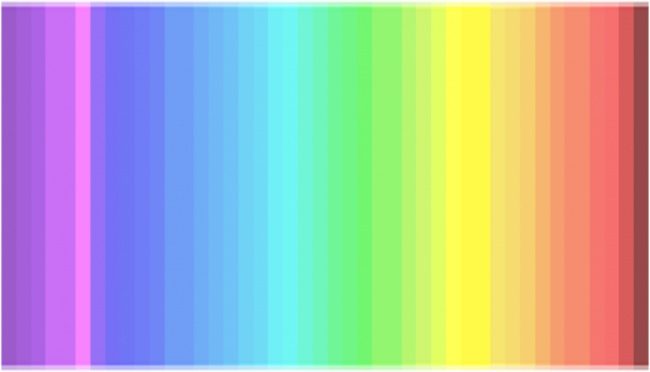 Using the number of variations you get is supposed to tell you what you are.

If your bullshit alarm has not yet tripped, then permit me to tip it over the edge for you.

Apparently, via the above test, I’m tetrachromatic.

That appears to be true for almost anybody who does the above test. What can we conclude, that perhaps everybody I know is tetrachromatic, or that the test is seriously flawed.

Debunking the above test

Snopes has already debunked the above test …

Origins:   On 28 February 2015, a fake online test for Tetrachromacy (a rare condition of having four cone cells in the eye) went viral on the social media site LinkedIn.

The test, which was posted just a few days after the Internet became obsessed identifying the color of a dress, asked viewers to count the number of colors in an image. The amount of colors perceived supposedly indicated the number of cones the viewer possessed. Those who spotted more than 32 colorswere informed that they had a unique fourth cone and were therefore tetrachromats:

Thousands of people took the test and proudly shared the news that they were a tetrachromat on Facebook and Twitter. The majority of those people, however, actually don’t see an unusually high number of colors.

According to the researchers at New Castle University’s Tetrachromacy Project, standard RGB (i.e., red-green-blue) computer monitors are not capable of displaying the range of colors required to create a reliable online test for tetrachromacy:

“Unfortunately, computer screens do not provide enough colour information to be able to ‘tap into’ the extra dimension that tetrachromats may possess. It is therefore impossible for an online test to investigate tetrachromacy.”

Even more absurd is that the online test I linked to claims that as many as 25% are tetrachromatic. Seriously now, that claim is truly grade-1 gold-plated nonsense …

Neitz told the Pittsburgh Post Gazette in 2006 that only about 2% of the female population are tetrachromats. Newcastle University neuroscientist Gabriele Jordan said that the number may be higher (about 12%), but in twenty years of research she has only been able to confirm the condition in one person

Basically yes. Here is an article about the one person who has been confirmed to actually have tetra chromatic vision.

Most people who are colour blind only have two functioning types of cone cells, which is why they can only see around 10,000 shades – and almost all other mammals, including dogs and New World monkeys, are also dichromats.

But there’s one doctor in northern England who has four cone cell types, taking the potential number of colours she can distinguish up to 100 million – colours most of us have never even dreamed of.

Identified only as cDa29, the scientists finally found this woman two years ago, but they’ve been searching for more than 25 year – and think there are more tetrachromats like her out there.

Having an extra cone cell does not appear to impart super-vision.

What is known is that the mothers and daughters of colour blind men have three normal cones and one mutant cone. That makes it a tad easier to find women who have four cones. However, when tested, it was found that their colour vision was not enhanced in any way, so clearly the fourth cone cell was not functioning.

Is that the end-game?

The history here is that back in 1948 a Dutch scientist named Hl de Vries first suggested that having four cones might be a possibility in humans.

de Vries was studying colour blind men. They have two normal cones and one faulty one that makes it hard to distinguish between red-green. When tested, he found that they needed to add more green or red to be able to match a mixture of both to yellow. He was curious, so he also tested the daughter of one. She had normal three cone sight and was not red-green colour blind, but she still needed more green or red to make the blend match a yellow.

What was going on?

Colour blindness only affected the men and not the women in families because daughters obtained three normal cones via their mothers. However, they also inherited one extra mutant but faulty fourth cone from their father – they had four cones, not three. This then led him to speculate that they might be seeing more than those of us with just three cones. (You can find this speculation buried within his paper).

In the 1980s a chap called John Mollon of Cambridge University found this obscure reference and decided to test it with a variation of the de Vries test. After no results, he concluded that the fourth cone was not active.

Gabriele Jordan from Newcastle University, a student of Mollon’s, picked up the mantle and decided to try something different. She tested 25 women who had this extra cone cell with a special test in which she flashed three coloured circles of light in their eyes. Those of us with three functioning cone cells would not see any difference, but somebody with four cone cells should be able to tell them apart. One of those she tested was able to do just that, she really could see differences each and every time. That was a few years ago back in 2012. You can read about that here in Discover magazine.

It is all quite interesting, but apparently is also highly obscure if all of those with a fourth cone cell do not have a functioning one. I would be fascinated to experience what somebody with functional tetrachromatic vision sees, but that is something I’ll never really grasp. Gaining a true appreciation would be as challenging for such a person to actually describe as it would be for me to explain to somebody with red-green colour blindness what seeing red and green as distinctly different and very vivid colours is like.

Then again, perhaps we can get a hint, because here is somebody with tetrachromatic vision that paints – that is where the painting at the top comes from.

Meanwhile, as for that on-line test that fools lots of people into thinking that they are tetrachromatic, well yes, that is indeed nonsense, and so my brief moment of dreaming about being a Marvel mutant with super vision turns out to be an Internet illusion.

64 thoughts on “Can you see what nobody else can see, are you a tetrachromat?”