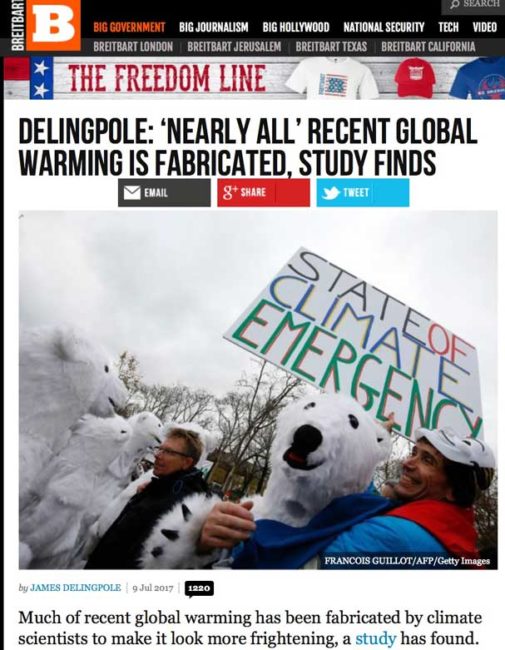 Tagging a claim as a “Breitbart Claim” is to more or less tag it as a “Fake News” claim, because this is a source that has no credibility for either accuracy or honesty. That’s not a specifically left wing vs right wing slur, but rather is a reflection of the track record they have established for the promotion of conspiracy theories without any evidence, and the publication of stories that are outright fiction.

Knowing that the author is James Dellingpole, an individual who is so decoupled from reality that he has seriously argued that air pollution is just fine is also not really going to help to add any credibility either.

However, let’s toss all this to one side and let the claim itself stand or fall on its own merits.

The article on Breitbart (pictured above) points to a study to establish the claim being made.

It turns out that the scientific “Study” that Mr Dellingpole links to is not actually a scientific study at all, but is instead a paper that has been published on somebody’s wordpress blog. I’m really not making this up. Mr Dellingpole specifically claims that it is a…

peer-reviewed study by two scientists and a veteran statistician

To be honest I’m astonished that Mr Dellingpole has even read it because when previously asked on a BBC documentary if he had ever read any peer-reviewed papers, he happily admitted that he never did that. However, given the observation that this supposed peer-reviewed study is not actually a peer-reviewed study at all, then it is perhaps understandable that he did read it.

The blog in question is run by Joseph D’Aleo a meteorologist who claims the title of Dr on the front page of the paper, but never actually finished his Ph.D

The claim of peer-review, comes from the observation that he had a few friends read it. They are listed on Page 2 of the “study”, and includes …

Somebody reached out and asked these folks how exactly they conducted their peer-reviews. One responded and confirmed that he had read it and acknowledged that he agreed with it … but that is not exactly how the peer-review process works.

Even though this is all highly problematic, let’s also toss all this to one side as well and see what we can make of the claim itself.

adjusted data used by alarmist organizations like NASA, NOAA, and the UK Met Office differs so markedly from the original raw data that it cannot be trusted.

He even has a diagram, so it just must be sciency stuff … right?

OK, let’s clear something up. The claim that this diagram shows the difference between raw data and corrected data is blatantly false. What this actually contains is a chart that shows you how 2017 data was used to correct previously corrected 2008 data. What it actually confirms is that when you get higher quality data from a far wider array of sources then you can get a clearer view of what is going on.

To be clear here, it is not Mr Dellingpole who is misrepresenting data, the “study” written by Mr D’Aleo is fully responsible for doing that.

Why is data adjusted?

The reality of climate data is that you do need to apply adjustments, so understanding why will help you to appreciate what is actually happening here.

What we start with is data that comes from a vast array of different sources. Land weather stations, ships, buoys, etc… Some is historical and some is modern, and how it is collected changes over time. This is a dataset that is being enriched all the time. If you want a consistent picture then you need to apply adjustments because over time what was done to collect the data changes. The classic example is that when collecting temperature readings from land stations then you need to account for the time of day it was collected if you want consistency.

You also can’t simply depend upon land based data points if you want to truly understand global warming, you also need to know what has been happening out across the oceans. Early datasets only included land based data, later revisions also include sea based data as well and so that leads to an overall adjustment.

There are many variables to consider and so you need to account for how people actually collect data. Historically at sea they tossed a bucket over the side, pulled it up, stuck a thermometer in and recorded that in the ships log. What time of day that happens can also influence the result. This bucket method was later revised to simply measure the temperature of the water via the engine intake valve. Data also needs to be adjusted to handle that. Today we measure things far more accurately and directly via a network of Buoys (Argo floats) that can collect temperatures from multiple ocean depths by slowly sinking and measuring as they go, then surfacing to phone home the results. Collectively taken together all of this is not going to be consistent so you do need to account for the differences.

Slowly, step by step researchers make adjustments and document exactly why such adjustments are warranted. None of this is a mystery and it is all clearly laid out.

The Incandescent Vapours and Translucent Surfaces of Denialism

What happens when you strip away the justification for such adjustments is the emergence of this “study” that is not really a peer-reviewed study at all from the denial community.

If you are not familiar with the ongoing conversation within the climate science community and why such adjustments are necessary, pragmatic, completely reasonable, and well documented, then you will be potentially fooled into thinking that something fishy is going on.

If indeed you present raw data, and then point out that there have been adjustments but you do not explain why, but instead you promote the idea that there is some grand conspiracy cooked up by NASA, NOAA and the UK Met Office, then this is clearly no longer science, but instead is politically motivated smoke and mirrors that is deliberately designed to manipulate you.

Here is a real example.

Sea surface temperature (SST) records are subject to potential biases due to changing instrumentation and measurement practices. Significant differences exist between commonly used composite SST reconstructions from the National Oceanic and Atmospheric Administration’s Extended Reconstruction Sea Surface Temperature (ERSST), the Hadley Centre SST data set (HadSST3), and the Japanese Meteorological Agency’s Centennial Observation-Based Estimates of SSTs (COBE-SST) from 2003 to the present. The update from ERSST version 3b to version 4 resulted in an increase in the operational SST trend estimate during the last 19 years from 0.07° to 0.12°C per decade, indicating a higher rate of warming in recent years. We show that ERSST version 4 trends generally agree with largely independent, near-global, and instrumentally homogeneous SST measurements from floating buoys, Argo floats, and radiometer-based satellite measurements that have been developed and deployed during the past two decades. We find a large cooling bias in ERSST version 3b and smaller but significant cooling biases in HadSST3 and COBE-SST from 2003 to the present, with respect to most series examined. These results suggest that reported rates of SST warming in recent years have been underestimated in these three data sets.

If you take into consideration all the adjustments that have ever been applied to the raw data then what you discover is that it actually reduces the rate of warming during the industrial period instead of increasing it.

If indeed the goal of such adjustments was to increase the rate for propaganda reasons due to some grand global conspiracy, then clearly the conspirators are highly incompetent.

So has Mr Dellingpole published in Breitbart details of a credible debunking of many decades of climate science and revealed that everybody working at NASA, NOAA and the UK Met Office is an incompetent buffoon?