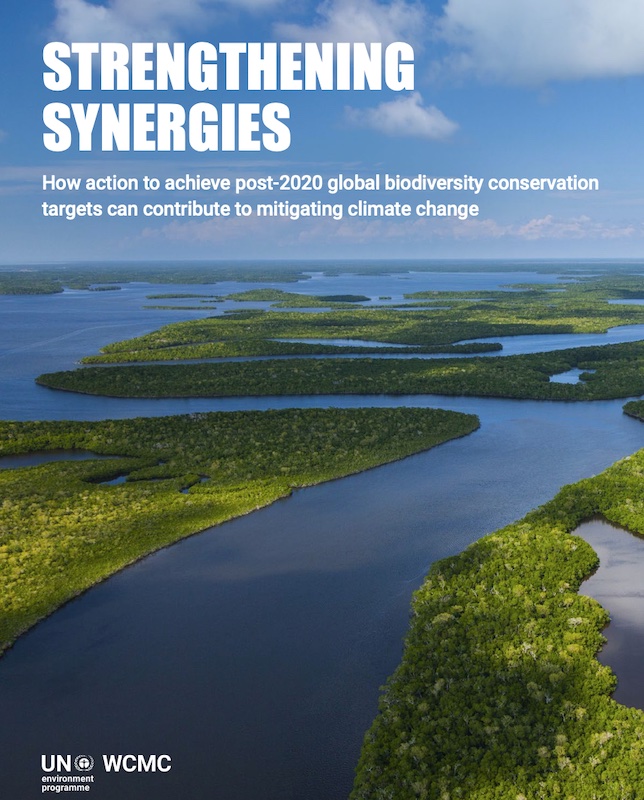 The are huge concerns that exist, namely Climate Change and also the rapid decline of biodiversity. Specific actions can be taken to address each, but a new report just published by the United Nations Environment Programme World Conservation Monitoring Centre (UNEP-WCMC) reveals the distinct advantage of deploying joined up thinking.

Published Nov 13, 2020, The report finds that conserving 30 per cent of land in strategic locations could safeguard 500 gigatonnes of carbon stored in vegetation and soils – around half the world’s vulnerable terrestrial carbon stocks – and reduce the extinction risk of nearly 9 out of 10 threatened terrestrial species.

Co-authored by the UN Environment Programme World Conservation Monitoring Centre (UNEP-WCMC) and a number of supporting partners, the research shows that when prioritising areas for conservation, accounting for biodiversity and carbon together can secure 95 per cent of the biodiversity benefits and nearly 80 per cent of the carbon stocks that could be obtained by prioritising either value alone.

The authors highlight the fundamental interconnectedness of the climate change and biodiversity loss crises, and make the point that more integrated approaches are needed to address them. Actions that capitalise on the contributions of nature, known as nature-based solutions, and are based on inclusive decision-making that recognises the land rights of indigenous peoples and local communities, are especially crucial to acting effectively to address climate change and biodiversity loss.

The analysis identifies well-known biodiversity hotspots as the most important regions to prioritise for nature-based climate solutions – these include: Brazil’s Atlantic Forest, Mesoamerica and large parts of Mediterranean biomes and South-East Asia, as well as other hotspots on the West African Coast, Papua New Guinea and the East Australian Rainforest. Other areas important because of the vast amounts of carbon they contain include the lowlands south of the Hudson Bay, the Amazon rainforest and the Congo Basin.

“November marks one year to go until the COP26 climate summit in Glasgow, and as co-hosts, we are in a strong position to galvanise global action. This important research underlines the critically important connections between climate and biodiversity and the urgent need to protect nature. In September the Prime Minister committed to protect 30% of our land by 2030 as we work to build back better and greener from the coronavirus pandemic. This builds on our campaign through the Global Ocean Alliance to protect 30% of the world’s ocean by 2030. We are encouraging all countries to increase their efforts to protect and restore nature as a solution not only to climate change, but biodiversity loss and poverty too.”

Zac Goldsmith, the UK Government Minister for Pacific and the Environment

“We are still in the turmoil of the tragedy and disruption of Covid-19, and scientists tell us that we only have a window of 10 years to solve the climate crisis and to reverse the severe trend of biodiversity loss. If we work together and we protect at least 30% of the planet by 2030, we will be on a clear pathway to meet the twin goals of climate change mitigation and biodiversity conservation. The road towards COP26 is critical to address this crisis”.

Sveinung Rotevatn, Minister for Climate and the Environment of Norway

“Climate change and biodiversity loss are twin crises that should be tackled together, with ambition and integrated action. This analysis highlights locations across the world where conserving land can best help to both keep carbon stocks safely stored away and boost protection for threatened species,”

ValerieKapos, one of the report’s authors and the head of Climate Change and Biodiversity at UNEP-WCMC

Greater ambition and action are needed

The findings underscore that greater ambition and action are needed to bend the curve of biodiversity loss and greenhouse gas emissions. As global progress is driven by national action, applying the analytical approaches used in this study to inform national scale decision-making will be key; this report supports the case for national climate targets (Nationally Determined Contributions) to incorporate ambitious policies for conserving and restoring nature.

November marks one year to go until the UN Climate Change Summit (COP26), which will be hosted in Glasgow next year by the UK in partnership with Italy. On December 12 2020, the UK, United Nations and France will co-host the Climate Ambition Summit alongside partners Italy and Chile, on the fifth anniversary of the landmark Paris Agreement. The findings of the report are expected to contribute to the growing body of knowledge on biodiversity and climate ahead of the start of the UN Decade on Ecosystem Restoration and the UN Decade of Action on the Sustainable Development Goals (2021-2030).