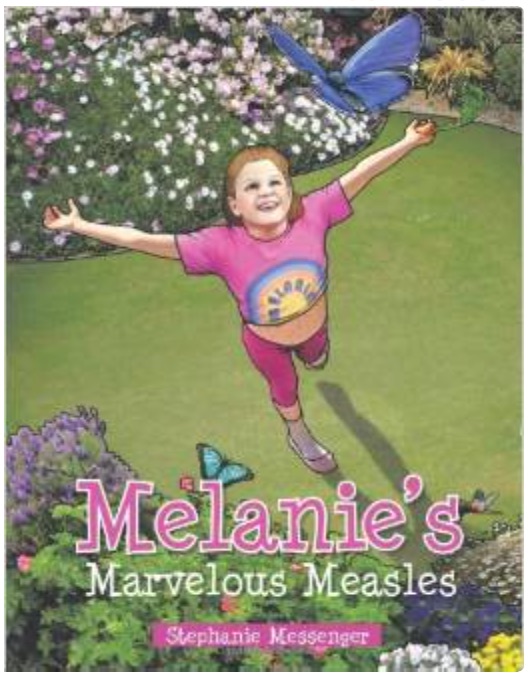 Stephanie Messenger, an anti-vaccine advocate who truly believes that giving your kids Measles is the best approach, published a book on Amazon entitled “Melanie’s Marvelous Measles“. In this she advances the following absurd idea …

Melanie’s Marvelous Measles was written to educate children on the benefits of having measles and how you can heal from them naturally and successfully. Often today, we are being bombarded with messages from vested interests to fear all diseases in order for someone to sell some potion or vaccine, when, in fact, history shows that in industrialized countries, these diseases are quite benign and, according to natural health sources, beneficial to the body

er no … that is quite frankly ignorance on steroids, history does not show that measles is “benign” and “beneficial”, even in 2013 96,000 children died from it and that is way down from the 545,000 deaths in 1990 and even further down from the 2.6 million deaths annually prior to the vaccination campaign, so actively promoting the idea that vaccines are bad is quite frankly nuts.

Luckly common sense is quite common, and so many agree that this is utter lunacy. Tempting as it might be to rant and yell, or hurl abuse in frustration, the best reply is satire, and so as you might imagine, some of the reviews are simply hilarious, and some are also quite tragic …

I’ve been having a hard time finding a way to tell my children why they have to suffer through dangerous and potentially debilitating diseases that were almost eradicated by Vaccines. Thanks to Melanie’s Marvelous Measles I now have an easy reader guide that makes me eldest feel less down about the fact he’s been crippled from Polio. Apparently telling him”Your grandfather had it in the 1920’s and he lived to be 52 thanks to a weakened heart” just hasn’t cheered him like it should.
Chloe, my 3-year was worried about the horrible scaring that came along with her case of Rubella. “Don’t worry dear,” I told her, “Remember Melanie’s Marvelous Measles? Melanie is more beautiful for her scars. If you kids don’t get sick, how else are we going to go on to build a glorious master race?” Unfortunately the Encephalitis she suffered from the high fever the measles caused means I have to repeat this over and over but the little girl on the cover gives her hope, and really, what else can we give our children?
In fact, Melanie’s Marvelous Measles has inspired me to seek out and expose them to a variety of diseases that previously only effected poor, underdeveloped countries.
Think of the unique life experience the bubonic plague could bring? To bad Small Pox is so hard to get, those horrifying blemishes they leave would be a real conversation starter for myself and my horribly misshapen children. If you think about it, really, I’m giving my white, middle-class, suburban offspring a great chance to understand equality in a way my college professor assured me Carl Marx would appreciate. After all, what unites the proletariat like sickness? It’s also a great chance to teach them how fun poverty can be. Just think of all the unique, money saving techniques we can devise so we don’t have to contract Dengue Fever in a 4-star hotel.

By Seabisquick on February 6, 2015
My infant daughter went blind after contracting measles from an unvaccinated child, and yet there’s no braille version of this wonderful book for me to give her someday to explain to her how awesome the disease that took her sight away is.
By Sandra Bradley on February 6, 2015

As a carpenter who specializes in itty bitty coffins I can’t say enough good things about this book, my customer base has been growing at an epidemic rate!

By Chris M.on February 6, 2015
Roald Dahl
Olivia, my eldest daughter, caught measles when she was seven years old.
As the illness took its usual course I can remember reading to her often in bed and not feeling particularly alarmed about it. Then one morning, when she was well on the road to recovery, I was sitting on her bed showing her how to fashion little animals out of coloured pipe-cleaners, and when it came to her turn to make one herself, I noticed that her fingers and her mind were not working together and she couldn’t do anything.“Are you feeling all right?” I asked her.
“I feel all sleepy, ” she said.
In an hour, she was unconscious. In twelve hours she was dead.
ByNathaniel E. Parkinson II “Nat Parkinson”on January 29, 2015
Don’t overlook the lesser known Dr. Seuss books in this series – “Horton hears an air raid siren”, “Oh the places you’ll itch”, “How the Grinch caught Chlamydia “, “And to Think That I Contracted It on Mulberry Street”, “Skull Fracture Mayzie”, “Hop on your remaining foot”, ” The 500 days in ICU of Bartholomew Cubbins”, and “If I Ran the Mortuary”.
ByFredricRiceon February 6, 2015

This is an excellent book for children! It gets children used to the idea of being maimed for life or dying outright due to preventable diseases thanks to their parents not loving them enough to learn even the rudimentary aspects of basic science, and when a child is burning up from fever or rotting from leprosy, reading about Melanie’s totally excellent adventures with preventable measles lets kids know that *other* children’s parents also don’t love them, they’re not alone in being hated by their parents.

From page 1 children are greeted with bright, happy, adventurous Melanie who is not at all constantly on the verge of dying hideously and carrying her disease out among other children just like them, and I think that’s a good thing to impart in children. After all, if Jesus didn’t want kids to die screaming choking on their own liquidating lungs, he wouldn’t have made deadly viruses!

Bybrittanyon January 29, 2015
Finally! A children’s book with an agenda I can get behind! I always thought I loved kids until I actually had one of my own and boy was I wrong! I researched anything and everything I could possibly do to get rid of the little brat, but I didn’t want to be arrested for murder and childhood cancer is just too darn unpredictable. Fortunately, I stumbled upon “Melanie’s Marvelous Measles”, and learned that there is a huge community of people who hate children as much as me! Thanks to Melanie, I was able to ignore my pediatrician’s recommendations to vaccinate my daughter before our trip to Disney World, all while acting like I want what is “best” for my child.
By Bola Verdeon February 6, 2015
My one star can become five when the book is released in braille. Having been blinded by this marvelous disease as a child I cannot enjoy the print version. Besides missing out on books in print and other visual wonders, being blind has been really pretty cool. Most people are nice and help me get through the day. I’m now inspired to write my own children’s book encouraging kids to damage their eyesight; “Bats Know Where it’s AT.” Can someone help me find a publisher?
ByD. Byrneon February 7, 2015
I found this book to be unhelpful. It does’t list places where I can expose my child to a deadly disease.
Jane Roper19 hours ago
Try California! We’ve got some raging cases going on. And make sure you hang out in the airport for a while (and take several, crowded flights home) once your child has a nice, nasty case going on.
By Carl Taiton February 7, 2015

I bought the $3 Kindle version of this atrocity just so I could quote some of the kookier passages. Believe me, the book is even worse than you might expect. Here are some short excerpts:

“For most children it is a good thing to get measles,” Tina’s mother reassured her. “Many wise people believe measles make the body stronger and more mature for the future,” she concluded. [This is accompanied by a drawing of a vibrant post-measles Tina flexing her biceps.]

“Can we go and visit Melanie so I can catch her measles?” Tina asked. “That sounds like a great idea,” laughed Tina’s mother. [And off they go to visit happy, happy Melanie.]

“I read that if your body has plenty of vitamin A, you won’t get measles.” [More wisdom from Tina’s omniscient mother.]

“Jared did get the measles. Tina was not surprised really as she knew he ate so many sweets and chips every day.” [Tina’s mother has uncovered the secret that’s been hidden so long by Big Pharma: measles is *really* caused by sugar and carbs. I wonder if Tina’s mom recommends a good session with all-natural leeches to help drain out those poisons.]

The best thing about this book is the number of people who are laughing at it. With good reason.

So what exactly is marvellous about measles?

Nothing! Vaccinate your kids.