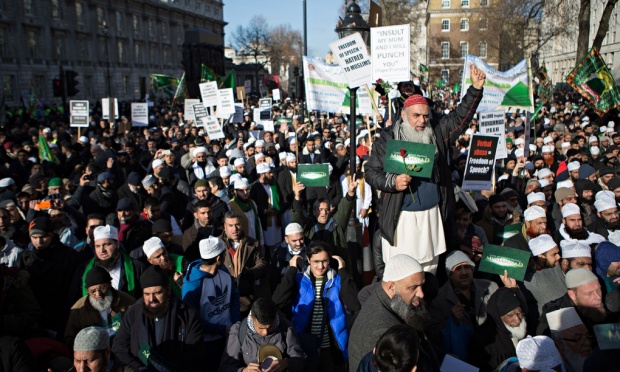 So here is a small little contrast between those that simply do not get it, and are in effect enslaved to absurd ideas to such a degree that they end up more or less self-declaring as complete twits (or worse).

Those that don’t get it

The Guardian reports that thousands of Muslims gathered in central London to protest against a cartoon that offended them. The fact that on a daily basis Muslims are being slaughtered, and that includes the Muslim policeman guarding the Charlie Hebdo office, does not appears to be a concern at all – that is quite frankly absurd.

… er no, the real affront is the rather stunning silence when faced with Islamic violence, murder and intolerance, and the fact that such issues are not their number one concern is the real problem, they are protesting about the wrong things, because they simply don’t grasp what really matters. As one commenter put it …

This protest is wrong on so many levels.

It’s people not protesting about the sexual gangs in places like Rotherham, the barbaric killings of the people in France, the beheadings, burning someone to death in a locked cage…. or all the other atrocities that are going on in the Middle East. Nope, they protest over cartoons. That’s so warped!

Then there is this ‘veiled’ sort of threat: if you don’t insult our prophet, we can live all harmoniously.

Those that do get it

I am going to be very clear here, despite my opposition to most if not all states in the Middle east including the one I was born at (Iraq) “the cradle of civilization” I care about people there.

Recently I read a story of a small grocery store owner who was killed in Baghdad (my home city) and he has 3 young daughters.

I really didn’t care about whether the man was a Muslim, Christian, Jew or an Atheist.

The family lost a person who was working hard to support them.

These are the people I really care about.

I don’t care about governments or nation states.

Now that nails it, and there is a decent human being who truly does get it, and I salute him for that stance.

The crux of the matter is this … religious beliefs do not have rights and so cannot demand or insist that we conform or even respect them. In stark contrast, people, regardless of their specific beliefs or non-belief, do have rights.