Vaccination not only works, but it works well. Smallpox is gone, and Polio, Tetanus, and Measles, have all been greatly restricted. Nobody would seriously advocate a return to the 18th century, a time when as many as 400,000 europeans died each and every year of smallpox alone, and yet the arise of an anti-vaccine movement that decries this highly effective medical intervention as evil incarnate is a stance that would bring us back there.

Will we ever seen an end to such lunacy?

First, let’s take a brief look at what happens when vaccination rates drop. 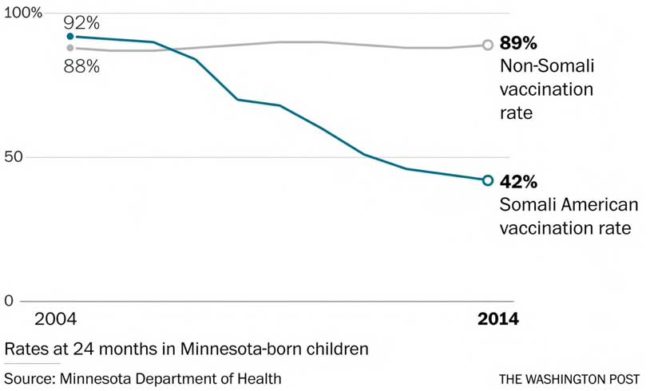 … and the inevitable then happened, Minnesota had its worst ever measles outbreak within the Somali community. Additionally, as rather blatant in-your-face proof that vaccine usage is not related to Autism in any way, the rather sharp decline in vaccines did not lead to a similar decline in Autism and so that alone clearly reveals that they had been lied to and deceived by anti-vaccine activists when advised that it did.

Perhaps you wonder why this happened. Their deepest fears were exploited. As explained via a Washington Post article last May …

The young mother started getting advice early on from friends in the close-knit Somali immigrant community here. Don’t let your children get the vaccine for measles, mumps and rubella – it causes autism, they said.

Suaado Salah listened. And this spring, her three-year-old boy and 18-month-old girl contracted measles in Minnesota’s largest outbreak of the highly infectious and potentially deadly disease in nearly three decades.

… Growing up in Somalia, she’d had measles as a child. A sister died of the disease at age three.

Salah no longer believes that the MMR vaccine triggers autism, a discredited theory that spread rapidly through the local Somali community, fanned by meetings organized by anti-vaccine groups.

The activists repeatedly invited Andrew Wakefield, the founder of the modern anti-vaccine movement, to talk to worried parents.

… Wakefield, a British activist who now lives in Texas, visited Minneapolis at least three times in 2010 and 2011 to meet privately with Somali parents of autistic children, according to local anti-vaccine activists.

Wakefield’s prominence stems from a 1998 study he authored that claimed to show a link between the vaccine and autism.

The study was later identified as fraudulent and was retracted by the medical journal that published it, and his medical license was revoked.

Indeed yes, Mr Wakefield has a lot of answer for, he quite literally has a body count associated with his stance. His work is an “elaborate fraud”, and that is not simply an opinion.

There is a new study led by doctors from Emory University in Atlanta that maps out the trend of vaccine refusal.

Here is where things stand … 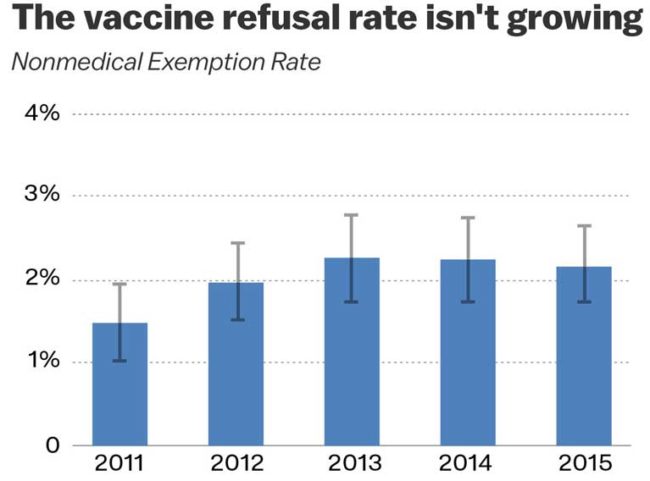 Their observation is as follows …

Several states such as California and also Vermont have enacted legislation that has removed the option of opting out of vaccinations for religious or philosophical reasons. That however is just a beginning, legislation in other states is starting to go the same direction as well.

So what is the political landscape like for vaccines?

Trump himself might indeed be a rather vocal vaccine denier. He has, when asked, expressed the myth that vaccines cause autism, but support for this idea has not gone mainstream within the political arena. As explained by an article in Vox …

Many of the people Trump has installed in key health agencies — Francis Collins at the National Institutes of Health, Scott Gottlieb at the Food and Drug Administration, Brenda Fitzgerald at the Centers for Disease Control — are pro-vaccine, and vociferously so.

Now that also is a great piece of news.

What is perhaps inevitable is that there is a balance that has been reached between anti-vaccine claims and reality.

One social force in play is that the Anti-vaccine advocates will continue to pump out myths that have no scientific basis as supposed fact. Some will believe them and so will refuse vaccines for their kids. It is a stance that will continue to gain traction because it taps into a deep emotional river – the bond between partner and their children. This also stance has consequences and so we will continue to see the emergence of outbreaks such as the Minnesota measles one earlier this year. News of such outbreaks act as a very stark in-you-face demonstration that such myths come with a social price tag, and that will act as a counter force.

Additionally, with the removal of the opt-out by some states there is a social pressure to not opt out. Given a choice, it is perhaps natural for the fear factor to motivate some to take what they perceive to be the path of least risk and opt-out. If however such an opt-out ceases to be an option for non-medical reasons, then only the most determined unreasonable fanatics, a tiny fringe, will still refuse. The vast majority will happily vaccinate.

Bottom Line: It looks like 2013 was the high water mark for the anti-vaccine movement.

4 thoughts on “Anti-vaccine rates may finally be declining”