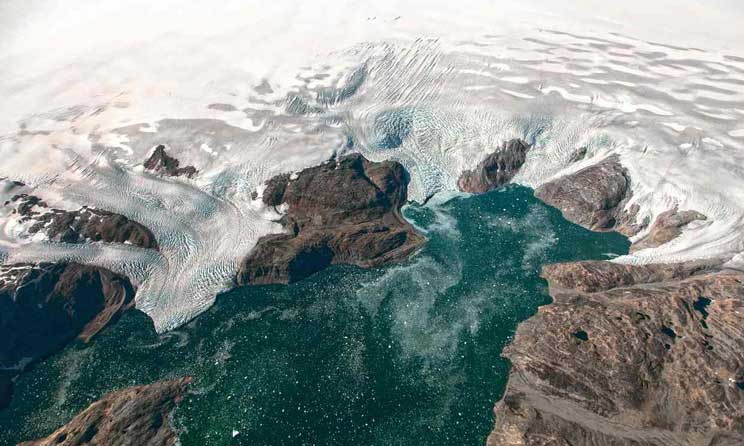 It has been known for some time that the annual ice loss during the seasonal melt in Greenland was large, but new calculations revel that it is even bigger than previously thought.

The challenge of working out just how big that ice loss is has lacked data because nobody is there on the ground at key sites taking measurements. One solution to answering this is to examine the Glacial isostatic adjustment (GIA).

If you pile a lot of ice on top of land, then the weight will press down and compress the underlying land (akin to you lying down on a mattress). Once that ice melts then the land will respond to the ice loss and rise up again. This can be measured via Global Positioning System stations.

Having used this Global Positioning system over Greenland, and utilising the average mantle viscosity for the globe, it was possible to calculate the annual ice loss.

A new study now reveals that something rather important was missed.

South East Greenland previously passed over the Iceland hot spot (roughly about 40m years ago), This hot spot would have caused a warmer than average upper mantle with reduced viscosity and that will significantly affect present-day GIA rates. Because previous Greenland GIA models did not consider low viscosity beneath the southern Greenland lithosphere, they under-predicted the GIA rates.

They had underestimated the sea ice loss by about 20 gigatons/year. That’s roughly an increase of 8% of the previous estimates.

Additionally, a warmer upper mantle in southeast Greenland (and presumably along the past hot spot track) may also have a large influence on ice sheet or glacier flow dynamics, because a greater geothermal heat flux at the base of an ice mass will affect its internal thermal regime and the presence of basal melt water.

“The fact that we are seeing such a similarity of past and present behaviour suggests we could lose ice in these regions for decades into the future,” said Prof Jonathan Bamber, at the University of Bristol, UK, and one of the international team of scientists who carried out the new study, published in Science Advances.

Bamber said the presence of a long-term trend does not mean global warming is not a crucial factor: “One thing we can be certain of is that a warmer atmosphere and a warmer ocean is only going to accelerate this trend.”

“The headlines of climate change and melting polar ice are not going to change,” said Dr Christopher Harig, at the University of Arizona, who was not involved in the study. “The new research happening now really speaks to the question: ‘How fast or how much ice can or will melt by the end of the century?’ As we understand more the complexity of the ice sheets, these estimates have tended to go up. In my mind, the time for urgency about climate change [action] really arrived years ago, and it’s past time our policy reflected that urgency.”

Dr Pippa Whitehouse, at the University of Durham and also not involved in the new research, said: “This study highlights the powerful insight that GPS measurements can give into past and present ice loss. Using such measurements, this study demonstrates that some of the highest rates of ice loss across Greenland – both in the past and at present – are found in areas where the ice sheet flows directly into the ocean, making it dangerously susceptible to future warming in both the atmosphere and the ocean.”

The paper, entitled “Geodetic measurements reveal similarities between post–Last Glacial Maximum and present-day mass loss from the Greenland ice sheet“, has been published in Science Advances and is available online (no paywall) – [Science Advances  21 Sep 2016: Vol. 2, no. 9, e160093, DOI: 10.1126/sciadv.1600931]

It is open access, so you can simply click and proceed to read without any paywall popping up.