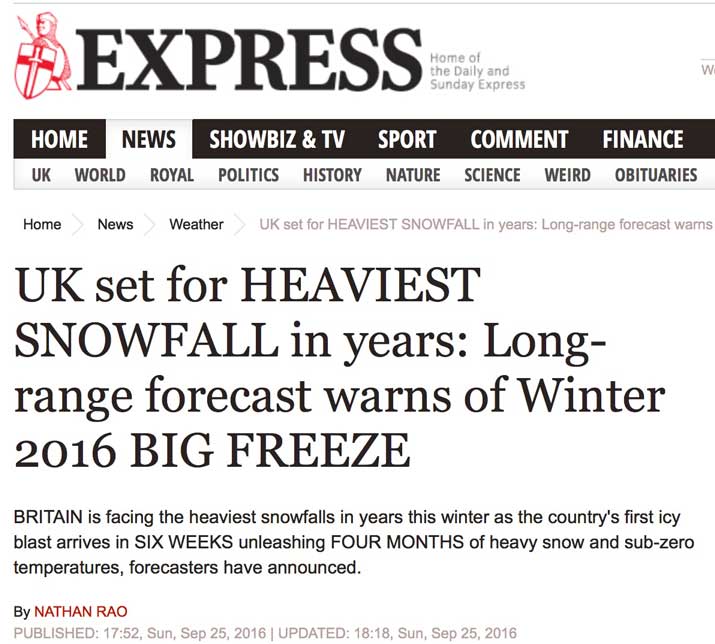 Almost every Spring and Autumn for the past couple of years the UK’s Daily Express has run stories such as the above claiming that the season ahead is about to hit extremes. Instead of seeking guidance from a real meteorologist, their source is weather eccentric James Madden, forecaster for his one-man company Exacta Weather.

Link to the latest story here (see picture above for illustration)

Yes, Globally it was, but not in the UK.

So who is James Madden and what forecasting model does Exacta actually utilise?

Google his name and Exacta and you will quickly discover the Exacta website where you discover just how supposedly wonderfully accurate Exacta is, but strangely enough, not very much information on exactly how such forecasts are compiled.

This should set your skeptic alarm bell off, because if you go to the website of any reputable meteorological organisation not only do you find the forecast, but you can also discover the details about the methodology deployed.

If you do persist and dig a bit then you discover that he is basically using sunspots to derive his forecasts.

Mr Madden has a bit of a reputation in the forecasting arena that is really not helped by being pandered to by tabloids such as the Express. Despite his claims, none of it is accurate … ever … (except in the sense of a broken clock being right twice a day). He also does not do dull, and happily issues forecasts about extremes – blistering heatwaves in summer, frozen arctic winters – and that makes a great tabloid headline, hence they love him and bestow the title of “expert” as a reward.

I’ve written about him before. Last time was back in 2011.

So is Mr Madden a Meteorologist?

Nope, he has no qualifications at all that are associated with Meteorology.

People in the UK do talk about the weather and so I have no problem with Mr Madden cobbling up his forecasts using whatever methodology he feels is appropriate. My primary issue is that the Express hypes it all up by calling him an “expert”, and running with it as if he was a generally well-respected and recognised forecaster with a credible reputation.

It is of course credible that variations in solar activity may indeed influence the climate on Planet Earth, but to make the leap and start churning out regional and very local “accurate” forecasts for one tiny nation over a specific season on the basis of the absence or presence of sun spots is quite frankly absurd nonsense. You might perhaps think that getting it consistently and persistently wrong might generate a small bit of insight, but apparently not.

Side Note: It is a myth that climate change has been caused by an increase in solar radiation. Over the last 35 years of global warming, the sun and climate have been moving in opposite directions. An analysis of solar trends concluded that the sun has actually contributed a slight cooling influence in recent decades

Mr Madden does have a reputation, and it is not a good one.

There is an entire Facebook page devoted to his forecasts, no not his official one that touts how wonderfully accurate he is and is purged of any criticism, but instead the one that debates his forecasts and basically points out that he gets it wrong almost every single time.

Madden has two Armageddon heat settings. Ice death blast, or skin peeling sun death rays. No in between average weather for him,

There is also a blog run by a UK based Meteorologist who has mused at times about Mr Madden, and also very wisely opts to remain anonymous. Last November he was writing about just how wrong Mr Madden was …

Earlier this year, I wasted many a minute collating and verifying weather stories printed in the Express newspaper. The aim of my news gathering antics was to concoct a humorous overview of how consistently forecasting the same apocalyptic weather would verify eventually. Of course, in the case of the Express claims of the worst snow in history, it didn’t verify, not in the slightest, and we endured one of the mildest, wettest winters in living memory.

The bulk of the material for the Express’s extreme meteorological misery was pumped from “Exacta Weather”, a one-man company claiming unrivaled success in long range forecasting. At winter’s end, I even bungled together Exacta’s weather graphics for the entire winter, ultimately proving how the repetitive prediction of snow in one of the mildest winter’s we’ve witnessed, can make a man look ridiculous.

In some respects, it is funny and entertaining, but there is also a serious point as well …

Should it be right, or even legal, that one can set up a weather “company” with zero meteorological training or credentials, make completely unsubstantiated claims about your accuracy and forecasting methods, and enjoy your forecasts published in the mainstream media for all to see? Should hard-working, legitimate weather companies have their industry dragged through the mud (waist-deep in the case of last winter) so that rogue traders can publicise their name and make extra cash for the tabloids?

The fact that the Express continues to publish his forecasts does not in any way lend him any credibility, instead it blows theirs completely. However, to be fair, being honest, accurate and truthful was never really something that The Express has striven to achieve.

Mr Madden most probably sincerely believes that he is indeed an expert and hence is probably an almost classical example of the Dunning–Kruger effect. Enjoying a constant stream of tabloid articles in which he is labelled an “expert” really does nothing but reenforce his belief in himself and his forecasting skills.

His company, Exacta Weather, is perhaps also his only income, so coming to terms with the observation that his meteorological methodology does not work is also something that would be rather challenging for him. My prediction is that criticism such as this will be dismissed with a bit of eye-rolling on his part because he will be quite sure that it really does work, and also the Express will continue to utilise his services because they clearly don’t give a toss about accuracy.

So what do you reckon the chances are that we here in the UK will be awash with snow in six weeks, and that this show will then persist for four months?

Hint: so far 2016 has been the warmest year on record globally.

The UK’s Met Office does have a long range forecast that runs to the end of October. It lays it out like this (as of 27th Sep, they don’t update it until lunchtime, so yesterday’s is still up) …

There is currently low confidence for the forecast during the second half of October, however the most likely scenario is a continuation of the more changeable conditions. The north and northwest is likely to see the most unsettled weather, with strong winds and showers or longer spells of rain, intermixed with some drier interludes. Further south and southeast there is a greater likelihood of drier, brighter weather with a low possibility of more prolonged settled spells here. Temperatures will vary through the period, but probably averaging out slight above average for the time of year, with an increasing risk of overnight frost in the more settled spells.

In other words, there is no sign of Mr Madden’s Snowmageddon blizzards.

4 thoughts on “Weird Weather Forecasts via the Daily Express”