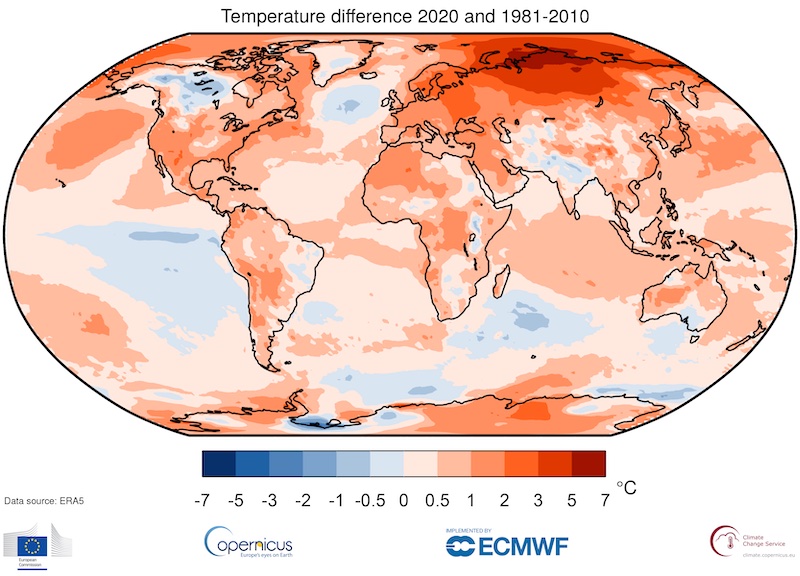 The numbers are starting to come in. The EU’s Copernicus have issued a press release that announces that their data for 2020 reveals the following …

Side Note: If you are wondering why the European Union’s Climate Change Service (C3S) is named Copernicus, it is perhaps worth remembering that Nicolaus Copernicus is the guy who rater famously deduced the heliocentric model (the idea that the earth revolves around the sun) via observational data in the early 1500’s.

The Copernicus Atmosphere Monitoring Service (CAMS), C3S reports that CO2 concentrations in the atmosphere have continued to rise at a rate of approximately 2.3 ppm/year in 2020 reaching a maximum of 413 ppm during May 2020.

Parts of the Arctic and northern Siberia saw some of the largest annual temperature deviations from average in 2020, with a large region seeing deviations of as much as 3°C and in some locations even over 6°C for the year as a whole. On a monthly basis, the largest positive temperature anomalies for the region repeatedly reached more than 8°C. Western Siberia experienced an exceptionally warm winter and spring, a pattern also seen over summer and autumn in the Siberian Arctic and over much of the Arctic Ocean.

Furthermore, the wildfire season was unusually active in this region, with fires first detected in May, continuing throughout summer and well into autumn. As a result, poleward of the Arctic Circle, fires released a record amount of 244 megatonnes of carbon dioxide in 2020, over a third more than the 2019 record. During the second half of the year, Arctic sea ice was significantly lower than average for the time of the year with July and October seeing the lowest sea ice extent on record for the respective month.

In general, the Northern Hemisphere experienced above average temperatures for the year, apart from a region over the central North Atlantic. In contrast, parts of the Southern Hemisphere saw below average temperatures, most notably over the eastern equatorial Pacific, associated with the cooler La Niña conditions developing during the second half of the year. It is notable that 2020 matches the 2016 record despite a cooling La Niña, whereas 2016 was a record year that began with a strong warming El Niño event.

“2020 stands out for its exceptional warmth in the Arctic and a record number of tropical storms in the North Atlantic. It is no surprise that the last decade was the warmest on record, and is yet another reminder of the urgency of ambitious emissions reductions to prevent adverse climate impacts in the future.“

Processed time series data are available to download below the respective graphic. Spatial data for the temperature anomaly map can be downloaded from the Climate Data Store (CDS – cds.climate.copernicus.eu). Data from Copernicus are subject to the Licence to Use Copernicus Products (v 1.2). Temperature datasets from other providers, which are included here for the purpose of comparison, are subject to other licenses, please check with the respective provider.

The Monthly Climate Bulletin for December can be accessed here: https://climate.copernicus.eu/monthly-climate-bulletins