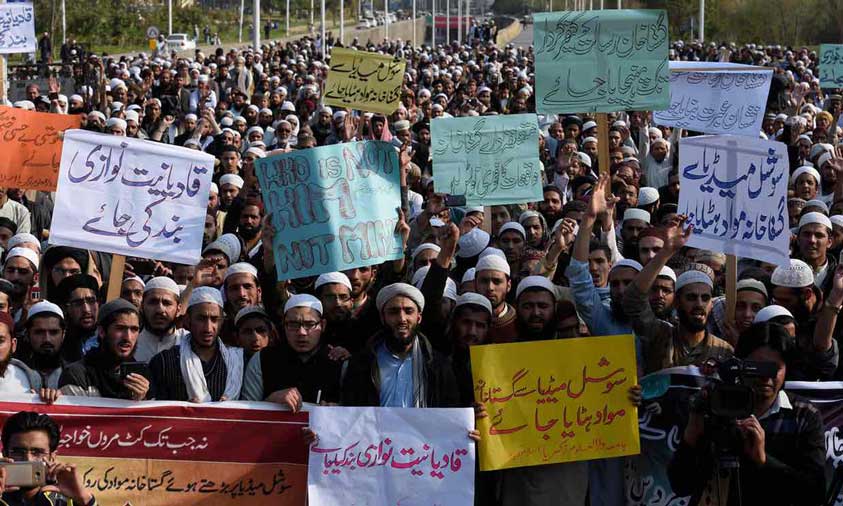 Blasphemers are now apparently being targeted by the Pakistani government …

Pakistan has asked Facebook and Twitter to help identify Pakistanis suspected of blasphemy so it can prosecute them or pursue their extradition.

Under the country’s strict blasphemy laws, anyone found to have insulted Islam or the prophet Muhammad can be sentenced to death.

The interior minister, Chaudhry Nisar Ali Khan, said an official in Pakistan’s Washington embassy had approached the two social media companies in an effort to identify Pakistanis, either within the country or abroad, who recently shared material deemed offensive to Islam.

He said Pakistani authorities had identified 11 people for questioning over alleged blasphemy and would seek the extradition of anyone living abroad.

When faced with a threat of being completely blocked, Facebook did agree to send a delegation and engage in dialog. If however Facebook actually assisted Pakistan with the identification of people and that resulted in people being jailed for simply criticising daft irrational beliefs, then the uproar outside Pakistan would in effect decimate Facebook. So no, FB will not be doing that.

Who exactly is the victim?

Criminal proceedings take place when somebody has become the victim of a crime. Rather obviously crimes such as theft or murder have a victim who has been wronged, but when it comes to blasphemy, then who exactly is the victim?

Yes, individuals do hold specific beliefs, and yes their feelings might indeed be hurt if somebody mocked that belief, but why does criticism or rejection of a religious idea inspire people to demand that the source must be put to death, yet in other contexts a similar degree of criticism is accepted as normal, for example politics. Does any democratically elected government seriously suggest that their opponents or the media should be slaughtered?

Make no mistake here, I’m not exaggerating. The official penalty for “blasphemy” in Pakistan is not a fine, nor a slap on the wrist, it is death.

Pakistan’s Penal Code § 295C … Use of derogatory remarks, spoken, written, directly or indirectly, etc. defiles the name of Muhammad (S.A.W). 1986. Mandatory Death and fine (Feb. 1990[16]) Trial must take place in a Court of Session with a Muslim judge presiding.[17]

In other words, if I put into writing the observation that Muhammad was a child molesting peadophile, (as a 50 year old he took and married a 6 year old child), and a warlord thief who used religion to gain power, (the wikipedia article on it all tactfully calls these raids “expeditions”), then I qualify for the death penalty in Pakistan. The fact that both of those observations are historical, accurate, and can be verified via Islamic sources would not even be considered. Simply pointing out these rather embarrassing Islamic sourced facts is all I need to merit death.

What exactly is and is not Blasphemy

What is also interesting to observe is what is and is not deemed to be “blasphemy”.

Mainstream Christian belief would assert that Jesus is a god and if questioned, they would reject anything and everything ever said by Mohammed. In the eyes of Islam that is all blasphemy, and yet this reality is generally tolerated in Pakistan to some degree. Many beliefs, if not most, do have some concept of blasphemy, and so if you attempted to actually create and then enforce a universal blasphemy law then everybody goes to jail. There would be no exceptions, because each and every single belief would be deemed blasphemy in the eyes of other beliefs.

This of course is the mess you get into when you seriously embrace the idea that ideas have rights.

I should perhaps clarify a small point here. There are things that are clearly wrong. If you are targeting people simply because they hold a specific religious belief, then we are not talking about blasphemy. For example, targeting people for being Jewish. Another illustration would perhaps be factions in Northern Ireland targeting people for being either Catholic or Protestant. Perhaps an example far more familiar is the US introducing travel bans that are driven by a desire to target people for simply having a Muslim heritage. None of that is blasphemy and all of it is a breach of basic human rights.

When we talk about Blasphemy, what we are specifically referring to is criticism or mockery of a religious idea itself and not the targeting of individuals who hold such beliefs.

That is a rather important distinction.

General Comment 34 on the International Covenant on Civil and Political Rights (ICCPR) 1976, concerning freedoms of opinion and expression. Paragraph 48 states:

Prohibitions of displays of lack of respect for a religion or other belief system, including blasphemy laws, are incompatible with the Covenant, except in the specific circumstances envisaged in article 20, paragraph 2, of the Covenant. Such prohibitions must also comply with the strict requirements of article 19, paragraph 3, as well as such articles as 2, 5, 17, 18 and 26. Thus, for instance, it would be impermissible for any such laws to discriminate in favor of or against one or certain religions or belief systems, or their adherents over another, or religious believers over non-believers. Nor would it be permissible for such prohibitions to be used to prevent or punish criticism of religious leaders or commentary on religious doctrine and tenets of faith.

There are specific nations such a Pakistan, and others, that ignore this.

For a  complete breakdown, nation by nation, you can find a list here of all the various blasphemy laws.

Why do such laws exist?

There are a few words that perhaps sum up the real motives, namely “Insecurity” and “Control”.

Beliefs generally tend to have no evidence but instead appeal to emotions and cultural traditions. Criticism of specific religious ideas, especially by competing ideas, introduces the possibility that some other belief might move in and take over. For a belief to survive and thrive it needs a defence mechanism against such alternatives. The beliefs that thrive today do so because they have been able to defend themselves against alternatives through the use of fear and intimidation. The concept of blasphemy is an example of this. Read the religious text of any of the prevailing beliefs, the Bible, the Quran,  and you find strict directives against anybody advocating any competing alternative as wicked and evil. Even doubting and asking questions or seeking evidence is considered morally dubious.

Blasphemy today tends to manifest itself as the dominant belief oppressing any minority so that its dominant position can be maintained. Beliefs have perhaps been naturally selected to be like this.

How should we respond?

You might be tempted to respond rationally with reason and well honed arguments,  but such arguments gain no traction. This is because the driving forced behind much of it is emotional.

Perhaps a better alternative is to attack the idea itself with satire and parody, and mock the absurdness of it all …