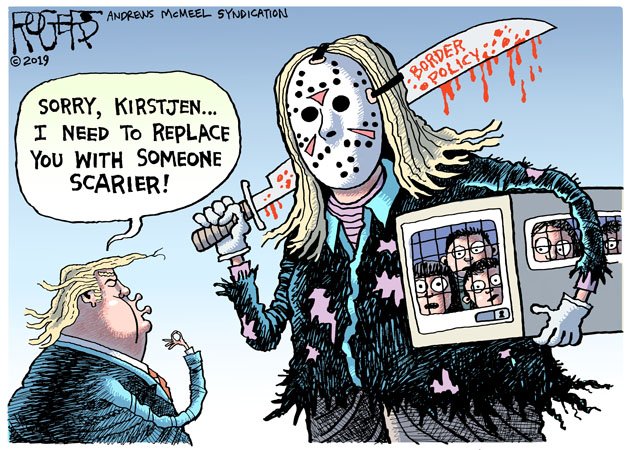 We live in a truly weird time where we observe right-wing religious fundamentalists rallying behind and supporting an individual who has cranked up the dials that are marked “Intolerance”, “dishonest”, “obnoxious”, and “zero empathy” to full volume.

So what crazy weird claims have popped up from the Trump loving sycophants during the last 7 days?

Witches, Demons, and The Occult

“political occultist expert” Cory Daniel, who was on hand to explain the occult symbolism that was supposedly behind the recent murder of rapper Nipsey Hussle.

Daniel, who has previously claimed that Zionists use pedophilia to blackmail members of Congress, that the Super Bowl halftime show was an occult ritual, and that the massacre of Muslims in New Zealand was part of an Illuminati plot to “take white people down,” found great significance in the fact that the suspect who shot Hussle reportedly escaped in a white Chevy Cruze.

“Nipsey Hussle was sacrificed, people,” Daniel said. “This was a public ritual sacrifice.”

Daniel claimed that the fact that the media repeatedly shared the car’s description and license plate number was part of a ritualistic “incantation.”

(How does one qualify to become an “Occult Expert”, who offers certification in that?)

“America is under a corporate witchcraft attack. It’s a spell. We are numb to news, incapable of outrage. The Left has brainwashed its audience in counterfeit grievances and perverted justice. “

(“corporate witches”, how exactly does that work?)

Racism In America Is Not Real, But Discrimination Against Trump Supporters Is

On Friday night’s episode of his “YourVoice America” program, ardent pro-Trump commentator and right-wing conspiracy theorist Bill Mitchell insisted, once again, that racism is not a problem in America while his guest, one time “The Apprentice” contestant Stephanie Myers, declared that Trump supporters are the ones who are really facing discrimination in this country.

After declaring that every Trump supporter should come together for a “National MAGA Hat Day” in which they wear their red “Make America Great Again” hats in public in order to upset liberals, Mitchell complained that MAGA hats are treated as “a symbol of racism”

Chris McDonald and James R. asserted that President Trump will lose his re-election bid in 2020 if he doesn’t punish his enemies like Barack Obama and Hillary Clinton because Trump supporters will be too busy waging a civil war and fighting in the streets to bother to vote.

Andrew Wommack claims that PBS is coming to his Charis Bible College to film a program with him and John Tesh discussing Tesh’s supposedly miraculous healing from cancer.

(If you are expecting evidence or proof for this “miracle”, I’d recommend not holding your breath)

Just how extreme can they get?

A Texas house committee heard testimony this week on a bill that would allow women who have abortions to be convicted of homicide and executed. The bill’s sponsor, state Rep. Tony Tinderholt, told the Texas Observer when he introduced the bill in 2017 that it would make women “more personally responsible” about having sex.

This horrifying news reminds us that when Donald Trump was a presidential candidate, he said in response to a reporter’s question that once abortion is criminalized, women who have an abortion could face legal punishment. Immediately, anti-choice leaders mounted an intense public relations campaign denying that any “pro-life” activists have a desire to punish women—part of their strategy to portray anti-choice groups as pro-women and not just pro-fetus. As I pointed out at the time, they were lying—a fact confirmed with striking clarity by this week’s news from Texas.

(Pro life means “we will execute you”)

Not everybody goes as far as “death”, we also had Dave Daubenmire advocating imposing physical punishments, such as caning, for women who get abortions.

(These folks aren’t just “Taliban lite”, then are quite literally doing exactly the same)

“the battle in America has nothing to do with Republican versus Democrat. Rather than political it is the all-encompassing struggle between Biblical Christianity and the false religion of Secularism.”

Oh and least you wonder why he is getting all this flack, it’s basically because of this …

Just how Utterly Obnoxious can the right-wing religious be?

Well, here are a few more samples that perhaps give you an answer to that, and remember this is all stuff that popped up in the news cycle during the last 7 days …

Why is it like this, why are so many so willing to embrace intolerance, bad ideas, and outright fiction as “truth”?

The answer is that all humans, without exception, have cognitive biases that can kick in and completely befuddle and muddle our ability to think rationally.

What can we practically do, how can we rise above all of this?