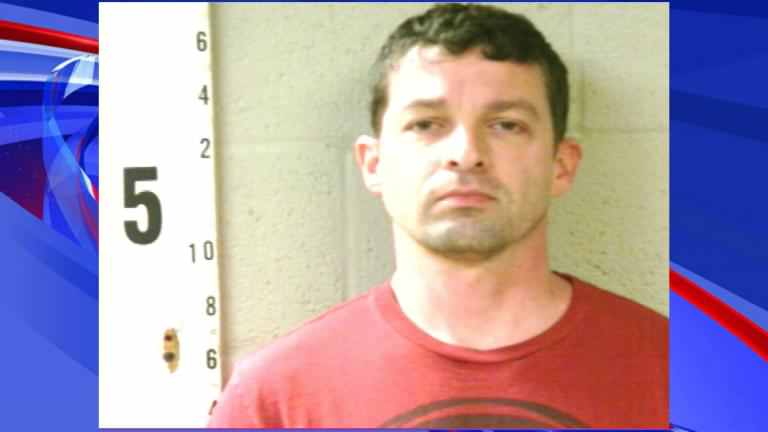 A popular religious claim is that if you invite Jesus into your heart, he will fill you with the Holy Spirit and so you become “Born Again”. All your sins are forgiven and you are supposedly a new creation. Here is what the bible claims …

Therefore if any man be in Christ, he is a new creature: old things are passed away; behold, all things are become new. – 2 Cor 5:17

People who deeply believe will attempt to sell the idea by trumpeting personal life experiences, and often those that do not believe are chastised for not believing with the suggestion that without faith it is not actually possible to be moral.

It is also possible to step back and to look at this objectively. If you scale things up and check the statistics than it should be possible, if the claim was true, to detect a measurable difference between those who assert this and those that don’t. What you actually find is that the lives of those that claim to be “new creatures” are not in fact any different than the lives of those who do not assert that claim.

What you will also find is that nestled amongst the supposedly elect are some abhorrent individuals who have done some truly despicable things.

Are all those who believe rogues?

No of course not, most humans, regardless of their specific belief or lack of belief, are decent human beings. The point is this – the observation that some of those that sincerely believe are also quite vile individuals lays waste to the claim of a supernaturally transformed life.

To illustrate this here are some news items that popped up within the news cycle during the past seven days. This is not a matter of scouring over many decades to find such examples, it is sadly way too common, so much so, that stuff like this pops up each and every week.

Via David McaFee writing about this here … 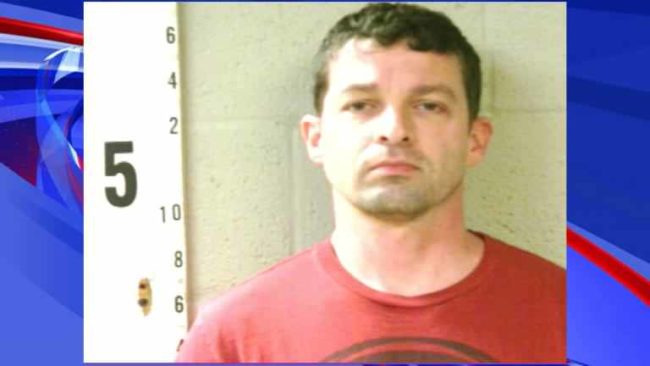 A pastor in Tennessee was arrested this week after being charged with 47 charges related to sexual abuse of minors, including at least one victim under the age of 13.

Local authorities booked Ronnie Gorton, the former pastor of Awakening Church in Atoka, Tennessee, saying at least three people have accused him of molestation or rape. The charges include one count of rape, 16 counts of statutory rape by an authority figure, five counts of aggravated sexual battery (with a victim under the age of 13), and more.

More victims could still come forward, so charges could be added, according to Tipton County Sheriff Chief Deputy Billy Daugherty.

During their investigation, they learned that Atoka police were investigating Gorton after an underage boy accused Gorton of raping him. That incident allegedly took place at Gorton’s home just weeks earlier.

Daugherty said two more victims came forward after WREG’s initial story aired, bringing the total to three, but he said that might not be the final number.

“There could be more, potentially, victims and certainly if there are any victims that remain, we encourage them to come forward,” Daugherty said.

Gorton is also being charged with two counts of soliciting sexual exploitation of a minor, two counts of contributing to delinquency, and two counts of enticing a child to purchase alcoholic beverages.

Based on other charges he’s facing, it would appear he showed some of his victims pornography and bought alcohol for at least one.

This is a disturbing story as it is, but things look even worse after reading what Gorton’s neighbors said they saw at his house. They never suspected anything illegal, but they said they saw numerous young boys visit his home, often for extended periods.

If this had been an isolated incident and nothing like this had even been seen before then you might potentially be shocked. The fact that such stories pop up all the time means that when reading a story like this nobody is actually surprised by it.

We live in an age where the term “youth pastor” is a red flag.

Seth Dunn, a Christian writer at Pulpit & Pen, recently sat down with [Greg] Locke’s now-ex-wife Melissa and found out some incredibly devastating things about their married life. Like how he hit her more than once. Like how he shamed her for gaining weight after he had paid thousands of dollars for her weight-loss surgery. Like how he was emotionally abusive.

These aren’t just her words against his. She had the text messages to prove it. (She’s in blue.)

Surrounded by her employer and the caretakers of the women’s shelter at which she now resides, Melissa Locke tearfully told me her story. She and her caretakers also showed me hundreds of text messages between Greg and Melissa. The vitriol with which Greg Locke addressed his wife of 20 years in those text messages is unbecoming of any man, especially a Christian pastor. 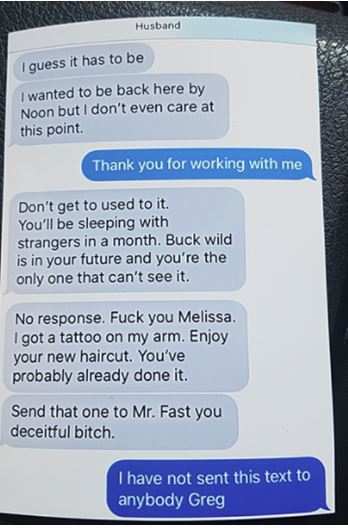 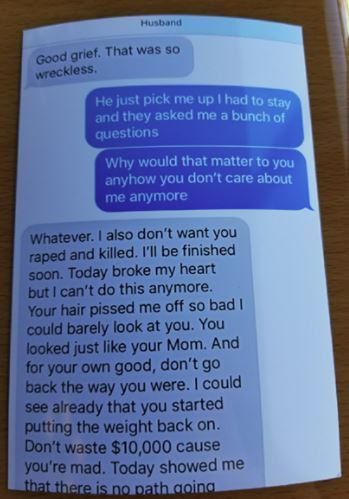 He swears. He calls her a “deceitful bitch.” He shames her for how she looks. And there are so many more messages where those came from.

This is… the language of a man who stood up on national TV, pointed his finger at a congregation of whom he is supposed to shepherd and said, “You, ladies and gentlemen, must get right with God.”

When news of the divorce was made public to his church earlier this year, The Christian Post spoke with him about it, and he said his wife was mentally ill and that was putting a strain on their relationship. (In other words, it was her fault.)

“She’s been in and out of mental health facilities but that is not where she is right now. She is at a place that helps ladies get on their feet again. The only reason why she is there is that the lady who runs it is like her grandmother, and so she’s there. She’s only there because of the comfort,” he said when first asked if his wife was in a shelter.

That, however, isn’t the story Dunn heard from her caretakers.

Greg Locke’s abandonment narrative has unraveled and his own actions prove the condition of his heart. Melissa’s caretakers are disgusted with Greg. I sat at the table with them while I interviewed Melissa. They have been appalled at his actions. Melissa has spent a total of seventeen days in the hospital with chest pains after receiving the harshest of contact from Greg.

When Dunn asked her about physical abuse, Melissa was reluctant at first to say anything, only offering up, “Just because somebody hits you, like two times, does not mean…” Yikes. She eventually gave a few more distressing details.

Though it was in the past, the hitting took place during Greg’s tenure as pastor of [Global Vision Bible Church]. Pastor Greg Locke hit his wife. Melissa also shared that Greg had spit in her face during the previous summer and broken her phone as she tried to calm him down during a fit of rage. Her busted phone was church-issued. In Greg Locke, GVBC has a pastor who abuses both church property (a phone) and God’s property (his wife)…

I wouldn’t have phrased it like that at the end, but you get the idea.

None of his actions, though, can be justified. It’s cruel. It’s abusive. It’s certainly not the way a moral leader ought to be acting when no one else is watching.

And nothing’s going to happen unless his congregation walks out on him because Locke runs an independent church. He and his buddy make all the decisions, take in all the money, and report to nobody. He’s not going to fire himself.

So unless there’s backlash among church members — requiring them to believe a woman’s testimony over their pastor’s lies — he’s going to keep preaching as if he has any right to tell them how to live a good wholesome life.

The essence of it is the story of an individual who quite literally appeared on national TV telling people that they need to “get right with God”, but is himself a screaming hypocrite.

Least you wonder, he also ticks all the usual boxes marked “intolerance”. If you don’t believe exactly what he believes then you are, in his eyes, evil incarnate …

He’s also someone who has equated homosexuality to bestiality and pedophilia, gone on anti-transgender tirades, and urged kids to fail in school if they have to learn about the basics of Islam.

Item 3 – A Pastor Assaulted Her When She Was 17; Watch Her React To His Pseudo-Apology

Andy Savage is the megachurch leader from Memphis who sexually assaulted a 17-year-old girl two decades ago when he was her youth pastor. The victim recently went publicwith her story, detailing how Savage drove her to a secluded area, whipped out his penis, and pressured her into giving him oral sex.

Or, as he now refers to the whole encounter, that “incident.”

Savage finally came clean to the entire Highpoint Church congregation in January — without going into any of the details — and the members gave him a standing ovationfor it. His colleagues subsequently announced that Savage would be taking a “leave of absence” while they investigated the situation. Savage is still on that leave.

In the meantime, his church took down the video of his “apology,” perhaps hoping no one would have evidence of that pathetic speech or the enthusiastic applause from the congregation. They must not realize that the internet doesn’t forget.

The New York Times, which saved a copy of the video before it was taken down, recently showed it to Jules Woodson, the woman Savage assaulted all those years ago.

Her commentary about how her church minimized the assault, her reaction to seeing Savage celebrated for his supposed courage, and her plea for churches to take sexual assault more seriously deserve a few minutes of your time.

The New York Times article, published on 9th March, ran with the title “I Was Assaulted. He Was Applauded.“.

This is in many respects very symbolic of the age of Trump – Voracious enthusiast Evangelical Support for an sexual assaulter, and outright dismissal of the victim.