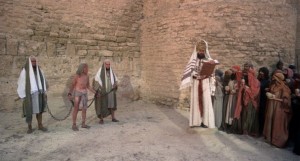 Since blogging yesterday about the on-going case in Pakistan of a child (Rimsha) being accused of Blasphemy (she did not, a complete wanker of a cleric planted the evidence), I’ve since noticed a small almost throw-away line. Towards the end of the following article in the Guardian about it all I found this …

Human rights groups say the blasphemy laws are often used to settle vendettas and property disputes. People have been sentenced to long jail terms on extremely weak evidence, some of which cannot even be examined in court for fear of repeating the alleged blasphemy.

Yes indeed, you get accused of blasphemy, but they can’t actually try you in court for fear of repeating the alleged blasphemy. It would appear that the legal process in Pakistan has taken a page directly out of Monty Python.

Even though they are gearing up for an election, this latest case is unlikely to lead to any fundamental reforms of Pakistan’s insane blasphemy laws. There have been attempts, last year two prominent politicians were assassinated by religious hardliners after speaking out against the law. Mumtaz Qadri, a former security guard gunned down his boss, Salman Taseer, the governor of the Punjab at the time, and is now regarded by many Pakistanis as a hero. What then followed was a denunciation by the majority of clerics and religious scholars (from all sects and groups) from mourning Taseer simply because he had acted as a decent honourable human being by publicly criticising the blasphemy laws and had also given his backing to a Christian woman who had been sentenced to death for the crime

The only truly appropriate response to such insanity is contempt and ridicule.