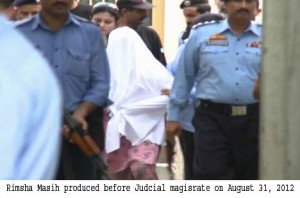 The spotlight of the world has been focused upon Pakistan and is showing everybody what really happens when you permit extreme religious nutters to dictate. Pictured here you can see Rimsha going to court in Islamabad.

So what has been going on?

So what is this latest news? Well apparently this news report has just come out …

(Reuters) – Pakistani authorities have arrested a Muslim cleric on allegations of framing a Christian girl who was arrested under the country’s controversial anti-blasphemy law, a police official said on Sunday.

Religious and secular groups worldwide have protested over the detention in August of Rimsha Masih, accused by Muslim neighbours of burning Islamic religious texts.

Police official Munir Hussain Jafri said a cleric was arrested after witnesses from Masih’s village on the edge of the capital Islamabad complained about his alleged actions.

“Witnesses complained that he had torn pages from a Koran and placed them in her bag which had burned papers,” Jafri told Reuters.

Curious to know who has been arrested? yep, its that clueless gobshite Khalid Jadoon (pictured), also known as Hafiz Mohammed Khalid Chishti, who was at the center of the initial storm and whipped up the crowd into a mob like frenzy that wanted to murder her. Yes, the same guy who turned up at the trial and demanded her death. Police say two of his colleagues gave statements that he added pages from the Qu’ran to strengthen the case against Rimsha Masih

Maulvi Zubair and two other assistants at a mosque near Rimsha’s house told police Chishti deliberately added pages from the Qu’ran to some charred refuse she was carrying.

Zubair is said to have objected at the time but Chishti insisted that it was the only way to get rid of Christians in the area.

Chishti has been outspoken about his dislike of the hundreds of Christian families who live in the area, even appearing on a popular national television show to complain that the noise made by Christian worshippers had disturbed Muslim residents.

He also welcomed the departure of most of the Christians from the area following the furore surrounding the arrest of Rimsha last month. With passions running high in the community – hundreds of people demonstrated outside her house, reportedly demanding the right to burn the young girl to death – most Christians fled the area.

“We are not upset the Christians have left and we will be pleased if they don’t come back,” Chishti told the Guardian on 18 August.

Tahir Naveed Chaudhry from the All Pakistan Minority Committee said Rimsha’s lawyers had always maintained the evidence was planted. “And now it is proved that the whole story was only designed to dislocate the Christian people,” he said. 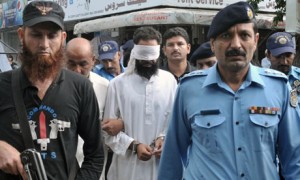 Will he be held accountable or will he be let off with a verbal telling off? This abhorrent excuse for a human being has generated a shit-storm that has rippled into thousands of lives, and stirred up a frenzy of hatred, not just against one girl but against an entire community. It should also be noted that burning a book should not be a crime that merits death, that in itself is utterly insane. Behind that is thinking that has reaped a harvest of violent intolerance. The Guardian writes about all this here …

Murderous attacks against members of the Shia sect are on the rise, particularly in the restive province of Baluchistan. On Saturday the death toll increased again, with seven people gunned down in two separate incidents near Quetta, the provincial capital.

Complaints by Hindus have also been mounting in recent months, with families claiming their daughters have been forcibly kidnapped, converted to Islam and then married to their abductors. Parties of Hindu pilgrims were recently detained at the border with India after the government feared they intended to claim asylum and never return.

Christians, as well as Muslims, have long suffered at the hands of the country’s blasphemy laws. For years rights campaigners have demonstrated how the laws, which ultimately stem from British colonial rule, have been used by individuals to settle scores and economic disputes, often on the basis of flimsy evidence.

Despite several ludicrous cases, including the jailing of people for allegedly touching a Qu’ran with dirty hands, public figures are loath to try to reform the system. Two politicians have been assassinated by religious hardliners for criticising the laws.

You see, this is not just about belief vs non-belief, nor is this Islam bashing (well OK it is, but they are doing it to themselves), but rather this is what happens when you empower one majority belief, in this instance Sunni Islam. From their viewpoint, only they are right, and for anything else it is open season because everything else is wrong. That not only includes non-believers, or other beliefs such as Christians and Hindus, but also includes other variations of Islam such as Shia or Ahmadiyya.

What will now be truly interesting is to see how this latest development plays out.