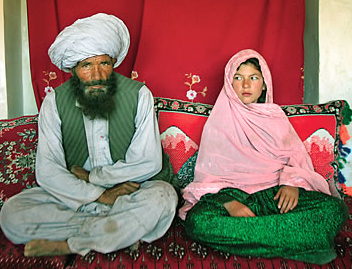 Today in Iraq you can not get married until you reach the age of 18, except of course if you have the support of your parents then that drops to 15. Well, it is all about to change if a new proposed bill passes and becomes law.

Children in Iraq could be legally married before the age of nine under sweeping legislation tabled on Tuesday that introduces new religious restrictions on women’s rights.

As almost its last act before elections at the end of the month, the Iraqi parliament looks likely to pass new marital rules for its majority Shia community with a draft law criticised by human rights activists as “legalised inquality”

There is a rather simple choice here, you can either pander to abhorrent religious beliefs rooted in a 7th Century mindset, or you can promote basic human rights. What you do not get to do is both, these are mutually exclusive.

What is wrong with this new draft legislation?


In other words, it reduces half the human population into sexual objects to be abused at the whim of men.

Islamic apologists often claim that Islam grants men and women equal rights, but the truth is rather different. When given an opportunity to demonstrate what the status of women really is within an Islamic theocracy then time after time the manner in which it manifests itself is abundantly clear, we need look no further than places such as Saudi Arabia, or Iran for examples of the end result. The apologist claims are rendered utterly meaningless when you consider the examples of what actually happens.

Now sadly the same fate potentially threatens to inflict misery in abundance upon Iraq as well.

Bad ideas, if pandered to and “respected”, will result in tragic consequences, so such thinking needs to be robustly criticised.

Right now this is a draft law and not yet a reality, so if there are enough sensible people in the mix then it will not happen, but alas it does look quite probable at this point in time.

“I hope they will put this to a vote in the parliament so it will be rejected by a majority. This law means humiliation for women and for Iraqis in general. It is a disaster not just for women but for children. These children shouldn’t be exposed to such an ugly situation. It shows that we are going backwards.“

– Safia al-Suhail, one of 82 female MPs in Iraq’s parliament

Oh and one more thought, if you should happen to bump into Mr Bush then you might be tempted to congratulate him for successfully bringing “freedom” such as this to Iraq, but to be brutally frank, the real root cause here is not the rather dubious US foreign policy which deserves rather a lot of criticism – the real motivation is a very bad religious idea that predates the very existence of the US.