I came across the following story by Faiza Mirza about her own forced conversion on Dawn.com and it touched my heart, so much so that I repeat it here … 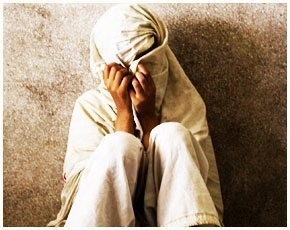 I grew up in fear – every face around me depicted nothing but fear. I am sure that the first expression on my parent’s face on my birth as a female child born to Hindu parents living in Kandhkot would have been that of fear also. Why did I bring so much fear into the lives of my parents? I grew up always wondering what is it about me that continues to terrify. But I always drew a blank. How naïve I was.

Before I knew it, the time to attend school had arrived. School was comfortable; however, there were times when I felt like an outsider, finding it difficult to gel in with rest of the majority. Perhaps the snide remarks and incidents of discrimination led me to believe that I am not one of ‘them’. Of those incidents, I still vividly remember no one eating with me and refusing to sip from the cup I drank from.

Home wasn’t very different either. My mother asked questions about my life at school and otherwise looking for answers that would somehow relinquish her from the unknown fear. Afraid to disappoint her, I realised very early in my life that my mother could not be my confidant.

Growing up was not easy.

And then it happened. The fears of my mother and many Hindu mothers like her materialised. I went out to one of the largest markets of Kandhkot and was abducted by a man I knew very well. He was none other than the guard who was responsible for safeguarding our temples.

Knowing his face well prompted me to sit with him in his car without protest, however, instead of taking me to my house he turned to an alley that I wasn’t too familiar with. Scared and unsure about what lay ahead I started screaming just to hear my abductor scream louder and threaten me. Astonished and unable to comprehend the gravity of the situation I sat still until it was time to step out of the car to a small house which looked abandoned.

We entered the house to find a large room devoid of any furniture and other bearings except for a carpet that covered the floor. I was made to sit down on the floor.

Uncertain about what was going to happen to me; my mind raced with thoughts of the recent news of the abductions and forced conversions of Hindu girls. I sat there shuddering. The realisation struck me and I could see my entire life in front of me in kaleidoscope. My mother’s fears, my father’s warnings, the alienation I felt, the yearning to be a part of the circle of friends, the search for a confidant, a friend.

My worst fears were reaffirmed when a man wearing a turban entered the room to teach me about a religion which I grew up hearing about, however, felt no urge to practise or embrace. He kept sermonising me for hours but was unable to get me to listen to him, realising that he left asking me to ponder about the true religion.

His departure did not ignite any fire for eternal glory inside me but only made me wonder why did my parents not relocate to another country when they had the chance to do so? Why did they continue to live in fear waiting for the inevitable to happen instead of making a move to safer pastures? And, what made me think that I am any different from countless girls who are forced to change their faith?

Each passing day appeared to be more and more surreal. The ritual of preaching continued for days, I lost track. Eventually, when preaching did not do the trick, my abductor threatened me.

The routine ranging from threats to persuasion and from glorifying the paradise to the wrath of God for non-believers only made me wonder: Do we not all pray to the same God — a God who is manifested in nature, colours, happiness and love? Why would he punish me for being a Hindu?

Somewhere along this relentless persuasion, came that horrifying threat of harming my family – I gave in. My approval followed a small ceremony in which I was forced to embrace Islam and later married off to the man who will always be remembered as the ‘messiah’ who for saved me from the unknown territory of sin and infidelity I was treading on.

After the ceremony, instead of receiving blessings for a happy and prosperous life ahead, I was immediately escorted to a local court where a Muslim magistrate declared my conversion and marriage in accordance with the law.

The news of my conversion and marriage to a Muslim man spread like wildfire. I dreaded the moment of meeting my parents. I never wanted to see pain and agony on their faces let alone be the reason for all their grief. Sure enough, one look at my mother made me yearn for my own death.

Looking at all the faces that once seemed familiar; I wondered: who am I?

I am one but share the pain of many. I am Rachna Kumari, Rinkle Kumari, Manisha Kumari and the many more Hindu girls who will be forced to convert in Pakistan. I am the fear of their families and the agony that they undergo. I am the misery of those girls who die a little every day for the injustices done to them.

I am a minority living in an intolerant society.

Can you even begin to imagine not only her own distress as a child, but also the distress of her parents.

Faiza Mirza is a great writer, and courageously writes about the things that really matter, Here is a list to other articles by her on Dawn.com (part of Pakistan’s oldest and most widely read English-language newspaper) where she writes and bravely speaks out against honour killings, the oppression of minorities in Pakistan, child prostitution, and forced child marriages.

You might wonder why non-Muslims would have chosen to settle in Pakistan, so let me give you a bit of history. Pakistan was created as a secular dominion in 1947 with George VI as King of Pakistan (yes really). When he died in 1952, Queen Elizabeth II became queen of Pakistan. It was only in 1956 that things changed and it became an Islamic Republic, but that quickly stalled and until 1970 it was a military dictatorship. Civilian rule did not last long, the military were back in 77 and remained until 88. During all this there has also been a rising tide of increased Islamization that has put them on the path to becoming an Islamic  theocratic dictatorship. They are not there yet in name, but are in reality exactly that in many regions. There still exists a considerable degree of diversity, but I suspect that the rising tide of fanatical Islam will in time clamp down as the violence and intimidation against anything that is not “them” takes hold.