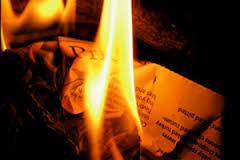 Rimsha Masih is an 11-year-old girl in Pakistan who has Down’s syndrome, and has been arrested and thrown into prison for the crime of Blasphemy.

The background is that the girl’s family were sweepers — work shunned by Muslims but common among poor Christians — and lived in a slum area in Islamabad. Malik Amjad, the landlord of her family’s rented house, explained that the controversy started early last week after his nephew saw 11 year old Masih holding a burned copy of the Noorani Qaida (a book used to help people to recite the Quran with correct accent and pronunciation), so this clueless nephew informed a local cleric, Khalid Jadoon.

Apparently nobody was bothered initially until the cleric and two conservative shopkeepers stepped in and turned it all into a big deal. Here is how it panned out …

“He tried to shame people by saying, ‘What good are your prayers if the Koran is being burnt?’ ” Mr. Amjad said.

Mr. Amjad said he handed the girl over to the police for her own protection and criticized the cleric’s role. “He exaggerated the incident and provoked people,” he said.

It was not clear how, or even if, Ms. Masih had come across the burned religious book. One neighbor, Malik Shahid, said it might have simply become accidentally swept up in a trash pile she was collecting.

So why do the police go along with all this, why would they put an 11-year-old girl into prison, are they to blame? The problem is that blasphemy is a crime in Pakistan, so the police have no choice, they must register it and also often need to lock up the accused against their own wishes. If they don’t, then they risk mob violence against the accused or even their own officers. This is a real possibility, last July a large crowd, prompted by statements from local mosques,swarmed a police station in Bahawalpur district in southern Punjab, searching for a blasphemy suspect who was being interrogated by police. The mob seized the man, beat him to death and burned his body outside the station. This is not unique, the month prior to that a similar mob attack occurred in June in Karachi, Pakistan’s most populous city, although in that case the police beat back the protesters.

Pakistan is essentially becoming a one sect theocratic dictatorship and all pretence at being any sort of democracy is revealed to be a complete sham.  Simply mouth the correct religious incantations and you can wander out and murder with complete impunity and the full support of local clerics. Minorities are now truly an endangered species. Atrocities are no longer rare occurances, but are instead rapidly becoming the norm and almost daily. Last week, gunmen executed 25 Shiites after taking them off a bus near Mansehra, in northwestern Khyber-Pakhtunkhwa Province. Their crime … they simply belonged to the wrong Islamic sect. On Saturday, Hindu leaders in Sindh called on the government to protect their community from forced conversions by Muslim extremists.

The case of 11 year old Rimsha Masih has thrown an international spotlight on all this, the BBC reports on a visit by Xavier P William…

I met the family and the locals. The situation is very tense.

The police have advised Pakistan’s minister for national harmony, Paul Bhatti not to send back many of the Christian residents that fled the neighbourhood after the unrest erupted.

I met the girl at the police station when she was arrested and she is suffering from trauma.

Despite Eid, the situation remains tense. We have demanded a first information report (FIR) be written against the cleric who demanded that the police handover the girl so that she can be burnt alive.

An FIR is a written document prepared by police when they receive information about the commission of an offence. The girl is suffering from Down’s syndrome, she was unable to speak and answer the questions asked about the incident.

Her medical report confirms that she in mentally challenged and was not aware of her actions.

Although the police said that she had admitted the incident, she is a child, she didn’t do anything intentionally – her actions must be treated as such.

The crowd wanted to burn her alive, this is a condemnable act and a clear violation of human rights.

The above might appear to be encouraging, but it solves nothing. Senior government and police officials have stated that the accusations against 11 year old Rimsha were baseless and predicted that the case would ultimately be dropped, but even if the girl is now released, she and her family are at high risk from the locals, all because some cleric fanned the flames of fanatical belief.

The concept of Blasphemy is simply a license for intolerance, very often leads to violence and oppression, and is at odds with very basic human rights such as freedom of thought and also freedom of speech; it needs to be vigorously opposed. What makes it utterly insane is that from the viewpoint of almost any belief, every other belief is Blasphemy.

People should of course be free to believe whatever they wish, but others should also have the right to declare such beliefs to be fucking ridiculous and to say so in public without any fear of intimidation or death.