OK, a bit of fun today, nothing too serious, here now I take a quick look at my top 5 Christmas myths.

1. Jesus was Born on 25th December

Hopefully most of you are indeed aware that the date, 25th December, is not actually the specific day Jesus was born. The reason is of course clear, nobody actually knows, and the bible claims no specific day, so why is it deemed to be the day?

What we do know is that by about the 4th century the western (Catholic) churches has decided that Christmas day was 25th December. Oh but wait, if you do accept even that, then you still have a problem. Dec 25th then was the old Julian Calendar, so if you stuck (if will forgive the term) religiously to that specific day you have a problem. We now use the Gregorian calendar and so that would place that specific day sometime in January.

Anyway, that aside, why 25th December?

In the pre-Christian age, winter festivals – especially those centered on the winter solstice – were the most popular. It was deep in the winter and people were not busy as they usually were at other times of the year with agricultural work. Much of what we now associate with our modern understanding has also inherited a great deal from such festivals, including gift-giving and merrymaking from the Roman Saturnalia, greenery, lights, and charity from the Roman New Year, and Yule logs and various foods from Germanic feasts.

In fact, the choice of the 25th Dec is most probably down to just one man – the Roman Emperor Constantine. He used religion as a tool of the state to pull together a vast diverse empire, and so adopted and promoted Christianity as the official state belief. From that we can clearly see how it became a rather simple step to just re-badge the prevailing winter festivals that were already popular, and so Saturnalia becomes Christmas. This was a festival that involved a religious sacrifice at the temple of Saturn, followed by a banquet, gift giving, and parties – and yes that really is quite similar to what we do today – a religious service, Christmas Dinner, gifts and a party in the evening.

In a word … nope, not three, and also not “wise men”. The actual story in the bible describes how a group of astrologers (yes really, they read the stars), detected the birth in their reading of the stars, and so decided to go on a visit.

They were not just down the road and so would have taken some time to get there, and would have arrived months or even years after the event (assuming of course that the description we read is factual … which to be honest, I seriously doubt).

Well, the myth is that they brought three gifts, hence there is an assumption that there were three of them.

So what does the text actually say?

…and, lo, the star, which they saw in the east, went before them, till it came and stood over where the young child was. When they saw the star, they rejoiced with exceeding great joy. And when they were come into the house, they saw the young child with Mary his mother, and fell down, and worshipped him: and when they had opened their treasures, they presented unto him gifts; gold, and frankincense, and myrrh.

So a couple of points there …

3. The Manger, The Stable and the Shepherds

Now this is where it all gets even more interesting. We have in our minds a story that involves a lot of things, but it is all a bit odd because what we think the story says and what is actually in the bible are distinctly different.

In Matthew we discover that Mary and Joseph lived in Bethlehem in their own house.

Meanwhile over in Luke we find an entirely different story. Here we find that Mary and Joseph live in Nazareth and needed to travel to  Bethlehem for a census. That is of course quite clearly nonsense and is totally contrived to get it all to fit. The Roman Tax system was based on  property and ownership of land, there was never any such census based upon ancestry, Roman taxation simply did not operate like that.

Instead, we discover that Joseph and Mary travel on to Jerusalem right after the birth. Luke’s theme is different, he is describing a prophet for everybody, and so when he is presented in the temple, he is declared to be a light for the gentiles. Once done, they head back home to Nazareth

So why are these two accounts so different?

Quite clearly both authors needed to contend with the fact that it was common knowledge that Jesus came from Galilee, yet if he was to be the messiah, then he needed to have been born in Bethlehem, the town of Kind David, so they each contrived elaborate, but quite different stories that fitted in with their view of who they believed him to be.

“The differences are  significant and should not  be downplayed as if Mark  and Luke were portraying Jesus in precisely the same  way. When modern readers act as if they were…they take neither account  seriously, but rather create their own account.”  – Bart Eherman : NewTestament scholar

In 1931 the Coca-Cola Company commissioned an artist, Michigan-born illustrator Haddon Sundblom, to develop advertising images using Santa Claus — showing Santa himself, not a man dressed as Santa. The result was an image that was “warm, friendly, pleasantly plump and human,” as described on the company’s website. In fact, here it is .. 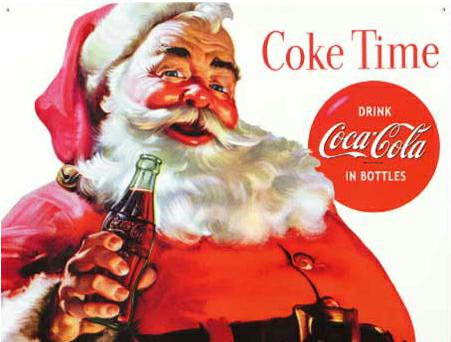 Yikes, have I really just given Coca-Cola some free advertising …. sigh!

So anyway, if you read on, the Coke site claim that they invented the modern image …

The Santa Claus we all know and love — that big, jolly man in the red suit with a white beard — didn’t always look that way. In fact, many people are surprised to learn that prior to 1931, Santa was depicted as everything from a tall gaunt man to a spooky-looking elf. He has donned a bishop’s robe and a Norse huntsman’s animal skin.

Is this really true? Partially, in the sense that they may have popularised the image, but they did not in any way invent it as they claim.

The idea of a portly, joyous, white-bearded man—sometimes with spectacles—wearing a red coat with white collar and cuffs, white-cuffed red trousers, and black leather belt and boots, was popularised in the 19th century by the 1823 poem “A Visit From St. Nicholas” and helped along by caricaturist and political cartoonist Thomas Nast. To drive that point home, here is Nast’s 1881 image of Santa, and as you can see, is very similar to the image supposedly “invented” by Coke almost 50 years later. 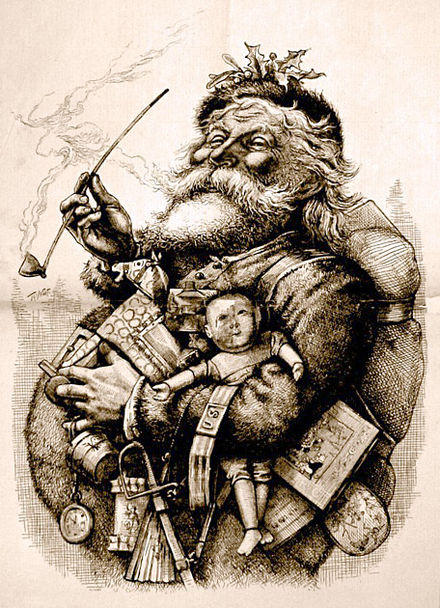 We tend to carry an image in our heads of what Christmas is all about, but much of that is quite recent. We can in fact turn back not too far to find a rather different description of the day, to no less a work than “A Christmas Carol” by Charles Dickens … which ironically probably helped to shape our current cultural image of the day.

On the morning after his visitations, within Chapter 5 Scrooge wakes up and …

Running to the window, he opened it, and put out his stirring, cold cold, piping for the blood to dance to; Golden sunlight; Heavenly sky; sweet fresh air; merry bells. Oh, glorious. Glorious!

“What’s to-day?” cried Scrooge, calling downward to a boy in Sunday clothes, who perhaps had loitered in to look about him.

“Eh? ” returned the boy, with all his might of wonder.

“Do you know the Poulterer’s, in the next street but one, at the corner?” Scrooge inquired.

“I should hope I did,” replied the lad.

“An intelligent boy!” said Scrooge. “A remarkable boy! Do you know whether they’ve sold the prize Turkey that was hanging up there? Not the little prize Turkey; the big one?”

“What, the one as big as me?” returned the boy.

“What a delightful boy!” said Scrooge. “It’s a pleasure to talk to him. Yes, my buck!”

Now, there is one important observation I wanted to draw out from the above. It is Christmas Day … and the shops are expected to be open. It its time is was a festival, but not as we think of it, because commercial activity carried on as it would on any other day.

So there you have it folks, my top five seasonal myths.