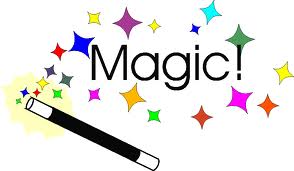 Giles Fraser has been writing in the Guardian again, and yes, this is the C of E cleric who was once Cannon of St Paul’s but quit because he stuck to his principles and refused to eject protesters outside the cathedral.

Anyway, he is arguing against magic, and uses that term to describe an irrational belief, in fact he describes it like this …

What do I mean by magic? Forget Merlin. Forget Potter. I mean the belief that there is ever a short cut out of the constituent limitations of our humanity. That there is a way, instantly, with the flick of a wand or a credit card, of changing ourselves from one thing to something else entirely. Abracadabra. Magic is the escape fantasy of those who cannot cope with the fact that we are limited creatures, that we will grow old and die, that we can never have everything, that we will always be dependent on food and oxygen and the love of others, and that, because of this, we will often feel pain and loss. Magic is the belief that there is some other way of dealing with all of this other than simply by dealing with it.

You know what, that is exactly right (is this guy really a cleric).

If you then read on, you find …

We think becoming a pop star will plug the longing within – ignoring the evidence of those many pop stars who tragically take their own life as they realise the Simon Cowell brand of promised magic is a lie. We play the lotto. And every night on our TV screens, advertising offers us the contemporary equivalent of the philosopher’s stone (turning lead into gold) and the fabled elixir of life. All of this, at root, is an attempt to escape from something that cannot be escaped from. Escape from the ordinary conditions of life. Escape from the anxiety within ourselves.

… at which you now go, “Ah, I can see where this is going”, in fact it is exactly what you expect, because this is how it all pans out …

…religion is a process of disenchantment from the persistent belief that we are the centre of the universe. What is the secular equivalent to this admonition? I don’t see one. Everywhere, we are told that we can (with what Marx called “the magic of money”) be transformed into mini gods – rock gods, sex gods, masters of the universe. And the most trenchant atheists and sceptics of this magical religion are – or at least ought to be – those who worship in a stable.

He is quite rightly arguing against irrational beliefs, but then rather bizarrely, slips in a claim that his belief in magic is just fine and dandy.

OK, lets examine all this and see where it goes wrong.

The first point to make is that the claim that we have all bought into some belief regarding the iconic status of being a pop star, or that we all buy into the advertising as a form of escapism, is simply not true. There is no evidence for this, it may indeed be believed by many and have risen to the status of urban legend, but is far too simplistic and does not in any way describe reality. People, as individuals are just not like that. Sure you might find a few kids who have pop star dreams, sure you will find a few who love to rush out to the new-year sales, but even then these are not activities that completely and utterly rule their lives, that is too simplistic. The actual motivations, dreams and aspirations of humans are vast and diverse and cannot be hemmed in using such simplistic descriptions.

The next claim is that “religion is a process of disenchantment from the persistent belief that we are the centre of the universe“. This is pure unadulterated nonsense, it is religion that pushes the idea that you are in fact the centre of the universe, that the entire universe, all 100 billion galaxies, each with 100 billion stars, was especially created for just us by a supernatural being that used magic. In stark contrast, it is science that open our eyes to the reality of who we are, where we are, and what our origins really are.

He then rolls out the claim that there is some mysterious religion of money. Does that make the Bank of England a Cathedral, can we now consider the governor of the bank of England to be an archbishop, or that every local bank manager is a priest?

What is actually going on here is the usual theist attempt at role reversal. Skeptics of religious claims will, quite rightly, point out that religious claims are simply a form of escapism, and consists at their core in a belief in magic, all Mr Fraser is doing here is to attempt to switch roles here. It might indeed fool some religious folks, but no amount of hand waving can avoid the stark reality that when it comes to an irrational belief in magic, religion has cornered the market.