It is perhaps statistically inevitable that you will at some point encounter a deeply religious person who would like you to convert. It is of course like this because the beliefs that we have today thrive because they have been naturally selected for their ability to both tap into human emotions and to also successfully propagate by motivating those inside to reach out.

So what should you do when you have such an encounter?

Hint: getting in their face and telling them that they are being absurd / stupid / daft / irrational / etc… will not lead to a productive intervention and you will most probably either seriously tick them off, or perhaps even encourage them because you would be deemed to be the voice of Satan trying to discourage and that would perhaps be seen as evidence that they truly are doing something for god.

A friendly conversation is of course a viable option, but if you engage to simply score points, then you are doing it for the wrong reasons. Anyway, assuming you do want to make a real difference and gently nudge somebody along the road to a far more rational conclusion, then wisdom garnished with a bit of experience will soon lead you to the conclusion that within this arena you can never tell anybody anything, and instead appreciate that they can only really work things out for themselves. This is perhaps best accomplished via the deployment of Socratic questioning, and also stepping around fringe issues and cutting right to the heart of the matter.

Distractions will arise, topics such as the origin of the universe, or creationism, will be offered, but these are all fringe issues, symptoms and not a root cause. If you did indeed take somebody steeped in an irrational belief, and gently walked them though the available evidence for one of these fringe topics, then you would soon  make the discovery that such a discussion changes nothing. A rejection of the scientific consensus is not the reason why people embrace weird ideas, it is simply a symptom. Sort out the root cause and the rest will naturally work itself out. Avoid the fringe issues and utilise questions such as …

So why do you believe?

What leads you to conclude that such an experience is a reliable way for working out what is really true?

How do you work out what is really true?

If truly interested in having such conversations, then I can recommend that reading a book such as Dr. Peter Boghossian’s ‘A Manual for Creating Atheists’ will be a great place to start.

You can find it here on Amazon (No, I don’t get a cut for recommending it), and there you will find lots of positive reviews. Part of the description reads …

Peter Boghossian draws on the tools he has developed and used for more than twenty years as a philosopher and educator to teach how to engage the faithful in conversations that will help them value reason and rationality, cast doubt on their religious beliefs, mistrust their faith, abandon superstition and irrationality, and ultimately embrace reason.

OK, but what about the outrageously offensive?

Well, often the best response is not to counter with specific well-known anglo-saxon phrases, but rather to deploy humour. It might indeed end up ticking them off, but everybody else enjoys the entertainment.

What am I getting at?

Well here is an example – Out on the street in Chester in the UK a few days ago we had deeply religious folks announcing to the world that anybody who is gay is both wicked and evil, and destined to burn in hell. They basically lined up in the high street on that specific day because it was the day of the gay pride march. 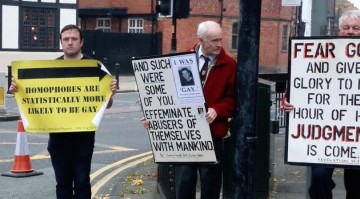 He is not mocking them, but rather making a point in a rather funny and truly entertaining way, that statistically the people who are very vocally anti-gay are in reality far more lightly to be gay, and the root cause of their hostility is often due to their own inability to come to terms with themselves and who they are.

Is that really true?

Yes – https://www.psychologytoday.com/files/u47/Henry_et_al.pdf (and I love that he also quoted the reference to the paper at the bottom of his poster)

So here is how it played out that day, he managed to turn it all in quite an entertaining session and the crowd loved him.

How we deal with bigots in Chester from Big Heritage on Vimeo.