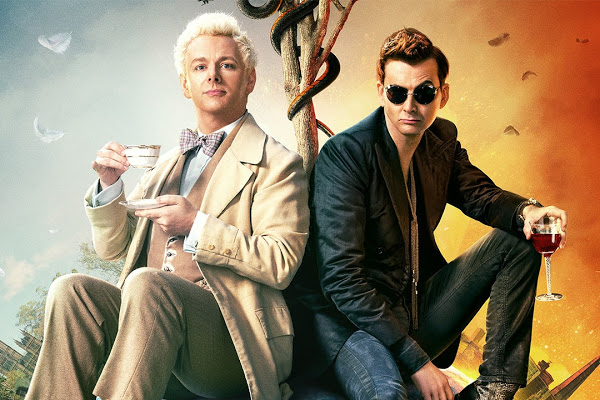 This is quite frankly hilarious. The UK’s Guardian (and various other media outlets) report that a petition has been launched that asks for Netflix to cancel Good Omens. The Guardian explains …

The six-part series was released last month, starring David Tennant as the demon Crowley and Michael Sheen as the angel Aziraphale, who collaborate to prevent the coming of the antichrist and an imminent apocalypse. Pratchett’s last request to Gaiman before he died was that he adapt the novel they wrote together; Gaiman wrote the screenplay andworked as showrunner on the BBC/Amazon co-production, which the Radio Times called “a devilishly funny love letter to the book”.

But Christians marshalled by the Return to Order campaign, an offshoot of the US Foundation for a Christian Civilisation, disagree. More than 20,000 supporters have signed a petition in which they say that Good Omens is “another step to make satanism appear normal, light and acceptable”, and “mocks God’s wisdom”. God, they complain, is “voiced by a woman” – Frances McDormand – the antichrist is a “normal kid” and, most importantly, “this type of video makes light of Truth, Error, Good and Evil, and destroys the barriers of horror that society still has for the devil”. They are calling on Netflix to cancel the show.

Why is the stupidity of this truly funny

I get that there are devoted and committed Christians of various flavours who do not like fantasy such as Good Omens. For example, a rather popular target has been the Harry Potter books. The basis for such opposition is that fantasy such as this is supposedly occult or Satanic. (Hint: the clue is actually in the word “fantasy”). So far there have been at least six Harry Potter book burnings in the U.S.

Is anybody truly bothered by that?

Not really, it is simply a modern superstition manifesting itself.

So why is this latest example utterly stupid and also truly funny?

The petition, signed by over 20,000 Christians, is demanding that Netflix cancel Good Omens.

The punchline here is that “Good Omens” has nothing to do with Netflix, it is not available via their platform. The series was funded and made available via a completely different streaming platform – Amazon Prime.

If your beliefs tells you to not like a book or movie, then don’t read or watch it. If however you are attempting to impose your beliefs on the rest of us, then you can quite frankly F off.