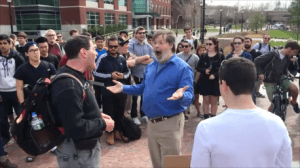 Folks who are fully committed hell-fire and brimstone evangelical preachers will often pop up in various public locations to tell you all about Jesus. They are compelled to do so because part of the success of the belief is not simply that it plays a psychological trick upon you by getting you to buy into ideas that are not actually true, it will also ensnare some to such a degree that it will motivate them to go and ensnare others.

There is very clearly a deep emotional investment and so no amount of rational argument will ever convince a street preacher.

Now, if that is the case, then how can you possibly respond?

If you don’t know the story, then skip this bit – Jesus dies.

OK, so what I’m really saying is that whenever you are faced with crazy, quite often a good response is to be equally crazy and deploy some gentle satire and mockery as a response.

Here is a recent example from last Tuesday

Some itinerant evangelists turned up at the University of Connecticut and proceed to do their “Evolution is a Lie” thing. When the local anthropology professor, James Boster, saw what was up as he passed by, he stopped to respond. He was of course more than a tad annoyed to find some ignorant twats telling him that the stuff he had devoted his life to studying was bullshit, so here is what happened …

“He asked me if I had accepted Darwin as my lord and savior,” Karns stated. “He was very agitated, very demonstrative. … It was very unbecoming of a professor.”

… “He started to address the students as ‘My brothers and sisters of Darwin,’” he recalled.

“I want you to join me in saying, ‘Praise Darwin!’” Boster declared, as the students echoed his refrain. “Amen!” he proclaimed.

Boster then instructed the students to “feel your spiritual kinship not just with other humans, but also with your fellow mammals.”

“We are all bonded together in that great spiritual web,” he stated. “The divine saturates nature the way that gravy saturates cornbread.”

So in essence, Don now gets a taste of how we all feel when he turns up to spout complete and utter bullshit. Hopefully he will ponder on that and learn something from it, but alas I suspect not, and will instead deem it to be an attack by Satan.

Meanwhile everybody else was quite entertained by it all.

Additional Note from James Boster on the Story I quote from

I believe that this account does not accurately reflect what actually transpired.

The street preachers who came to UConn did not show respect for the values of the university community they visited and so received from me all the respect that they earned. If you Google “Boster Waorani” you will find that I have praised Christian missionaries for their work for in ending a seemingly endless cycle of revenge killing among the Waorani, a group of native South Americans. I believe that genuine Christians are very impressive human beings if you actually happen to meet one. They are the ones who have read and have acted in accordance with Matthew Chapter 5 in their daily lives. These recent guests to our campus were rude and insulting: they claimed that UConn students and faculty (not themselves) were all sinners, they singled me out as having descended from a monkey, and stated that the subject I teach (evolution) is a lie. But I rose to confront them when they told a student that he was going to hell. In much the same way that most of you would probably be willing to defend those who you see as members of your community, I properly defended the members of mine and the values of the university. I answered the street preachers using the tone and rhetorical style that they had used themselves. I had not “gone ape” but instead was engaging in street theater geared to respond to the tone that they themselves had set. Given that almost all of you were not there and did not observe for yourself the entirety of what actually happened. I suggest that you not judge lest you be judged and not to bear false witness.

1 thought on “Responding to Jesus Preachers with Satire and Mockery”