I have two stories for you today that relate to Cosmos, the fabulous science based TV show hosted by Neil DeGrasse Tyson –  one is fake and is simply satire, but the other is quite real.

So here there are …

So which is the satire and which is real?

OK, let me give you a bit more of each …

During opening credits to the show, teacher Sandra McAllister reports that several children immediately said they felt ‘groggy and dizzy’.

“One of my students become incontinent of urine, instantly, the moment the narrator [Neil DeGrasse Tyson] voice started up.  It was instant.  Then the children all started behaving abnormally, fidgeting and cussing.  One boy stood up and started growling in a very eerie manner.”

Shocked and worried perhaps her classroom had a gas leak, McAllister quickly signaled to the office that something was not right and immediately began to evacuate her 27-student classroom.

Furious parents and citizens of Oklahoma took to the streets early Thursday, protesting against Neil DeGrasse Tyson’s Cosmos.  Protesters allege the show is blatantly promoting an anti-Creationist agenda and is ‘standing against the Judeo-Christian moors and values of the Saddleback Township community and others nationwide.”

Have you worked out which is the real story yet?

OK, so which story is the fake and which is real?

It is confession time, I lied, because neither of them is actually true at all, both are satire.

Now here is a thought, did you seriously consider the distinct possibility that one of these might be real?

Here is my real Point

The following is a rather common myth that prevails today … 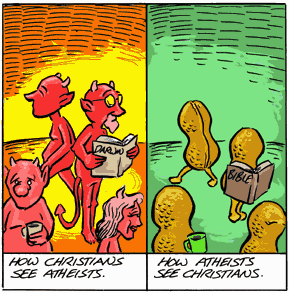 The first is indeed truly believed to be factual by many of the religious, and the second is also truly believed by many non-religious … yet neither is actually true at all.

No there are not bands of atheists rooming the countryside raping and pillaging as the go, the truth is that most humans, regardless of their belief or non-belief are both decent and honourable, and also strive to live a good life; the religious have no monopoly or exclusive claim to morality. They might like to think that they do, and truly believe that they do, but they do not.

Now, let’s turn that coin over and look at the other side. It may indeed be very tempting to label people who retain religious beliefs to be nuts, but the facts simply do not back that up in any way. There are indeed some truly crazy ideas floating about in the public domain, both religious ideas and also non-religious ideas, and rather sadly non-religious people are just as prone to embracing ideas that are not factual.

Smart Intelligent people can and do embrace ideas that are simply wrong – we are all at risk.

As an example, let’s consider Bill Maher – I like the guy, he is smart, intelligent, and also does a great show. He is not a religious man and is critical of religion and views it as highly destructive, and I agree with that, I believe he has that correct. However, he is also anti-vaccine for what can best be described as highly irrational reasons.

So how is it possible to get it so right on one topic and yet ever so wrong on another?

Basically because smart intelligent humans can be easily fooled – we are all prone to this – no exceptions.

This is why critical thinking matters, and why it is important to be open to the distinct possibility that you may indeed be wrong about anything and everything and to not simply flow with the popular opinion, but to follow the evidence.