Today marks the date on which Pakistan made it illegal to hold the wrong Islamic belief.

Thirty years ago today, on 26th April 1984, Pakistan amended its penal code to target Ahmadiyya Muslims and made it a criminal offence, punishable by three years imprisonment, for an Ahmadi to call himself a Muslim.

Today’s Times has a letter to mark this date. (sorry, there is a paywall, but you get to see the first bit, so here is that letter in full … 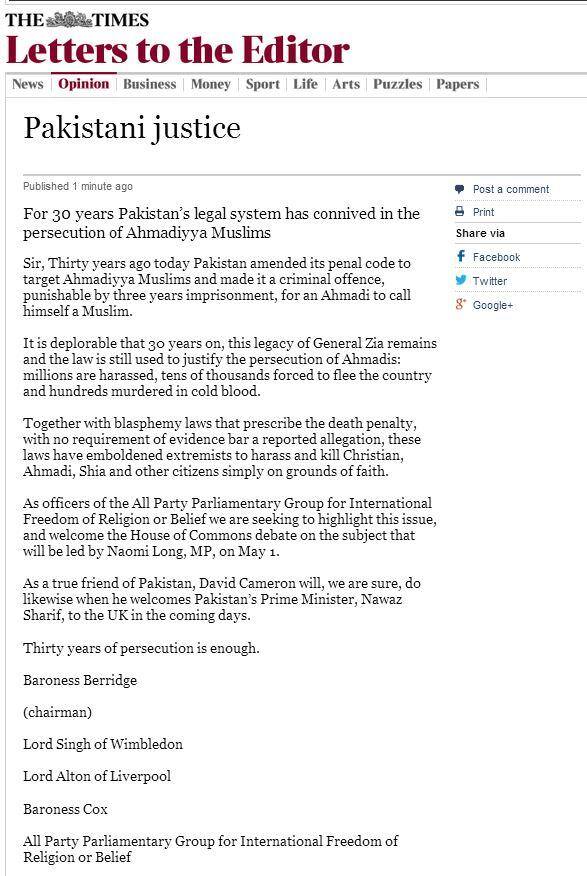 If you read my blog you will know that I’m not religious and that I will openly criticise beliefs that are not true, but it is also rather important to recognise that while beliefs do not have rights, people do.

I passionately believe in and embrace basic human rights.

Pakistan signed up for this in 1948, and yet they openly breach this and have been doing so for quite some time now.

A spotlight needs to be thrown upon this rather shameful bit of privilege that has been granted within Pakistan to one strand of religious thinking – it empowers them to jail people for not thinking the right thoughts.

This entire sorry saga illustrates why it is vitally important for all states to be completely religious neutral and not get into the game of endorsing one specific religious belief, because once you do that then this is where you end up.